"Guys never really get over their toys."

Oh, the joy of walking through a large cavernous toy store. Lots of inventory. Lots of choice. As the proud parent, and uncle of young children growing up in the 1990's, very little offered as much pleasure as shopping for toys. As time has progressed though, children "grew up" earlier, and earlier, as did their tastes for recreational amusement. For decades now, the toy industry has been fighting in retreat as the attention spans of the young have turned to smart phones, tablets, and video games at ever earlier points in their young lives.

The preferences of the kids themselves changed over time. The US toy industry at last count was worth something like $27B a year. The portion of those sales made through e-commerce has ramped up to roughly $17B of that total. Blame the evolution of the US consumer there. Blame Amazon (AMZN) if you like, but it's not just the "Death Star". As of 2016, Walmart (WMT) held a 29.4% market share for US toy sales, as compared to just 13.6% at Toys R Us. The already mentioned Amazon was good for 16.3%.

So, it is now that Toys R US announces the intention to sell or close all of the US and UK stores. It is said that much of the same goes globally. Despite $11B in revenue last year, the firm ...thanks to the change in the way children play, thanks to the stiff competition offered through e-commerce and big box retailers,and thanks to the firm's struggle with more than $5B in debt, Toys R Us was unable to adequately capitalize their stores.

The firm filed for bankruptcy in September, and then suffered through a worse than expected holiday season. The company started missing payments to suppliers, and then ran into questioning lenders. Yesterday, CEO David Brandon referred to the last six months as "pure hell."

Last night, the firm, which, according to the New York Times is owned by Bain Capital, Kohlberg Kravis Roberts, and Vornado Realty Trust had planned to file for liquidation. This came prior to an expected bankruptcy hearing that should take place today. The stores should remain open for some time as they try to liquidate remaining stocks, but this is going to be goodbye for Geoffrey the Giraffe.

Is There A Way To Play This Failure?

Does this mean a greater slice of the pie for Amazon? For Walmart? Maybe even for Target (TGT) ? In the long run, more than likely the easy answer to that question is yes. First though, there will be some pain, even among those surviving competitors, and especially among lead suppliers Hasbro (HAS) , and Mattel (MAT) . There is no cute way to say this, but liquidation events hurt margin across the board, and will also bring those discounted sales forward for the liquidating business drawing bargain shoppers away form those survivors, who might have otherwise made those sales at full price.

Of the five names that I see possibly impacted here, I remains long Amazon, and Walmart. I do not see anyone benefiting in a meaningful way from the liquidation of Toys R Us, except for maybe some of the firm's creditors that are looking to bring something back from the sale instead of losing all. For my own book, I think that this may just be a blip on the radar that quickly passes for Amazon. The firm certainly has momentum going for it, and as an added plus, is not exposed to China. Walmart will benefit later, but will first suffer short term loss of market share, as well as margin compression in their toy department. The same, but to a lesser degree, because they sell less toys to begin with goes for Target.

Hasbro is a good company that is feeling their way through this evolving sector. They did not need this, but that firm will emerge in much the same shape they came into this event after some initial pain. I would not get long HAS here at this level, nor now at this time. We'll take a look at that name below. MAT is trading at 24 times forward looking earnings. already sports negative cash flow, runs total debt that is nearly three times total cash on hand, and currently stands with a current ratio of nearly 2, which does not account for the most likely reduced value of the inventory on deck. Like my colleague at "Stocks Under $10", Chris Versace told you in his piece yesterday, this stock for me, is a no-go.

There is no denying the short-term positive impact that tax code re-write made into law last December has had on both corporate and stock market performance. One simply had to pay attention to earnings calls across nearly every industry group to see how well the law was received by corporate America. Kids, that was only Phase One.

When referring to tax cuts, the president has made mention several times of a Phase Two. The term came up again yesterday, and not just by President Trump, but by Rep. Kevin Brady (R-TX), and by incoming White House Economic Adviser Larry Kudlow. What more could they possibly want to do? The fiscal situation, unless the economy grows it's way out of this mess is clearly tenuous. You did see that in response to the nation's weak showing for February Retail Sales that the Atlanta Fed had to drastically reduce their estimates for first quarter real personal consumption expenditures. This in turn took Atlanta's GDPNow projection model for the quarter from 2.5% annualized all the way down to 1.9%. Eek.

Kudlow, who I have met several times, and truly like by the way, was not afraid to lead toward some specifics on what Phase Two of a tax plan might mean. For one, the authors of such code would like to make the individual portion of the tax cut law passed in December as permanent as are the cuts in corporate taxes. If you recall, these tax cuts expire at the end of 2025 due to the fact that they add more than $1.5T to the "projected" deficit over the next decade. Making these cuts permanent would likely exacerbate the budgetary deficit, but just as likely boost economic growth.

Not everyone is on board...obviously. Democrats came up with their own proposal to increase the top personal tax rate, as well as to increase corporate taxes, so I don't know how the ball ends up rolling the other way all of the sudden. Kudlow also mentioned targeting a lower capital gains tax rate, which was left where it was...at 20% in the last go-round. Where to from here? Is this a way for the right to get out in front of the mid-term elections later this year, as they have been less than victorious in several special elections over recent months? Maybe.

The outcome may well rest on how well Larry Kudlow will articulate the message. Fortunately for him, and the possibility of launching a phase two on tax reform, this is the man's strength. Away from that topic, i will be keeping on eye on how well the president and his new adviser mesh on their expectations for dollar valuations. Known to have preferred opposing directional views on this topic, this will matter as much to markets as will their opposing views on global trade. You will not be bored.

Chart of the Day: Hasbro (HAS) 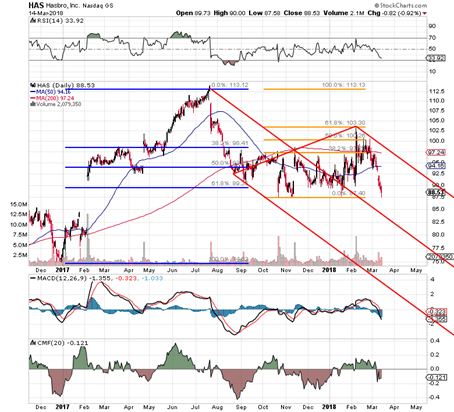 What to notice here? For one, the name has now obeyed Fibonacci's 61.8% re-tracement levels to both the upside,and the downside before hitting something solid. The name is clearly, at least to me...now in a downtrend. Relative Strength. Money Flow, and the daily MACD all support this. On top of that, this name appears to have never truly recovered from the "death cross" experienced back in September when Toys R Us initially filed for bankruptcy.

Enter the Pitchfork. The Pitchfork model suggests that support for the name could deteriorate to the 85 level later this month, and possibly as far as 82.50 by early April. Would I short the stock? I am not so bold. However, if I were one to place a negative bet on the name, but I was also risk adverse, there is a direction that I might go.

Hasbro (HAS) reports quarterly earnings on 9 May. You see the Pitchfork. You know the news. April 20 87.50 puts on this name went out at 2.53 last night. Purchasing one contract will cost a trader $253 (at the last sale). Were said trader to write the April 20 85 puts in conjunction with that purchase (Those puts went out at 1.55), the trader would then have reduced his or her debit on these positions to 98 bucks. The positive is that the potential for profit on these positions is the 2.50 (250 clams) between strike prices less those 98 clams. Capeesh?

Get an email alert each time I write an article for Real Money. Click the "+Follow" next to my byline to this article.
TAGS: Investing | U.S. Equity | Consumer Discretionary | Consumer | Entertainment | E-Commerce | Stocks

The maker of athletic apparel appears to offer more upside opportunity than downside risk based on its charts.

Traders should only go long on strength above $320.

How to Build Long Term Positions in a Market Crash

Dine Brands Global and Royal Caribbean looked cheap a few days ago yet fell a lot more on Thursday, which makes timing an entry challenging.