As the market races to new highs, it becomes more difficult to find under-the-radar names offering significant upside. Restrict that search to the semiconductor space, maybe the most followed space in tech, and the task becomes a mighty tall one.

After spending some time digging, I have three names worthy of consideration here despite possible tariffs, blockage of merger possibilities with Chinese companies, and a market due for a breather.

Kopin (KOPN) , a small, but not new company, was spun out from MIT some two decades earlier. At only a $300 million market capitalization and trading for under $4 per share, Kopin comes with all the disclosures about liquidity and risk. It's not for everyone.

Despite still losing money, the company is in great shape financially. Kopin holds $68.8 million in cash ($0.92 per share) with no debt. In 2017, net cash used in operating activities was around $27 million and Kopin expects to be break even by the end of 2019, so there's no imminent capital raise required.

The company is the leading provider of AR Head Mounted Displays for military applications, which provided the lion's share of last quarter's $11.4 million in revenue. And while military orders remain strong, it's Kopin's future in A/R (augmented reality) and V/R (virtual reality) via wearable tech that makes it appealing. Kopin was granted 12 new patents in the fourth quarter and filed five more. It now holds 300 patents related to wearable applications.

Over the next 12 to 18 months, expect to be hearing more about Kopin as several of its products hit the market including SOLOS smartglasses, ELF VR headsets, and Eagle Display.

SOLOS, a high-resolution microdisplay currently aimed at runners and cyclists, will hold the broadest appeal. These glasses will enable users to obtain data on speed, power, and pace along with "chatting" all via the glasses.

ELF VR will be a headset using OLED (organic light-emitting diode) display offering a 2k by 2k display with a 120 Hz refresh rate all on a one-inch display. The high refresh rate will avoid any lapse in viewing or dizzying caused by lagging.

The Eagle Display will be a 1280 x 720 resolution on a half-inch display that will be like watching an 80-inch TV from 10 feet away. It is expected to begin shipping this year.

Xcerra XCRA, a $600 million company that makes equipment used in testing semiconductor chips during the manufacturing process, recently terminated its agreement to be purchased by Chinese company Hubei Xinyan. 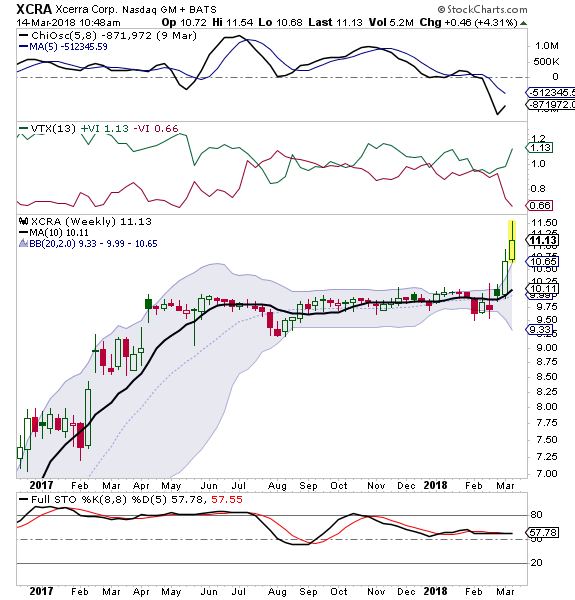 The biggest takeaway here is XCRA shares have barely moved since last April despite sales increasing 40% to $110.3 million and earnings popping 200% to $0.19 per share in the most recent quarter. Next quarter, XCRA anticipates another $0.19 to $0.23 per share in earnings on $110 million-$115 million in revenue.

The only move higher has come in the last few days as the anticipated buyout had capped shares previously. With a P/E ratio in the low teens and a PEG (P/E to growth) ratio below 1, XCRA appears to be a screaming value buy in the semiconductor space. What's kore, it is profitable with almost $3 per share in cash and virtually no debt.

XCRA could easily pop to $14-15 per share here without a buyout and still being a solid value.

Currently, Versum is the key supplier of material consumed during migration of production by NAND memory chipmakers for 2-D to 3-D architecture. This will make VSM sensitive to slowdowns but also a major benefactor during bullish periods. 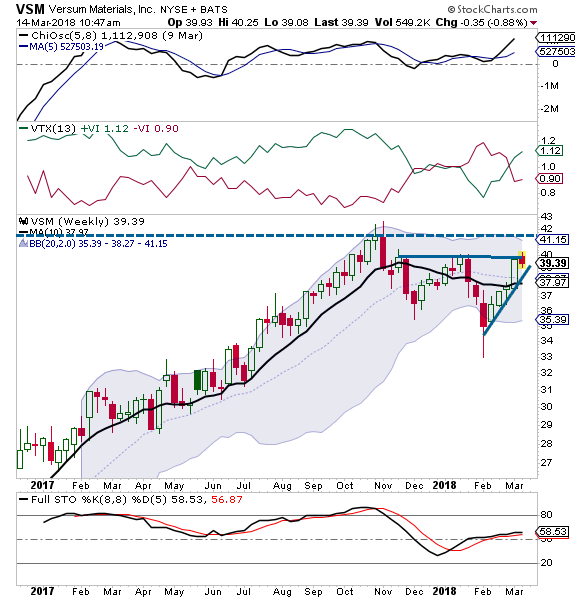 Probably my least favorite name of the three, if the semiconductor cycle continues to hum, Versum should offer consistent performance.

Get an email alert each time I write an article for Real Money. Click the "+Follow" next to my byline to this article.
TAGS: Investing | U.S. Equity | Technology | ETFs | Funds | How-to | Stocks | Stocks Under $10

U.S. Investors to Get Easy ETF Access to Ant Group and China's Nasdaq

Ant Group has passed muster for a Shanghai IPO on the STAR Market, which soon should see its first index-tracking exchange traded funds.