"Much effort, much prosperity"

The catalyst for yesterday's reversal that turned a rally into a beat-down? How much time do you have? Some have come out blaming the president's removal of Secretary of State Rex Tillerson from his post. I don't really think the markets get all that spooked at this point by how volatile the climate in Washington has become. The hands grow calloused. That said, the sacking of one that was considered to be an even tempered business person in favor of someone thought to have more militant views regarding US adversaries could put a bit of a dent in markets, with the notably possible exception of Aerospace & Defense. That industry had started to lag in the wake of a peaceful sounding North Korea. Yes, I do think that the constant turnover in Washington matters. There are simply other factors that matter more.

One significant contributor to the unsteadiness in the markets is the ongoing lack of any increase in the pace of growth for consumer level inflation. Wage growth was perhaps the only disappointing line item in last Friday's BLS report on February employment, and yesterday's February CPI data, also produced by the same BLS, seemed to back that up. Notably, rising prices for apparel appeared to be an outlier within this report for a second month in a row. You did see multi-line retailers swimming upstream yesterday. Didn't you? Macy's (M) ran 3% on the day, while Kohl's (KSS) , Gap Stores (GPS) , and Foot Locker (FL) all scored gains of at least a percent.

That said, the "non-strength" (because you can't really call it weakness) seen for consumer level inflation put the whammy on the long end of the yield curve. This morning, the spread between what Two Year and Ten Year Treasury Notes are giving up is down to little more than 57 basis points, down big from more than 63 when I banged out yesterday's Market Recon. That's tough on traditional bankers, and as you might expect, Financials took it on the chin yesterday, only to be under-performed by the Tech space.

Not me, though I see why others are. It becomes this simple, gang... and I didn't truly see it right away myself. When the president halted the Broadcom (AVGO) takeover of Qualcomm (QCOM) , he in effect, named Qualcomm a champion of US national security. Yesterday, I wrote that I could see the opening up of this deal as potentially provocative for consolidation. Yes, this opens up the space, but only to some. Anyone with large Chinese exposure might be discouraged at this point from making any kind of overtures toward another firm for fear that the other firm might be championed, or that they themselves might be villain-ized. This does not mean that the president was wrong to block this acquisition. I, from my office window can only wonder about the how and why concerning that. This factor, does however...impact price discovery. There is more.

Scuttlebutt made the rounds late yesterday that the US is heading down the road of larger more pointed tariffs aimed at China that would be meant to protect US property right interests. We know that this has been an ongoing impediment to US competitiveness in China, and have considered in this space that maybe this might have been the real aim of the administration, and that the steel and aluminum tariffs were more akin to dipping one's toe in cold water to see how far in one might get before doing anything truly disruptive. In my opinion, a move like this, though perhaps necessary, would not be very well received in the short-term by my beloved tech, or more specifically the semi-conductor space.

Are You Tough Enough?

So, how does the two-fisted home-gamer tackle this environment? That's who I care about. The "Lah-di-dah" brown shoe crowd can go scratch. You are my people. I can't tell you what to do, and I can't tell you what will happen. I can tell you what I think, and what I am doing. I want you to remember this....Strategic investing should not rely upon the whims of a politically volatile environment. Tactical trading? Sure. Go for it. Medium to longer term, I stick with what I see as the trends of demand, and what I believe to be true.

What does that mean exactly? To me that means, three things for now. Most importantly, tech is still king in my book. Yes, I hear you. You think I am a perma-bull on the sector. Well, maybe you're right, but that has been the way to go for eons. Eons, gang, as in decades. Current demand for chips is a story that did not change on Tuesday. Big Data, the Data Center (Cloud), Artificial Intelligence, Autonomous Driving, Voice, Gaming....think these trending technological advances are going to dry up because of a more protectionist environment in Washington? Me neither. I think that given the opportunity, I would rather add to my semi-conductor longs on a dip than sell up here. The only problem for many invested in the space is that even now, net basis costs are so far below last sales that this practice seems prohibited. What to do about that?

Well, use the force, Luke. Those willing to lay out capital that withers over time might go ahead and purchase options as a play on volatility, or better (in my opinion) drag in some revenue by writing calls against established longs. I like to write puts when the premiums are there, in names I am long as way to profit when I am right about a stock heading higher. When I am wrong, I end up owning more shares at a strike price that I thought attractive at the time I wrote the put, less the revenue received. One must be aware of that equity-based risk when playing the game this way, but I have found this to be a valuable tool for portfolio building over time, that often pays for lunch.

For those that can not shake the fear of negative impact regarding China, many of your well known cloud names such as Salesforce (CRM) , Red Hat (RHT) , and Adobe (ADBE) have little to no exposure there, as I am sure you know, neither do Amazon (AMZN) , nor Alphabet (GOOGL) .

There are two non-tech related thoughts running around in my cavernous brain at this time. They both have to do with individuals recently favored by this president. Does the possibility of Larry Kudlow's replacing of Gary Cohn as the economic right hand of President Trump mean anything? I mean in theory, this should be good for infrastructure building, industrial names, and transports. The catch there, and maybe there are two catches...Has that ship already sailed? Are we fiscally able, at this point to pursue such a strategy? Is Kudlow already priced in. I mean, we know that the he and the president are friends. President Trump likely has the man's advice whether he holds position or not. Of my infrastructure building plays, I only still hold United Rentals (URI) , and CSX Corp. (CSX) . I would have to rebuild my book in that arena, probably using the put writing strategy that I just laid out.

Does elevating Mike Pompeo to the role of top diplomat improve, fundamentally the situation that defense contractors find themselves in? Recently peaceful overtures bouncing back and forth between the president of the United States, and the Korean peninsula have put a recent hurt on this high flying space. Pompeo is thought of as both a China, and Iran hardliner. It sounds awful to say, but this could be positive for the group, particularly if the pending meeting between the president and Kim Jong Un either goes poorly, or never happens. I am still long Raytheon (RTN) , which is trading so far above basis cost, as to make adding to the name ridiculous right now, and Lockheed Martin (LMT) , a name that I took a partial profit on when it hit target. I am likely to tack that portion back on if the name drops into the 320's. I will also have to remain cognizant where Northrup Grumman (NOC) , and General Dynamics (GD) are trading. Neither of whom is where I want them for entry as of yet. Same goes (from my perspective) for Boeing (BA) , though that name is obviously not a pure defense play.

Chart Of The Day: Intel (INTC) 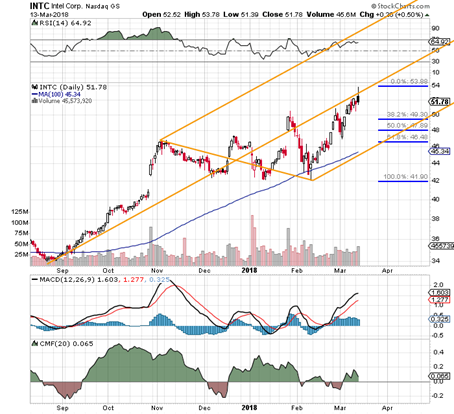 Here's a name that we keep coming back to. How has the breakdown of the Broadcom deal impacted this name's performance. Unlikely it is that the firm still has the interest in AVGO that was rumored over the weekend. Interestingly, I still find the name attractive as I did a few weeks back when I last featured this stock. We still have some basic technical indicators that look okay. Relative Strength is in good shape without overheating. The daily MACD is exceptionally strong, which I would take as a less indicative of short-term action right now given how far above zero both the 12 and 26 day EMAs have run is such a short time. Money Flow is in decent shape as well.

The name clearly has bounced sharply off of that "flash correction" back in early February. That low has formed the elbow of the Pitchfork that had provided support along with the 50 day SMA. However, it is that same Pitchfork model that now presents as rising resistance, which just as clearly has recently slowed the stock's advance. I do not at all see a real disaster brewing here.

Should tech space weakness persist, the name should see some support in the 49.25/30 area. Should there be outright sector rotation, I see increased help just below 48. Not the end of the world. That rising line of resistance we spoke of, allows (INTC) to make a second attempt at the 54 level by April Fool's Day.

An upside break there, well.... I did put a 57 price target on this stock last Monday. That seems worthy of re-iteration at this point. Let's go for May first on that one.

Get an email alert each time I write an article for Real Money. Click the "+Follow" next to my byline to this article.
TAGS: Investing | U.S. Equity | Transportation | Technology | China | Markets | Economy | Politics | Stocks