I saw a new Macy's (M) commercial on TV last night. Really got my attention. Maybe it was part of their new spring campaign. I guess I have to check out WWD more often. The last time I checked out the charts of M was about five weeks ago, where I said, "M needs to rally above $26 to get above the 50-day average and above $28 for a Point and Figure breakout. Longs should risk a close below $22." M rallied above $26 a few days later and then $28 by the end of February so I will assume traders following that strategy are long. Let's see how we should proceed from here.

In this daily chart of M, below, we can see that prices are above the rising 50-day simple moving average line which was not the case in early February. The slope of the 200-day moving average line is also positive now and that is a definite improvement. The daily On-Balance-Volume (OBV) line continues to improve with the price action and tells us that buyers of M have been more aggressive. The 12-day momentum study in the lower panel shows equal highs in December and early March for a bearish divergence when compared to the higher price highs over the same time period. Momentum divergences are not black and white buy and sell signals but they are good wake up calls to watch the price action closer.

In this weekly bar chart of M, below, we can see that M is above the now rising 40-week moving average line. This hasn't been the case for a long time. The weekly OBV line has been firm the last four months and tells us that buyers of M have been more aggressive. The weekly Moving Average Convergence Divergence (MACD) oscillator moved above the zero line in early January for an outright go long signal on this longer time frame.

In this Point and Figure chart of M, below, we can see that prices have been moving sideways in a triangular-like formation. There is a projected price target of $31.78 which would be a new high for the move up should it occur. A decline to $27.53 would be bearish. 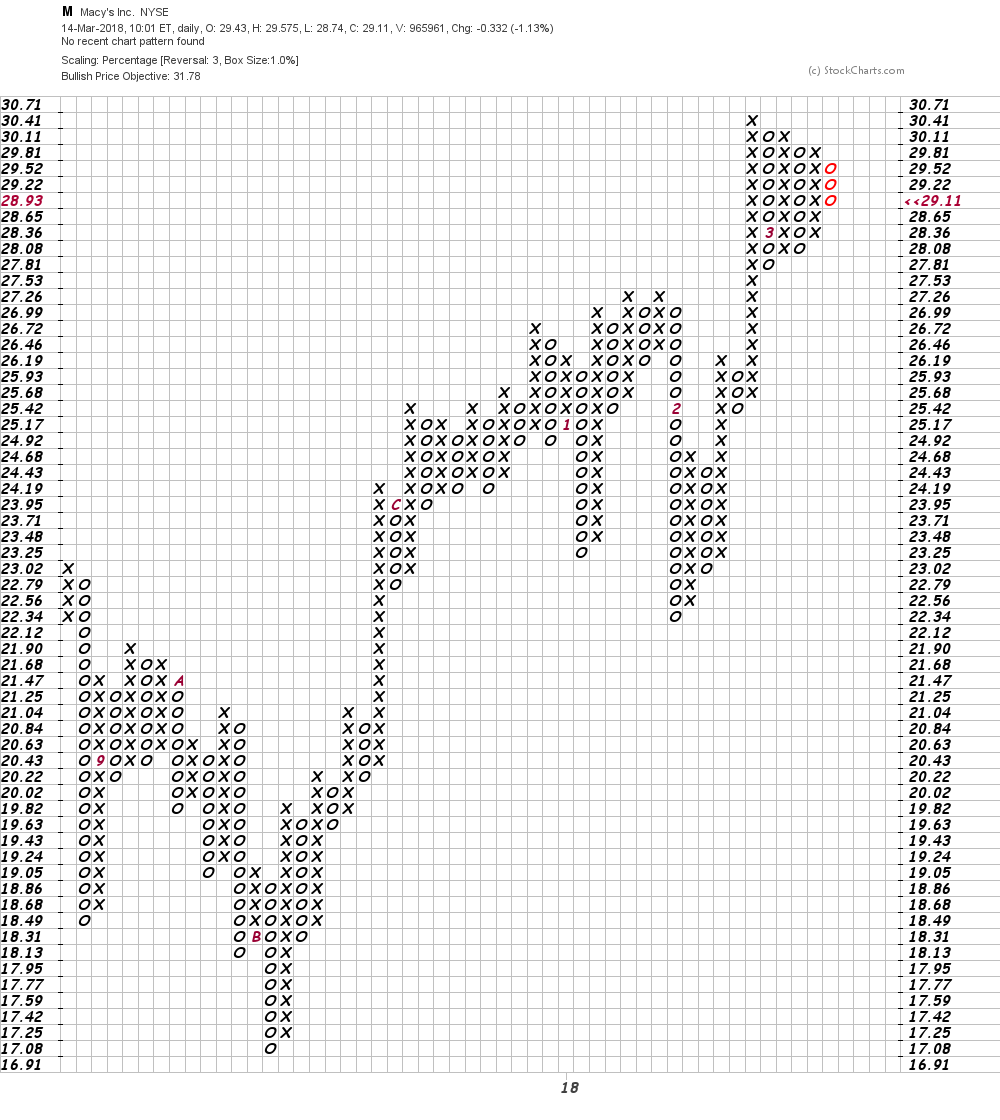 Bottom line -- prices have staged a nice turnaround from the nadir of November. The sideways price action of March is likely to result in another upside breakout and new highs for the move up. Longs should raise sell stop protection $24 now from below $22. $35 is the next upside price target I see when I look at the weekly bar chart.