Dick's Sporting Goods, Inc. (DKS) was reviewed back in August when prices were cascading lower. I summed up the charts this way -- "The $34-$42 area on DKS should act as resistance. Support may develop in the $25-$20 area. A bottom in DKS will take a long time to develop." With the benefit of hindsight we can see that prices made a low around $24 in October/November and traded up to the mid-$30's by January. What lies ahead for this retailer of sporting goods as fickle consumers react to their position on gun sales and everything else?

In this daily bar chart of DKS, below, we can see how prices changed from a downtrend to a sideways trend over the past several months. The indicators have improved a bit in recent months but they are not table pounding buys. Let's look closer.

The daily On-Balance-Volume (OBV) line made a low in November and has crept modestly higher the past three months. Volume was a heavy 21 million shares Tuesday and prices managed to close higher after a sharply lower opening. The higher close yesterday pushed the OBV higher telling us that buyers of DKS were aggressive.

The daily Moving Average Convergence Divergence (MACD) oscillator has been above the zero line since November and could turn to the upside from the zero line if prices advance from here.

In this weekly bar chart of DKS, below, we can see that prices are above the declining 40-week moving average line. A weekly close above $35 will improve this chart. The weekly OBV line made a low in August and has improved the past six months. A move above the January high will be a positive signal.

The weekly MACD oscillator gave a bullish cover shorts buy signal in late October and is just below the zero line now. If this indicator can move above the zero line it will be another plus for the bulls.

In this Point and Figure chart of DKS, below, we can see that a rally to $34 will improve this chart and a decline to $29 will weaken the picture. 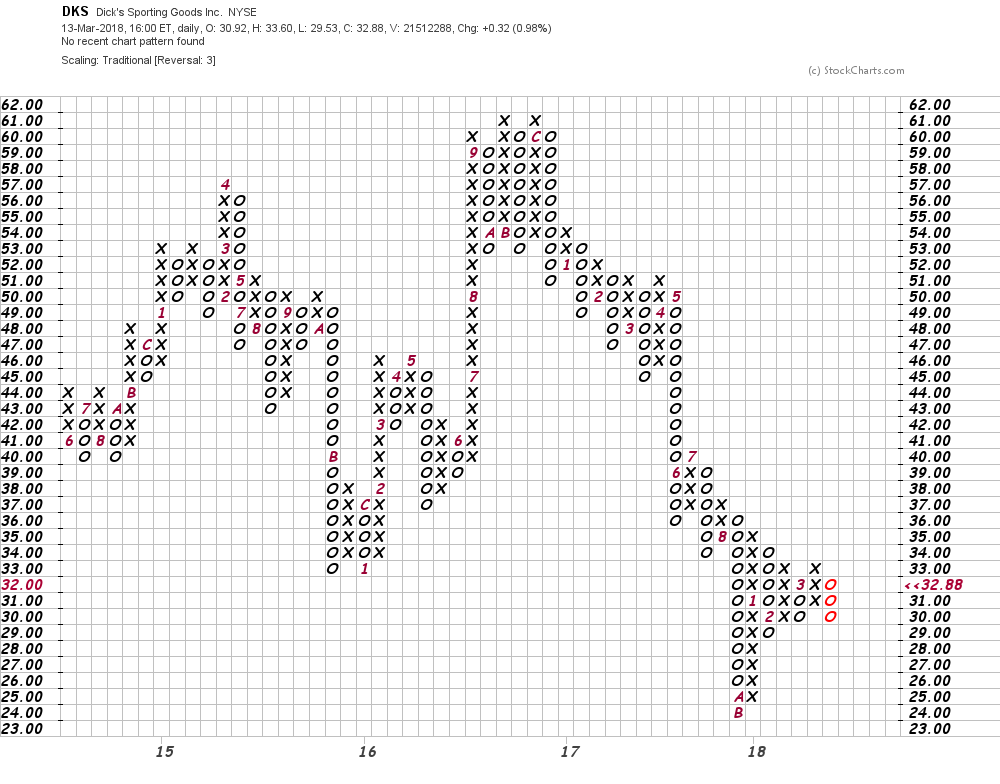 Bottom line: DKS could continue to trade sideways developing its base but a close above $36 will probably produce some further gains. A close below $28 will probably mean a retest of the November low around $24.

Get an email alert each time I write an article for Real Money. Click the "+Follow" next to my byline to this article.
TAGS: Investing | U.S. Equity | Consumer Discretionary | E-Commerce | Sports business | Stocks