We last covered Bed Bath & Beyond (BBBY) in August, writing, "Bottom line: even if the worst of the decline for BBBY is behind us, the stock needs a long period of base building. I am not a fan of bottom picking." The price of BBBY finally made a low in early November around $20 and has been trading sideways in the $20-$24 area. Let's check on the charts and indicators to see if this is enough base building to warrant a bounce or rally.

In this daily bar chart of BBBY, below, we can see that prices have been crossing above and below the 50-day simple moving average line. This kind of price movement is typical as a stock bottoms. BBBY is still below the declining 200-day moving average line but a rally to $26 would change that condition. The volume of trading has not revealed a clear pattern of accumulation which can be seen by increasing volume on rallies and lighter volume on pullbacks.

The daily On-Balance-Volume (OBV) line has improved slightly from its October/November lows but more improvement is needed. In the lower panel of this first chart is the 12-day momentum study. From late September momentum is making higher lows even as prices make lower lows into November. The improving or strengthening momentum picture is a positive sign for prices.

In this weekly bar chart of BBBY, below, we can see how prices were reduced from $75 to $20 over the course of three years. This bull market has not rewarded everyone the same. BBBY is below the declining 40-week moving average line, which has clearly defined the three-year decline.

The weekly OBV line shows a long decline but looks like it is basing the past three months. The weekly Moving Average Convergence Divergence (MACD) crossed to the upside in November for a cover shorts buy signal. Crossing above the zero line would be an outright buy signal but that is probably several weeks away.

In this Point and Figure chart of BBBY, below, we can see more detail of the basing action on BBBY. A trade up at $23.48 will be a double-top breakout and open the way to a possible rally to a $25.59 price target. A trade at $24.92 will be bullish on this chart and we could see prices rally above the 200-day moving average (see chart 1 above). 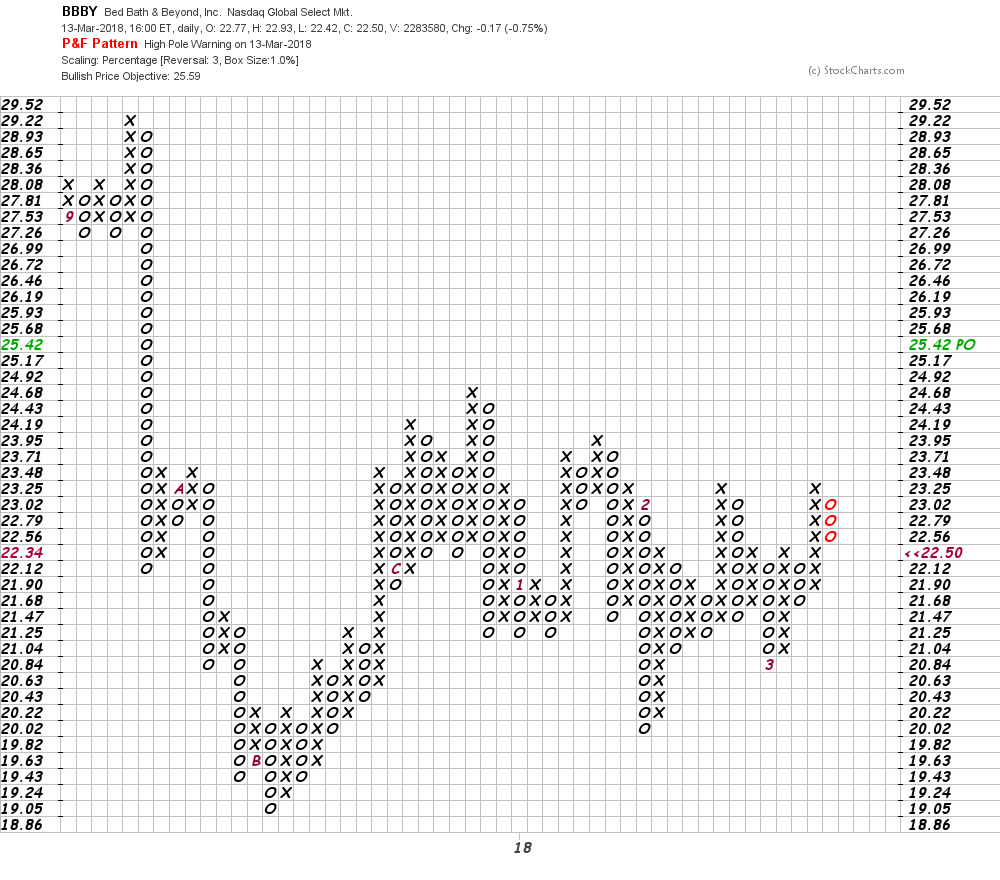 Bottom line: BBBY is working on a turnaround in its stores and online and we can see a similar situation in the charts above. Patient traders could probe the long side of BBBY around $22 risking to $19. Add on strength above $25.