When we took a look at Analog Devices, Inc. (ADI)  in late December, we took a cautious stance, "I got into the business during the 1973-1974 bear market so I tend to worry more about the downside. I would remain cautious of ADI. A decline under $83 would turn me bearish."

Prices pushed higher into January but by mid-month a swift decline got underway ending with a break of the December lows. Prices have recovered from their February low but still remain below the January zenith. Should we continue to remain cautious or have the bulls regained control? Let's check with the latest charts.

In this daily bar chart of ADI, above, we can see a recent key reversal to the downside as a rally into the January highs in the $96-$98 area was rejected. Prices are above the rising 50-day moving average line and the rising 200-day line but that may not be enough. If you look at the volume histogram right below the price chart you can see that volume has been declining since early February. A rally on diminishing volume is typically not to be trusted.

The daily On-Balance-Volume (OBV) line has been moving sideways the past eight weeks and is not foreshadowing an upside price breakout. The trend-following Moving Average Convergence Divergence (MACD) oscillator is above the zero line which is positive but the two moving averages that make up this indicator have begun to narrow and this could become a bearish crossover in the days ahead.

In this weekly bar chart of ADI, above, I see a mixed picture for the indicators I favor. Prices are above the rising 40-week moving average line but another test of the line in the weeks ahead could occur. The level of the trading volume has declined from the pace seen in the middle of 2017 despite the rising price structure.

The weekly OBV line seemed to ignore the fading volume and rose until early January of this year. The OBV line has pulled back the past two months suggesting that sellers of ADI have become more aggressive. The weekly MACD oscillator is trying to cross to the upside for a bullish signal but it has now quite done it just yet. A turn lower for this indicator cannot be ruled out. 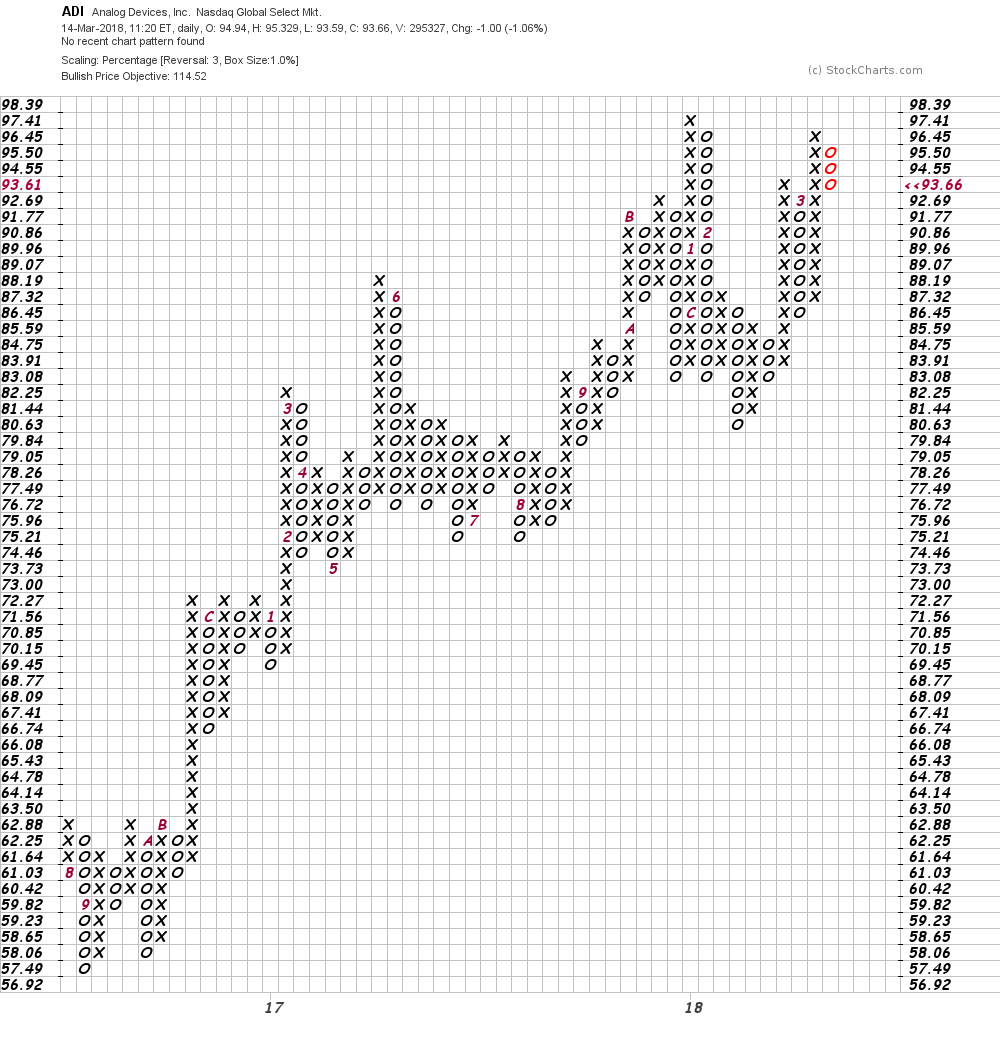 In this Point and Figure chart of ADI, above, we can see a mixed picture. While there is an upside price target of $114.52 being projected it needs to trade up to $98.39 for a breakout. The uptrend from the 2016 lows has been broken (line not shown) and the rally from $80.63 could be considered a rally back to the underside of the uptrend line.

Bottom line: Though the price of ADI has improved from its February low the position of the indicators is not all that constructive. A decline back below $90 is likely to weaken the charts. It will take a couple closes above $98 to prompt me to shift my position.

For example, consider stocks that should benefit from our ever-increasing digital lifestyle.

Our Technical Strategy on MicroStrategy

I Found Something I Like in Microsoft and Apple: Here's How They Stack Up

It's no surprise that MSFT and AAPL are two of my longest holdings.

We're seeing a good supply of strong stocks, despite the moves in the major indexes.