"Problems are not stop signs, they are guidelines." -- Robert H. Schuller

Any of you kids ever play rugby as youngsters? An ancestor of American football, rugby is played with a ball that's somewhat like an American football, only thicker and a little more difficult to handle. Due to its shape, it can often bounce unpredictably.

Well, the ball definitely bounced against Singapore-based Broadcom Ltd. (AVGO) on Monday night -- although I'm not sure that we could say "unpredictably" -- when President Trump blocked the firm's attempts to buy U.S.-headquartered Qualcomm (QCOM) .

"There is credible evidence that leads me to believe that Broadcom, [a] limited company organized under the laws of Singapore, through exercising control of Qualcomm Inc. ... might take actions that threatens to impair the national security of the United States," the president said.

Trump's move should have come as little surprise to anyone, as the U.S. Treasury's Committee on Foreign Investment in the United States (or "CFIUS") had already made plain its concerns over allowing Broadcom to acquire Qualcomm.

And in a move to get ahead of something like this, Broadcom had just announced that the firm was in the final stages of moving back to the United States from Singapore. AVGO announced that this move would be completed by April 3 instead of a previously announced May 6.

Broadcom also wanted the world to know that the firm's executive team is made up entirely of American citizens, and that all of its largest shareholders are U.S. concerns as well. And while the company's U.S. headquarters is in Silicon Valley, the firm employs more than 8.600 folks across 25 U.S. states.

In case you're wondering why AVGO is based in Singapore, the answer is that Avago Technologies -- which merged with U.S.-headquartered Broadcom Corp. in 2016 to create Broadcom Ltd. -- had been headquartered there.

Broadcom CEO Hock Tan grew up in Malaysia, but was educated at the Massachusetts Institute of Technology and is now a U.S. citizen. Tan also announced early on in the Trump presidency that he would move AVGO's global headquarters to the United States.

The issue at the heart of this matter is that Broadcom has ties to several Chinese firms, most notably Huawei, the world's largest telecommunications-equipment manufacturer.

Huawei overtook Ericsson for that title in 2012, and last year, the firm briefly surpassed Apple (AAPL) as the world's No. 2 cell-phone maker. The Chinese company is also working toward becoming a major player in the cloud space as well.

Why would doing business with such a firm represent a problem? Simple: Huawei's relationship with the Chinese government remains murky.

For openers, Huawei was founded by Ren Zhengfei, a former Red Army engineer. The firm also claims to be employee-owned, although it's said that Huawei's employee-shareholders have little information regarding their holdings. Huawei also refers to itself as a "collective" rather than a private company.

Geopolitical concerns aside, what concerns me as a trader and investor is whether Trump's move enhances or diminishes valuations across the tech space, as well as what it means for tech mergers and acquisitions.

Does it now make sense for Broadcom to split into an Asian concern and a U.S. one? That would be one way for the firm to retain all of the relationships already in place while perhaps appeasing U.S. national-security issues.

Meanwhile, Intel (INTC) has made M&A overtures toward Broadcom. Is that for real?

I believe that while markets initially viewed Trump's move negatively, his decision actually makes the semiconductor space even hotter than it was before.

After all, I think there will potentially be an even greater push toward consolidation. And as hot as the semis have seemed, they're for the most part trading at valuations below the rest of the market (including firms that service the group).

I haven't yet seen a comment from Broadcom CEO Hock Tan, but I think it's likely that this is far from over. Broadcom could file lawsuits claiming that the president acted beyond his powers, or that CFIUS didn't take the time to properly investigate the matter.

A Macro Look at Micron

You might recall that I wrote a piece on Feb. 27 about how Micron is one of the best stocks to own. Well, I took my own advice and bought some MU shares they they were trading at $47.98 -- a good move, as they're trading around $60 in premarket action Tuesday after rallying almost 9% Monday.

It's not just the potential for consolidation that's boosting MU. Rather, demand for its products keeps on going and going. DRAM is as hot as ever, while margins are expanding for NAND.

Valuation concerns? It doesn't seem like any exist for Micron. Price-target increases have been raining down on this stock in recent days from the likes of Instinet and Evercore ISI.

The Broadcom news also potentially heats things up for the likes of Lam Research (LRCX) , Applied Materials (AMAT) and MU competitor Western Digital (WDC) . Of course, regular readers already know that I like the chips and chip-makers for the long term.

In fact, the biggest problem for those who invest in this space has been adding on dips, because the "dips" are usually far above many an investor's net cost basis. Let's see what I mean by looking at Micron's chart.

Chart Of The Day No. 1: Micron

What a beauty Micron's chart has turned out to be in the two weeks since I last wrote about the stock!

I've left the blue Fibonacci levels and the orange Pitchfork in place from my Feb. 27 chart: 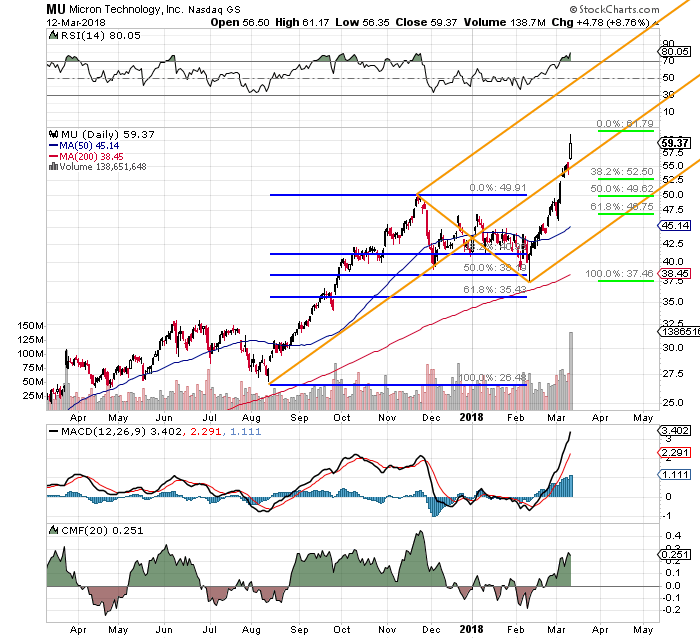 As you can see, this name has obeyed and even exceeded the support that I projected on Feb. 27. Just look at the daily Moving Average Convergence Divergence oscillator (MACD). Parabolic!

Combine that with Relative Strength Index that now stands above 80 on crazy volume and you either have an overbought stock or one where some major news is about to break about the company.

Even if MU reached a short-term peak at Monday's highs, I won't be taking profits at this time. On the contrary, I'm far more likely to add should the stock retrace to the $52.50 area, despite that spot being well above my entry point of two weeks ago.

As for those of you still flat the name but looking to get involved, I wouldn't step to the plate with a fistful of capital asking in the aftermath of such a sharp move higher. That's asking to get smacked in the teeth.

What you can do instead is write $52.50 puts expiring March 23. Those went for 63 cents Monday night.

Why would puts expiring in 10 days with a strike price seven bucks out of the money trade with such a premium? Simple, MU reports second-quarter earnings after the bell next Thursday (March 22). If you get run over by those, you'll still pay less than a net $52 for MU shares.

Chart Of The Day No. 2: Nvidia

Sticking with the semis, check out this chart of Nvidia (NVDA) : 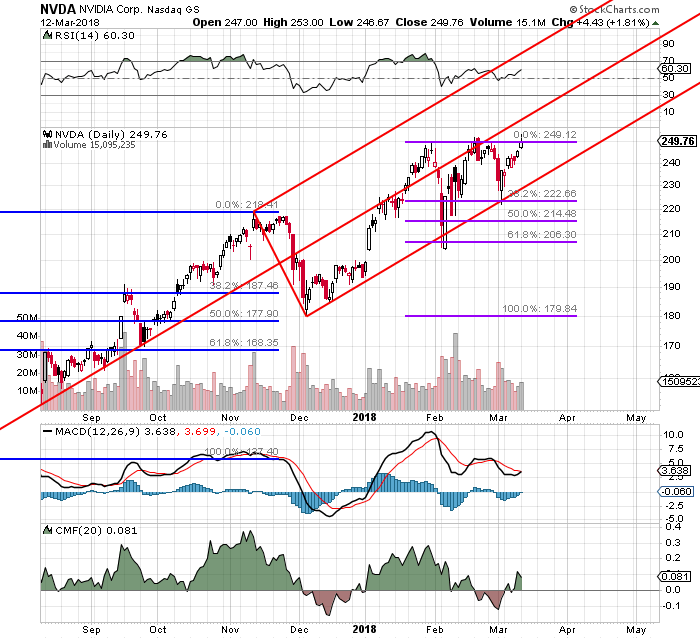 After meandering to the right for a few weeks, NVDA has developed a triple top while repeatedly finding support at higher lows. And do you know when I first drew the Pitchfork above for you? Jan. 8, when the formation was just about a month old.

Less than three months later, NVDA continues to obey this formation. And according to this model, NVDA's Monday closing price should be the stock's new support within a month should its sector remain strong and the market not fall out of bed.

These are my levels to watch Tuesday for where I think that the S&P 500 and the Russell 2000 might either pause or turn: