PulteGroup (PHM) broke out above its July 2016 highs, but a breakout over its early 2013 highs will be more important if it happens -- the charts and indicators suggest you need to be positioned for it instead of reacting to it. Keep reading.

In this daily bar chart of PHM, above, we can see the price action over the past 12 months. PHM rallied in June and July last year, but the gains did not hold and prices retreated back towards the lows of the past year around $18. Prices regrouped in November and December, and January saw a fresh resurgence to the upside.

In this weekly chart of PHM going back five years, above, we can see a four-year consolidation pattern as PHM has crossed above and below $20. The 40-week moving average line is bullish -- prices are above the rising average line. The weekly OBV line has been strengthening the past four months. The weekly MACD oscillator just crossed above the zero line for an outright go long signal. 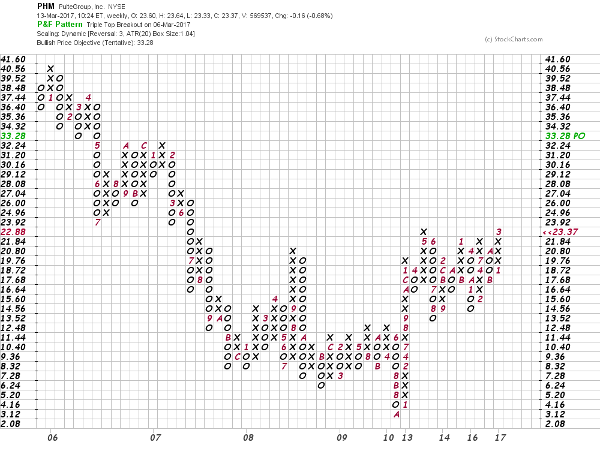 This Point and Figure chart of PHM shows the four-year consolidation in a different way. A trade at $23.92 will be a breakout and allow us to project an upside price target of $33.28.

Get an email alert each time I write an article for Real Money. Click the "+Follow" next to my byline to this article.
TAGS: Investing | U.S. Equity | Basic Materials | Industrials | Markets | Risk Management