Homebuilder Lennar (LEN) is extended on the upside after its breakout over its July highs earlier this month. Traders should use a shallow pullback to go long or increase longs as further gains appear possible in the weeks and months ahead.

In this daily chart of LEN, above, going back 12 months we can see a number of bullish clues that were lining up before the breakout earlier this month. The slope of the 50-day moving average line turned up in early December and the 50-day crossed above the now-rising 200-day moving average line in late February for a bullish golden cross. The On-Balance-Volume (OBV) line turned up in mid-February, signaling more aggressive buying as the volume of trading became heavier on days when LEN closed higher. The Moving Average Convergence Divergence (MACD) oscillator crossed above the zero line in late November and remains in a strong bullish configuration.

In this three-year weekly chart of LEN, above, we can see that LEN has broken out above its July highs and is in position to test/break its 2015 zenith. Prices are above the now-rising 40-week moving average line. The weekly OBV line has just started to strengthen, suggesting that increased buying interest in LEN finally has shown up in this indicator. The MACD oscillator on this time frame has moved above the zero line for an outright go-long signal after a cover-shorts buy signal in early December. 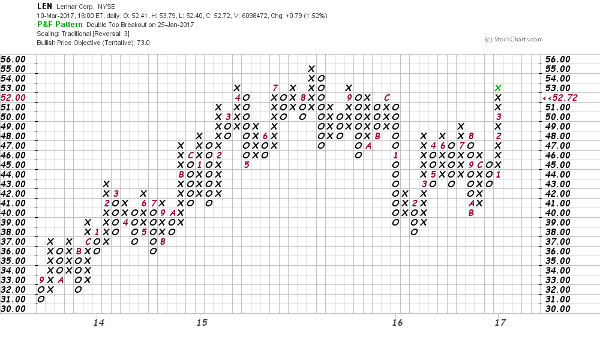 In this Point and Figure chart of LEN, above, we can plot price changes of $1 or more. The first entry in March (number 3) is at $50 for a breakout. The width of the consolidation pattern when counted and adjusted and then projected upward yields a price target of $73.

Not bad. Strategy: LEN has rallied about $9 in a few weeks so it is extended and could dip near term. Traders who are looking to get long or increase longs should buy a dip toward $51 and then risk below the breakout level of $49.

Get an email alert each time I write an article for Real Money. Click the "+Follow" next to my byline to this article.
TAGS: Investing | U.S. Equity | Basic Materials | How-to | Risk Management | Stocks