"The secret of all victory lies in the organization of the non-obvious." -- Oswald Spengler

How about the February U.S. jobs report on Friday? That showed massive job creation and increased labor-force participation, but inflation-producing wage growth? Not so much.

Former Fed chair Janet Yellen quipped late in her tenure that the modern-day U.S. employment picture was tough to understand. That's an understatement. The central bank tried to claim we were at full employment back when most sentient beings could see an army of potential workers just waiting to get off of the sidelines, but not counted in the headline jobless rate.

More recently, many market watchers became excited last month when January's year-over-year wage growth came in at 2.9%, a statistic that the Bureau of Labor Statistics has since revised down to 2.8%. But more than likely, that represented pay hikes and one-time bonuses inspired by recent U.S. tax reform and given to those at the corporate-compensation world's lowest end.

Still, it's well worth mentioning that U.S. labor-force participation rose to 63% in February from 62.7% a month earlier, without moving either the unemployment or underemployment rates. Yellen was right about the increasing demand level for labor. She and her colleagues simply thought we were further into that cycle than we really were.

These professional economists also failed to consider how e-commerce depresses consumer inflation, as well as how automation impacts job quality and wage growth. However, inflation will get one more at-bat prior to March 21's Federal Open Market Committee meeting on Tuesday, when the BLS releases the February Consumer Price Index.

Analysts expect overall consumer inflation to slow to a 2.1% annual from 2.2% in January. However, market watchers thing "core" CPI (which excludes volatile food and energy prices) will hold at January's 1.8% year-over-year rate.

The U.S. Treasury plans to go to market Monday afternoon with $21 billion of new 10-year bonds and $28 billion of three-year ones. Treasury will also try to sell $13 billion of 30-year paper on Tuesday.

This will be the first time that Uncle Sam tries to sell debt to domestic and foreign lenders since President Trump rolled out his new tariffs. Will we see negative impact on indirect bidding? I'm not smart enough to answer that question just yet, but I am smart enough to know that I need to watch for that.

Futures are pricing in an 89% chance of a March 21 Fed funds rate hike and a 35% chance of a fourth 2018 hike in December. However, keep in mind that the yield curve's long end won't move much higher without increased inflation expectations.

FOMC increases to short-term rates without the luxury of 2%+ consumer inflation will impact the yield curve the same way that pushing on a string would -- the curve will come close to inversion. Unless the Fed knows something that the rest of us haven't yet figured out, it might be wise to stretch out these rate hikes a tad.

Saudi Arabia's long-delayed initial public offering on 5% of Saudi Aramco, the world's largest oil company, might be delayed even longer. The Financial Times reported over the weekend that the Saudis have told British officials that any foreign flotation of the stock (which will list in Saudi Arabia and London, Hong Kong or New York) will likely happen 2019.

A final decision on where to co-list had been expected in 2017, but still has yet to come. It's said that the Saudis must make this decision by July for any chance of an IPO in 2018.

Perhaps the Saudis want one last world tour to see where the coziest situation exists. Or perhaps the slowdown has something to do with the widening split among oil producers about where to target crude prices and how best to avoid an expected onslaught of U.S. shale production.

The Saudis are known to favor $70 Brent crude, while their Iranian counterparts are said to prefer opening the spigots if necessary to keep oil from rising too far above $60 a barrel. That difference could impact U.S. shale production by as much as 600,000 barrels per day.

Selling Some APA and XOM and Buying Some HAL

The Energy Sector SPDR ETF (XLE) soared by 1.91% on Friday, beating the S&P 500 (which itself rallied 1.74%). I was hot on energy stocks coming into 2018, but the sector had been my Achilles heel over the year's first two months.

However, instead of just taking it on the schnoz, I tried to use Friday's strength to reorganize my portfolio's energy exposure. (In my opinion, smart traders use strength to make sales and weakness to wade into the abyss.)

I had been waiting for some energy strength to work its magic, or at least partially mend whatever I was doing wrong. Schlumberger (SLB) had easily been my best performer in the group, up 2% for the year and +12% since I bought.

That said, I cut my stake in Apache Corp. (APA) down to 60% of my original size back when $39 support broke. I also whittled down my APA basis a tad by writing covered calls, but that only helps so much when the premiums aren't really there.

I put the proceeds from my APA sales into ExxonMobil (XOM) as a dividend play, but both positions were still working against my fortunes. So, I decided to use Friday's energy-sector strength to dump another 20% of my original Apache position at a loss. I also cut nearly half of my XOM stake at a loss, put sold 30% of my SLB holding at a profit.

My intention now is to use my SLB proceeds to add to my currently small long of Halliburton (HAL) the next time the sector (or at least HAL) takes a dive. Why expose myself to both SLB and HAL? Simple: I like oil-services stocks here.

It looks to me like production is poised to pop no matter where it comes from and whether or not the Organization of Petroleum Exporting Countries blinks. It also seems to me that demand will be there, even more so than it is now.

Do I love HAL? Not really. The name brings a lower multiple than SLB, perhaps because Halliburton has a much-higher current ratio. HAL's debt-to-equity ratio is nearly three times Schlumberger's, while the firm's book value per share is little more than one-third of SLB's.

Still, Halliburton's generous exposure to the U.S. oil-services business just might be where I want a slice of the pie. (Yes, SLB offers some domestic exposure as well, but it's only about 27% of the firm's overall coverage.)

So, my thought in the space is that I need both. Am I a genius? No, just a kid who thinks a lot about this stuff.

Chart Of The Day: Halliburton

Some of you might remember that I charted Halliburton a few weeks back.

I'm leaving the orange Pitchfork from that chart in place in this update so as to illustrate how that pattern has since broken down: 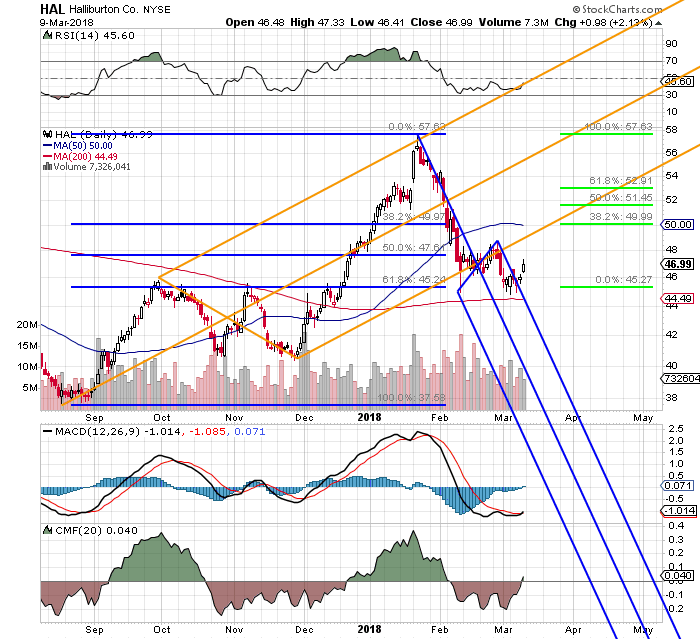 I've also thrown in another Pitchfork pattern in blue, which covers the stock's current downtrend. I wanted to show you just how unsustainable that trend is (in my opinion).

What has worked like a charm has been support around $45.25, which also happens to be a 61.8% retracement of Halliburton's September-to-January move. That level has worked twice now, and HAL closed on Friday at $46.99.

We can also see that HAL's Relative Strength Index (marked "RSI" at the top above) and Chaikin Money Flow (denoted with a "CMF" at the bottom) are starting to work. The daily Moving Average Convergence Divergence indicator ("MACD") is emitting a positive signal as well. However, with two of the three exponential moving averages (EMAs) sporting minus signs, I'll take all of the above with a grain of salt.

Still, let's go back to the Fibs, because they're working. If we run the model from Halliburton's January highs through its double-bottom lows, then we'll see a primary target retracement (31.8%) at roughly $50. But if the pattern actually works in reverse, we could be looking at prices in the $52.90 range.

That's all well and good, but first we have to figure out where to increase our exposure. Did we miss that $45.25 level? If we did, the stock's 200-day simple moving average (the red line above) is still running at $44.50. So even on a breakdown, I'm likely to pick up tranches at those prices.

While I bide my time waiting for that opportunity, $45 puts expiring on April 20 were still paying 84 cents as of Friday night. That at least puts my entry point closer to 44 bucks if I get run over. If not, I keep the 84 clams.

These are my levels to watch on Monday for where I think that the S&P 500, and the Russell 2000 might either pause or turn:

Get an email alert each time I write an article for Real Money. Click the "+Follow" next to my byline to this article.
TAGS: Investing | U.S. Equity | Treasury Bonds | Rates and Bonds | Markets | Stocks

Here's Why Bonds Are Pausing, and Why Yields May Resume Their Rise

The possibility of lasting inflation is very real, and that possibility likely will result in bond yields continuing to rise.

The marketplace responded well to the first week of earnings season, or should we say what we saw beyond the banks that dominated.