Broadcom Ltd. (AVGO) was last reviewed as we were still recovering from our New Year celebrations and I wrote that, "A decline to $253.21 or lower is needed to really weaken this chart."

Let's see how the charts and indicators look this morning.

In this daily bar chart of AVGO, below, we can see enough bullish technical signs that give us confidence in moving back to the bullish camp. Prices made a low in early February and a higher low in early March. A high was made in late February and it looks like a higher high can be set today giving us the simple definition of an uptrend.

The quicker-to-react 50-day moving average could turn positive in the new few days as today's strength figures into the equation. The daily On-Balance-Volume (OBV) line looks like it is going to make a double bottom with lows in February and March. The Moving Average Convergence Divergence (MACD) oscillator gave a cover shorts buy signal in early February and could soon cross above the zero line for an outright go long signal.

In this weekly bar chart of AVGO, below, we can see a long rise from a base in the $120 area in 2015. The rising 40-week moving average line defined the advance for about two years. Prices broke below the 40-week line in January of this year but are now poised to close back above this longer-term trend indicator.

The weekly OBV line has been neutral the past three months but could resume its rise in the next few weeks. The weekly MACD oscillator has been in a bearish mode since May of last year but the two moving averages that make up this indicator look like they have begun to narrow and could eventually cross to the upside.

In this Point and Figure chart of AVGO, below, we can see that a trade up at $258.30 would be a short-term breakout and could open the way for a longer-term rally to a possible $314.58 price target. 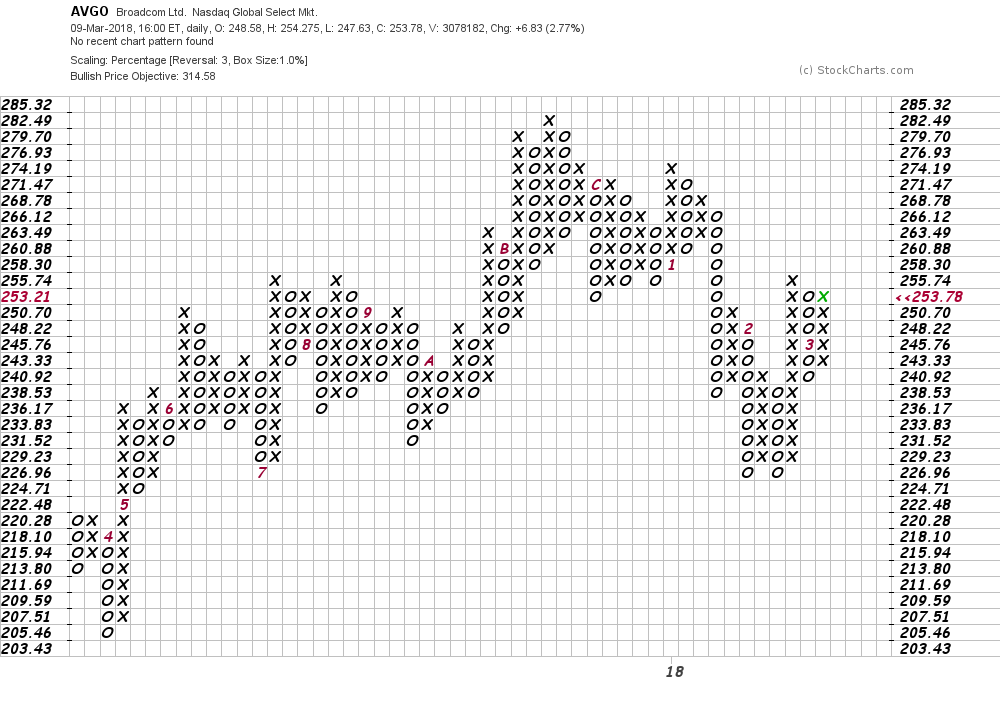 Bottom line: If you can handle headline news that could move AVGO sharply on any given day, I would approach AVGO from the long side again. Aggressive traders could go long AVGO near $260 and look to add on strength above $270. Risk a close below $242.