" Momentum? Momentum is the next day's starting pitcher."

Nine years is a long time if you happen to be a teenager. Not so much if you happen to be a slightly past middle aged former NYSE floor trader who clearly remembers the sickening feeling of a world seemingly on the verge of utter and complete financial ruin. There have been several times in my professional life where that feeling in my gut just works it's way into everything I do. This inner, guttural feeling is almost impossible to describe to anyone who does almost anything else for a living.

The first time I ever experienced this, would be on October 16th, 1987. That was the Friday prior to the market crash that would ensue on Black Monday. I think every single one of us knew that equity markets would crash on that Monday, and I can still remember reading Barron's that weekend thinking that I was wasting my time because no matter how well I prepared, I would still be walking into a buzz-saw when that bell rang on Monday morning. Two years later, we would experience something of a mini-crash. By 1998. Long Term Capital Management would bring back that nauseous feeling, as would both the "flash crash" of 2010, and the Chinese sudden devaluation of the yuan in August 2015. March 9, 2009 was different. That decline brought with it, it's own special kind of awfulness. Nothing comes close to 9/11, but that is a different story altogether.

The low of March 2009 did not bring with it the sudden despair that some of these other events had wrought. Equity markets had been in decline since October of 2007, and few of us (at least I didn't) realize just how much of a jam we were actually in for quite some time after that. The New York Stock Exchange had initiated it's switch-over from an open outcry model to a much more electronic "hybrid" version in December 2006. That had stolen some of our focus on the trading floor. Some of my colleagues will remember the saying, "Have Your Bags Ready in December". You can see every day, that while the change over from open outcry to an electronic model did cause a steep decline in downtown NYC employment levels, that there are still humans interacting at the point of sale in 2018.

The point there is that the S&P 500 had largely gone sideways in 2007, and did not start seeing truly gigantic monthly losses until well into 2008. By the time 2009 rolled around, folks in the broader economy were talking about a "Depression". On the trading floor, we witnessed a 57% decline in the S&P 500 over a year and a half. "Slow motion" anguish for the many. I have been around more famous people than I can possibly remember, given the nature of my work, and the location of where I spent most of my career. I have met presidents, celebrities from all walks of fame, you name it. Only a few actually stand out. I remember Secretary of the Treasury Henry Paulsen's steely eyes. This was around the time that President Bush had signed the TARP legislation in 2008. I was taken aback. This was clearly a man with a lot on his mind, who had not a lot of time. He was in no mood for small talk, or perhaps more specifically... he seemed not to notice the people around him. It was then, that I knew that bad was going to get real bad.

Today is Friday morning. There will be sun. If the current bull market can stay afloat until the third week of August, this will become the longest running of the bull in the modern era. The bull's longest stretch of the legs until then will remain the run of Oct 1990 through March 2000. That's pre-internet for most folks. Incredible. Those of us, that either decided not to throw it all away nine years ago have seen that decision richly rewarded. We have all learned lessons though.

We have learned, I hope to be ever more agile than we had been prior. We have learned to be far more disciplined in our approach to hedging our positions. We have all learned the value of diversification,and to avoid gimmicky financial products (Well, not all of us). Most of all, we have all learned that, no..... it doesn't come easy. Only one's work ethic, and a realistic understanding that health and family are everything. Until you lose something from that perspective, you have lost nothing at all.

Equity markets rallied fairly hard into day's end as some clarity was allowed to shine upon the president's announced tariffs on Steel and Aluminum. Not all nations are equal. The president would like to take a flexible approach, announcing that perhaps the US will raise or lower these tariffs on a country by country basis. This will allow these tariffs to become perhaps a manageable obstacle to the economy, and might even create a meritocracy of sorts, where trading partners might earn their way toward US consumers by treating US exporters fairly.

The S&P 500 closed almost precisely upon it's 50 day simple moving average. While that's significant, perhaps even more so, was the enlarged trading volume experienced during the late day rally that even the industrials (as importers of steel & aluminum) participated in.

It would appear that markets really did not fear these proposed tariffs at all, unless there was something also positively impacting the markets that most of us did not see coming. Later Thursday evening, President Trump accepted an invitation relayed to him through the South Koreans to meet with North Korean leader Kim Jong Un. The time and place have yet to be finalized, but this is perhaps the single greatest breakthrough in the name of peace made by the United States in many decades. You want to know if peace has a chance. Watch the defense names. Lockheed Martin (LMT) , Raytheon (RTN) , General Dynamics (GD) , and Northrup Grumman (NOC) all under-performed the broader markets yesterday, and three of those four actually closed in the red.

Jobs Day. What's good for the workers might not always be what's good for the marketplace. Non-Farm Payrolls would have to be just awful to matter this morning. I am looking for something a smidge above 200K, but I believe that number would have to print below 100K to actually matter. Today is about wages. Average hourly wages hit the tape at a growth rate of 2.9% year over year in January. This was seen as somewhat inflationary at the time despite the fact that the number was supported by fewer hours worked that led to lower weekly pay for the average laborer across the nation.

The fact remains that, off the top of my head, Walmart (WMT) , Target (TGT) , CVS Health (CVS) , Kroger (KR) , Dollar Tree (DLTR) , and Ross Stores (ROST) , have all either raised pay, or announced planned pay increases for their lowest paid employees. Janet Yellen, while still at her post, had indicated that she could not understand why the Phillips Curve was not working in real life the way it does in the text books. Well, with expectations for Unemployment approaching 4%, and all of these employees seeing either pay increases or one time bonuses (why the y/y number popped), then the time is now to see that curve do it's thing.

A hot report today, will likely push the yield for the US ten year Treasury Note toward 3%, based on rising expectations for a fourth 2018 rate hike this December. Currently, as priced in by futures markets in Chicago, the probability of that fourth rate increase stands at about 32%. Game on.

Chart Of The Day: Raging Bull 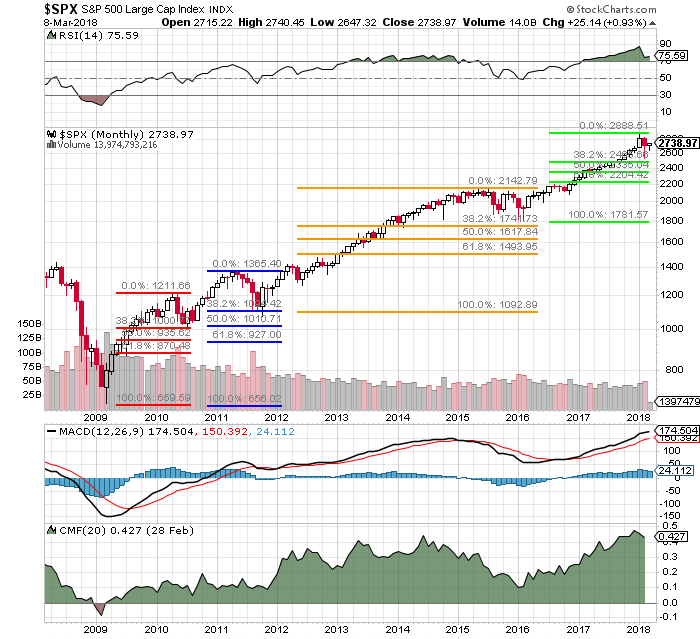 I don't really like charting anything over a decade. Some analysts might like such things. I find that this does nothing that lends itself toward making money right now. That said, let's take a gander at a monthly ten year chart of the S&P 500, and see just what there is to see. Hmm.

Wow!! How interesting is this snapshot of the marketplace? Look at the Chaikin Money Flow!! Nine years of nothing but green. Relative Strength? Technically overbought since early 2017. Uh oh. How about the bullish crossover we see for that monthly MACD? That cross-over came in 2016!!.... It's still in place. Holy Toledo.

There is one other item that I want you to see before you go. I have laid out for every (what I consider to be) significant correction over these last nine years a Fibonacci model (Red, blue, orange, and green for the one experienced over the past month or so.) In each and every case, support showed up either precisely at, or darned close to a 38.2% re-tracement of the move from the prior correction's low to the pre-correction high. Now, that's interesting, and you can bet a slew of algorithm writers have already seen this.

Get an email alert each time I write an article for Real Money. Click the "+Follow" next to my byline to this article.
TAGS: Investing | U.S. Equity | Economic Data | Economy | Jobs | Markets | Politics | Stocks

I'm Looking for This Bounce Action to Continue Higher

Market participants are betting that the worst has already been discounted.