Might it be time to dial up a telecom name for your portfolio? Well, that depends on your phone and on what matters most to you with a mobile carrier. Do you want the largest customer base? Do you prefer the strongest current network? Would you rather be linked to the company in the lead in the race to 5G? Perhaps you prefer the name with the best storefront growth potential that has been the customer acquisitions leader over the past four years?

Here's the dilemma if you have to pick one: If you only want to add one telecom name, each question above has a different answer. AT&T (T) . Verizon (VZ) . Sprint (S) . T-Mobile (TMUS) . In that order.

I'm not considering AT&T here as being bigger doesn't mean being the best. We're squarely into value territory with T shares. If anything, I might consider the Vrio spinoff, but that's all at the moment.

So, let's take a quick look at the other three.

Sprint may offer the best reward in terms of upside, but the probability is it will be dead money for some time. The shares were smashed after a potential merger with T-Mobile failed. Now, the company's hope lies in the transition to 5G. Sprint is rolling out 5G in five major cities, which will offer 10x the data speed of LTE. Yes, they've signed deals with Altus and Cox to try and fill some of the space left empty from the T-Mobile deal, but neither Cox nor Altus will offer Sprint exposure to IoT (Internet of Things), which it sorely lacks.

Softbank (SFTBY) provides a floor here in terms of price. They currently hold 85% of Sprint; however, talk of spinning mobile holdings into an IPO could push Sprint away from Softbank's deep pockets. The recent note offering from Sprint hints the company will have to do the heavy lifting of its huge debt load on its own. The company was forced to offer 7.625% maturing in 2026 to get financing. These are ugly numbers in a low-rate environment.

What Sprint does have is a leg up in the 5G race. Working with Qualcomm (QCOM) to get a Snapdragon-powered 5G phone into consumer's hands before AT&T or Verizon is key. Qualcomm already offers the Snapdragon x50 5G-supported modem. This is Sprint's best chance at becoming relevant again. Get the jumpstart on 5G.

There is one other area worth noting and that is inflight WiFi. Sprint is getting involved with Delta Air Lines  (DAL) and two satellite companies to challenge GoGo. 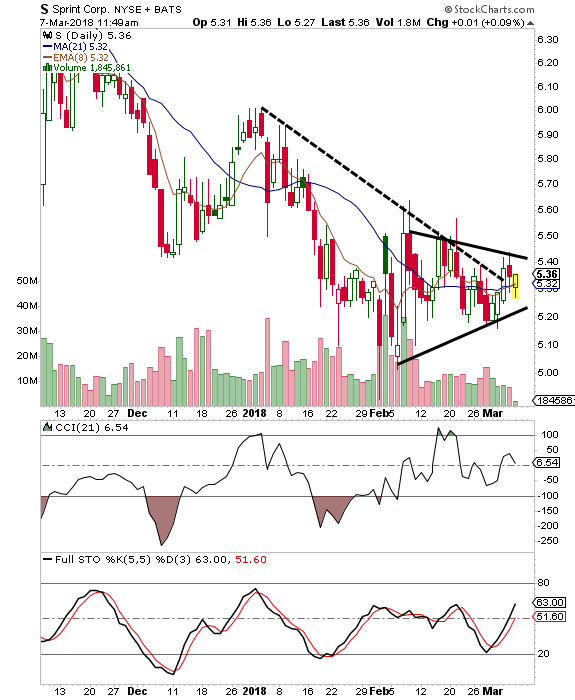 In terms of the current technical picture, until we see a close above $5.50, Sprint is doing nothing more than consolidating the recent drop. A close below $5.20 puts the stock on the path of $5.00. The overall outlook is neutral.

Verizon is the behemoth in this bunch, sporting a $200 billion market cap, almost three times the combined market caps of Sprint and T-Mobile. It is also the lone dividend payer in the group. For income-oriented folks, Verizon's 4.8% yield will be attractive. The low-teens P/E ratio might draw in some value seekers as well.

The company isn't completely without growth. In the fourth quarter, Verizon managed to claw back into the subscriber growth fight, picking up 1.2 million new net wireless customers.

Meanwhile, Verizon improved its position in the race for 5G by closing the acquisition of Straight Path and its airwave licenses. This should be a huge boost, but I still view them slightly behind Sprint.

Where Verizon holds appeal is diversity. The media business saw 10% growth powered by OATH, a combination of Yahoo and AOL assets. Content still has value and Verizon has methods for focused delivery. Additionally, revenue from IoT (Internet of Things) grew by 17%. 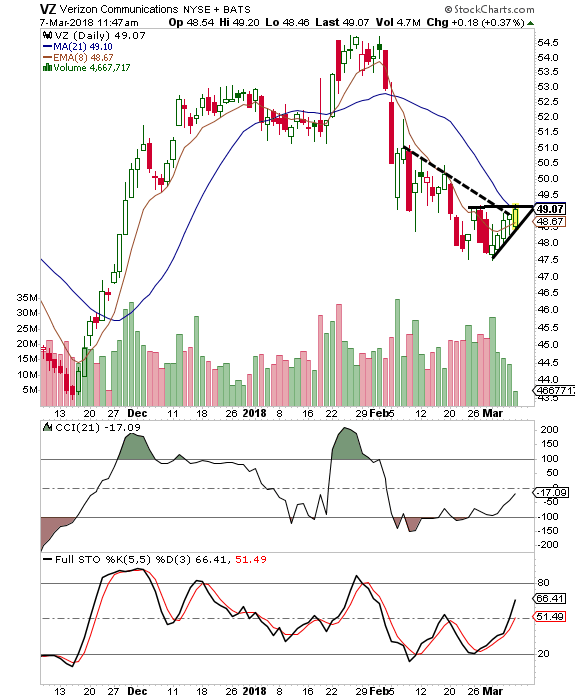 From a technical standpoint, Verizon gets interesting over $49.50 to the upside. After the big drop in early February, it may be ready to reverse higher. I'd say it's within a quarter of a buy, but any close under $47.50 puts this into the don't own category.

T-Mobile is the innovative marketer in the group, snagging huge customer growth by offering unlimited data plans. Unfortunately, that growth has slowed as both AT&T and Verizon are making similar offers. Rather than lowering prices, T-Mobile is looking to add benefits to its plan. We'll have to wait a few quarters to see how that plays out.

After the failed merger with Sprint, T-Mobile announced a $1.5 billion buyback plan for 2018. This could wind up with an effective amount closer to $2 billion, as 60% TMUS holder, Deutsche Telecom (DTEGY) , wants increase its stake in T-Mobile. It's also possible T-Mobile will implement its own dividend, which could result in some investors rolling out of AT&T or Verizon and into TMUS shares.

T-Mobile is often thought of as the company with the weakest network. That's a huge negative on the move to 5G. Realizing this weakness, the company signed a deal with Nokia (NOK) and Ericsson (ERIC) to help build out its 5G network. Still, I believe T-Mobile will be at least six months behind the other big three in the move to 5G. 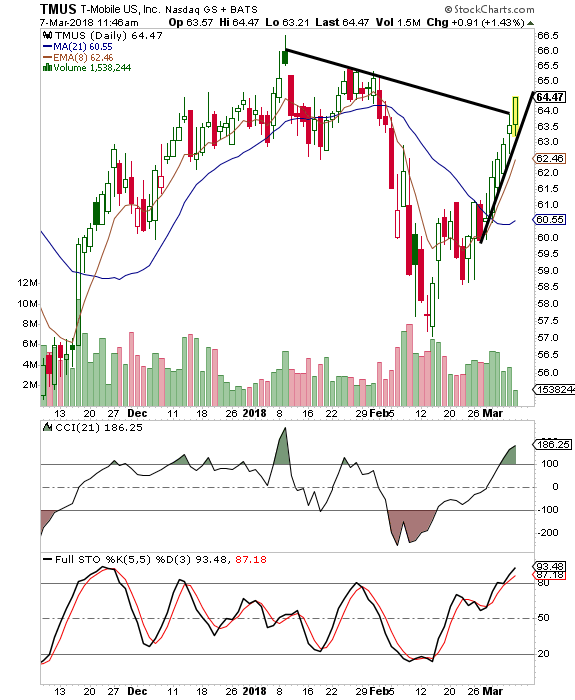 Technically, TMUS is the strongest of the group. Some consolidation here without moving below $62 would be preferred as the stock has bounced a bit too far, too fast. Ideally, the shares would trade between $62 and $65 for a few weeks before pushing higher. The close above $65 would be the buy at that time. I see support at $61.

I don't see a clear winner here. None of them show a significant advantage over the others outside a specific category. If I absolutely had to pick one, I would lean toward Verizon, but I wouldn't call it a compelling choice.

Get an email alert each time I write an article for Real Money. Click the "+Follow" next to my byline to this article.
TAGS: Investing | U.S. Equity | Telecom Services | Dividends | How-to | Stocks | Stocks Under $10

Updating Qualcomm's Break to the Downside

How do the charts look now?

Verizon Pops on Buffett Buying but Is the Strength Sustainable?

I am open to a purchase of VZ but the charts have to show me a lot of improvement.

Shares of Nokia Return to Earth

Do the research and enter trades that make sense.