" I want to be strong, dominant. Like Wilt Chamberlain."

Earle Combs batted leadoff. Combs, a baseball Hall of Famer, in his own right, batted .356 in 1927 with an on-base percentage of .414. The batting average left him tied with Babe Ruth for second place on the team, and the on base percentage finished Combs in a very distant third.

The New York Yankees lineup, not just of the fabled 1927 season, but of the era in general was known as the "Murderers' Row." They all hit for average, and with Ruth, Lou Gehrig, and Tony Lazzeri, there was no shortage of power either. A few of them were surprisingly quick on the base-paths as well.

There is another dynastic lineup of prolific performers so obvious as to make any athletic juggernaut pale in comparison. The success of this other Murderers' Row is driven by long-term demand. Consumer demand. Corporate demand.

Demand from every corner has turned what was once seen as "boom and bust" cyclical business into a relentless force of nature that simply awes this market watcher as he cheers his favorites from the cheap seats the way any real sports fan might.

Wednesday, as the financial world grappled with the resignation of White House senior economic adviser Gary Cohn, it was the Technology sector that led markets to the upside as cool heads ultimately prevailed after a morning fraught with some controlled panic.

You can check whatever kind of sector tracker you follow. Throw any timeline you want onto the model. Five days? One month? Three months? One, three, five, or 10 years... it's always the same. Information Technology ends up on top of the model. Consistency unparalleled.

And at the heart of the sector and at the economy's needs lies demand for the abilities provided by the semiconductor industry. Nothing happens without these guys. Nothing.

The Greatest of Them All

The Rolling Stones? Close, but no. We have all heard the concerns over Apple's (AAPL) "lousy" quarter, the underperformance of the "super-cycle." The waning consumer interest in constantly upgrading their smart phones to the next generation. Does that concern me? Hmm. Just a little.

It would be nice (as a shareholder) if every moron on the block wanted to run out and buy a thousand-dollar phone. For Action Alerts PLUS holding Apple, this really might just be one more baited hook. As long as the firm is still able to drive customers into the firm's eco-system -- that's what this firm will eventually be all about.

Think Beats, think Air-buds, think their home device, the Apple Watch, and of course iPhones. Can I stay long an Apple that continually flirts with my $176 price target, still has a ton of cash earmarked for a journey back to the U.S., obviously has an intelligent, engaged CEO, and has that barbed hook into each and every one of their customers?

Think at 13 times forward looking earnings, this firm can grow it's multiple? I think it's more than a fair shot that Apple experiences multiple expansion rather than contraction.

Risk / reward, in my opinion, favors the bold in this space. If I'm wrong, I'll live. At least the reasoning is sentient. If you fear the capital layout, 160 puts expiring April 20 still pay about $1.18. That's earnings (May 3) unencumbered, so there is less hair on the trade.

Micron Technology (MU) is expected to report their Q2 earnings upon the close of business on March 22. That's still two weeks out. Expectations are for earnings per share of a whopping $2.69 on revenue of roughly $6.8 billion. If that's the way this plays out, gang, that will be year-ove- year revenue growth of 46%.. give or take. Demand. DRAM. Demand NAND.

Speaking of NAND, you did see the deal that Intel INTC made with Chinese concern Tsinghua Unigroup last week, right? This on top of multiple price target increases.

For those who wondered but were afraid to ask:

The catch? DRAM is 100 times faster than NAND flash. DRAM also lasts 1,000 times longer. NAND flash wears out fairly quickly with heavy usage. DRAM does not. DRAM ends up being cheaper in dollars per gigabyte.

Look, even if cell-phone sales tail off a little bit, as seems to be possibly happening, you have seen the growing needs for artificial intelligence, machine learning, autonomous vehicles, the data center (that's "the cloud,, sports-fans), blockchain mining, and gaming. Still think there is going to be a boom/bust cycle? In all honesty, there might be, but the busts will shrink, in my opinion, and the booms should expand. All of the business lines just mentioned require far more chips than any reduction in demand from the cell-phone space.

Take a gander at the wafer club, those that service and provide for the industry. Lam Research (LRCX) . Applied Materials (AMAT) , and KLA-Tencor (KLAC) . All three of these firms have a few things in common.

All three beat expectations for earnings as well as for revenue. All three trade at 12 or 13 times forward-looking earnings. All three have either raised their dividend or announced plans to do so.

So far, even with some hiccups, KLA-Tencor is up 11.8% year to date, outperforming the Nasdaq Composite as well as the broader marketplace. What KLAC is not doing, is outperforming AMAT (+16.2% YTD) or LRCX (+15% YTD). Guess what? I'm fine with that.

In fact, of all of my broader technology based holdings, only Action Alerts PLUS holdings Nvidia (NVDA) and Microsoft (MSFT) , as well as Salesforce (CRM) give me any valuation-based concerns at all, and they all have a story in place warranting a higher valuation.

I can only guess how much money I might have made last year by simply holding NVDA instead of trying to trade that name. Three times I sold NVDA last year when the last sale hit a price target. Three times I paid up to buy it back, and still made money on that tranche.

Microsoft has the whole Azure/Cloud story in place, not to mention to support of all of the firm's legacy businesses.

Salesforce? I don't know. What can you say about 26% subscription growth, and a 49% increase in operating cash flow. I know what I say. I say well done, young man (Marc Benioff).

Chart (Macro) of the Day: KLA-Tencor 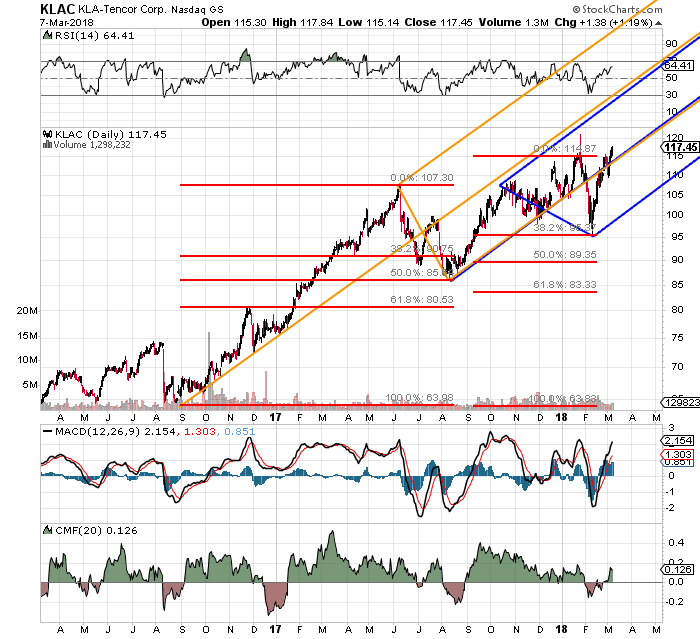 I thought it might be time to revisit the chart that I threw at you regarding this name on Jan. 1, when I publicly made it my top pick for 2018. As you can see, after KLA-Tencor (KLAC) wobbled a bit over the early part of the year, Relative Strength has been on the rise, but remains nowhere near overbought. The daily MACD (moving average convergence divergence) presents as a short-term vision of beauty. Money Flow had appeared troublesome during the February woes, but looks to have recovered quickly.

The orange Pitchfork is representative of some of my earlier work in the name. You can clearly see that the "Flash Correction" broke my model to the downside. I have added a new Pitchfork (blue) that intertwines that market aberration (hopefully) into the work I had already done. Now isn't that telling? Or maybe it's my open bias, because I own the shares, and have publicly been behind the stock, but you do see that, don't you? FYI: I am capable of such bias. My ego does not mind the extra set of eyeballs.

It appears to me, that all the sharp winter selloff did was add a basement to the model. In other words, my Pitchfork has become a Trident. The shares have made an obvious effort to regain the original setup.

The only negative I see here is that the trend has been altered slightly (still higher), but may hit rising resistance at nearly the same levels that it would have prior to the melt-down.

Now, if we can only keep those VIX-related ETPs at bay. Equity markets made great strides in that area yesterday.

Get an email alert each time I write an article for Real Money. Click the "+Follow" next to my byline to this article.
TAGS: Investing | U.S. Equity | Technology | Economic Data | Earnings | Economy | How-to | Markets | Newsletter | Options | Politics | Stocks