Expeditors International of Washington (EXPD) is poised to move higher in the weeks and months ahead based on our latest read of the charts and indicators.

In this daily chart of EXPD, below, we can see a small base pattern in March through July before prices broke out on the upside. Early in the base, we can see a bullish golden cross as the 50-day moving average crossed above the 200-day moving average. Prices declined below the 50-day average line in September, October, November and January, but this weakness did not last long enough to turn the slope of the 50-day average negative.

The On-Balance-Volume (OBV) line generally moves higher the past twelve months, suggesting that accumulation has been underway for a long period of time. The Moving Average Convergence Divergence (MACD) oscillator has been above the zero line for much of the past year, but in the short run the averages that make up the indicator have crossed to a liquidate-longs signal.

In this three-year weekly chart of EXPD, above, we can see that prices are above the rising 40-week moving average line. The weekly OBV line in the middle panel below the price chart shows a positive trend since January 2016. The MACD oscillator turned above the zero line in March/April and remains in a bullish mode still. 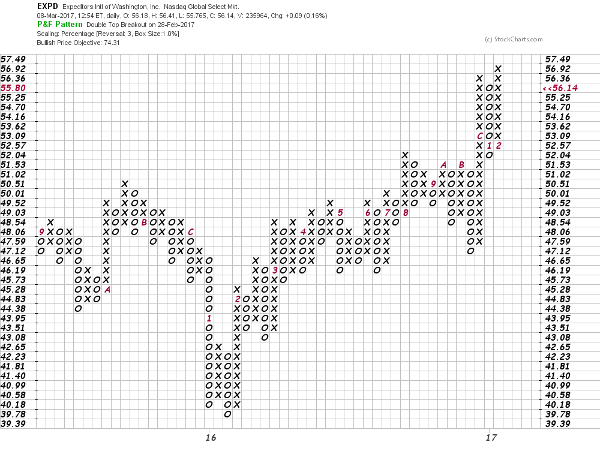 In this Point and Figure chart of EXPD, using percentage swings instead of set dollar swings, above, we can see a good-sized base pattern and a breakout at $52.57. Prices made a sharp pullback, and then in February rallied to a new high. Prices could dip a little more in the short run, but aggressive traders looking to get long EXPD or add to longs in EXPD should buy a close above $57.50. This chart shows a possible longer-term price target of around $74.