Trends can and do persist for long periods of time.

Weatherford International  (WFT) has been in a downtrend since the middle of 2014 but it looks like the trend is finished and a recovery phase could be under way.

In this one-year daily chart of WFT, above, we see part of the long downtrend. Prices were holding the $5 level from May until late October when they broke to a new low. From the early November low, WFT recovered quickly with buyers coming in at higher and higher lows -- $4 and then $4.75 and then $5 and $5.50. Prices are back above the 50-day and 200-day moving averages with a recent gap to the upside. Because of WFT's long-term downtrend, it would not surprise me that Tuesday's upside gap gets filled. A bullish gold cross of the 50-day and 200-day moving average lines looks like it is happening. The On-Balance-Volume (OBV) line turned up with prices in early November and tells us that buyers are getting more aggressive. The Moving Average Convergence Divergence (MACD) oscillator is above the zero line in a bullish configuration.

In this three-year weekly chart of WFT, above, we can see a long, drawn-out decline, but prices have finally closed above the flat 40-week moving average line. A positive slope to the 40-week average line will be another bullish signal when it happens. The weekly OBV line started to improve at the beginning of 2016 and more aggressively since late October. The MACD oscillator is almost above the zero line for an outright go-long signal. 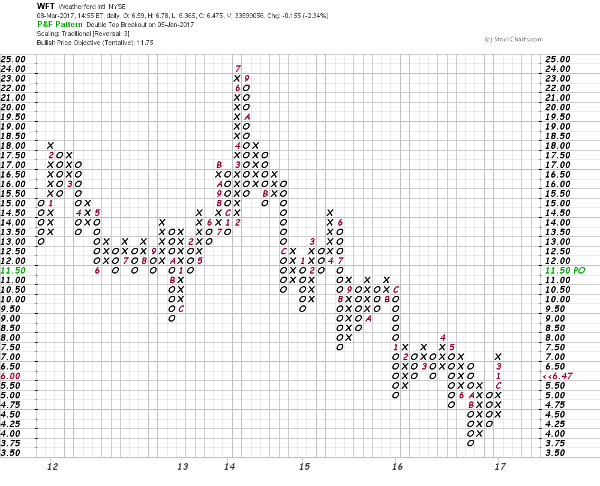 This Point and Figure chart of WFT, above, shows the breaking of the downtrend, too. I would expect further sideways price action in the near term, but an upside price target of $11.50 is also shown.

Bottom line: The break of the long-term downtrend of WFT has my attention. I don't expect prices to run away on the upside, so you have plenty of time to research the fundamentals and slowly probe the long side if you want. A close back below $5 would suggest a much longer basing process.

All Eyes Are on the OPEC+ Meeting Thursday - What Can it Mean for Oil?

OPEC and its members have a bit of a dilemma as each country has its own government spending and deficit considerations.

Preparing to Whittle Down My Annual Portfolio of Rebound Candidates

The 2021 Tax Loss Selling Recovery Portfolio still has plenty of potential members, but it will be cut to 12 soon enough.