Urban Outfitters Inc. (URBN) made new price highs for the move up last month. This month looks like a different story as volume and momentum seem to be diverging from the price action.

In this daily bar chart of URBN, below, we can see that prices bottomed in June-August of last year and then rallied strongly to double over the next five months. Prices were down in after-hours trading Tuesday evening and could be weak on Wednesday. URBN could test and maybe break the rising 50-day moving average line. The $32 level is key on this chart as it represents nearby chart support. A close below $32, should it happen, would likely start a deeper pullback.

Notice the volume pattern since August, above? Prices doubled but I do not see an increase in volume. The daily On-Balance-Volume (OBV) line does a better job of seeing the volume pattern. The OBV line rises from June to late December and tells us that buyers of URBN have been more aggressive. From late December to now the OBV line has not confirmed the price action. Prices have moved higher into late February but the line has been flat to lower.

In the bottom panel, above, is the 12-day momentum study which shows weakening momentum since late November. This is a bearish divergence when compared to the price action. The rally in URBN has been slowing for the past three months and could have been foreshadowing Wednesday's anticipated price weakness.

In this weekly candlestick chart of URBN, below, we can see that prices are above the rising 40-week moving average line. If you look closely at last week's candle you may see an "upper shadow" as prices approached $38. You can see a more dramatic upper shadow in late 2016. These upper shadows tell us that the price level or area was rejected by sellers.

Looking at the volume pattern right below the price action it seems as if it has been diminishing during the rally. The weekly OBV line does show a rise the past few months but it seems to be less than one might expect for a doubling of price. The weekly Moving Average Convergence Divergence (MACD) oscillator has narrowed and could cross to the downside for a take profits sell signal. 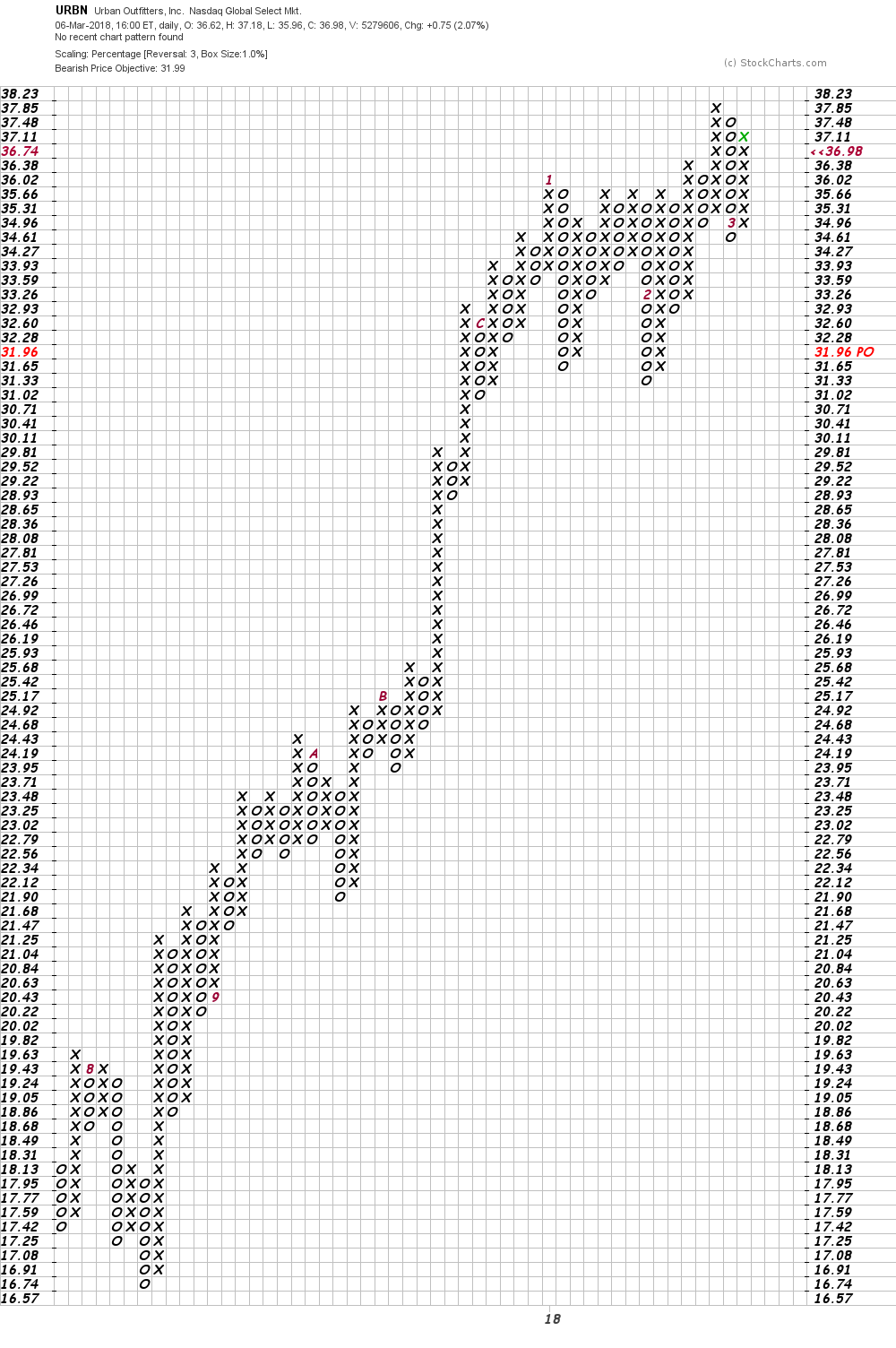 Bottom line: URBN could be under pressure Wednesday. Our indicators have been giving us some warnings in recent weeks so it could mean that the support around $32 is tested and maybe broken. A close below $32 could mean a decline to around $26.

Get an email alert each time I write an article for Real Money. Click the "+Follow" next to my byline to this article.
TAGS: Investing | U.S. Equity | Consumer Discretionary | Futures | How-to | Markets | Stocks