I haven't visited the charts of Ross Stores Inc. (ROST) since last July and a lot has changed on the charts. Back in July ROST was searching for a bottom, which came the following month. Today is another story. Let's check the updated charts and indicators.

In this daily bar chart of ROST, below, we can see the price ahead through Tuesday. Prices are indicated to open sharply lower this Wednesday and we'll need to keep that in mind. In the past three weeks or so ROST has been struggling under the cresting 50-day simple moving average line. The 200-day line is comfortably below the market and rising.

The daily On-Balance-Volume (OBV) line bottomed in July and was strong until late January signaling stronger or more aggressive buying. Since the end of January the OBV line has been neutral, suggesting that buyers of ROST did not use the February correction to increase longs.

In the lower panel of this daily chart is the 12-day price momentum study. Momentum slowed (lower peaks) from early December to late January while prices made higher highs -- a bearish divergence. So far in February and March we do not have a bullish divergence to tells us the pullback is ending.

In this weekly bar chart of ROST, below, we can see that prices are still above the rising 40-week moving average line. Major chart support is likely to be found around the $70 area -- or where prices encountered resistance on the way up in late 2016 and early 2017. The weekly OBV line has declined the past two months, suggesting more aggressive selling on this time frame. The weekly Moving Average Convergence Divergence (MACD) oscillator has crossed to a take profits sell signal and is still weakening.

In this Point and Figure chart of ROST, below, we can see three attempts to break to the upside at $80.63 and a downside price target of $73. A trade at $73.73 will be a new low for the move down on this chart and is likely to open the way for further losses. 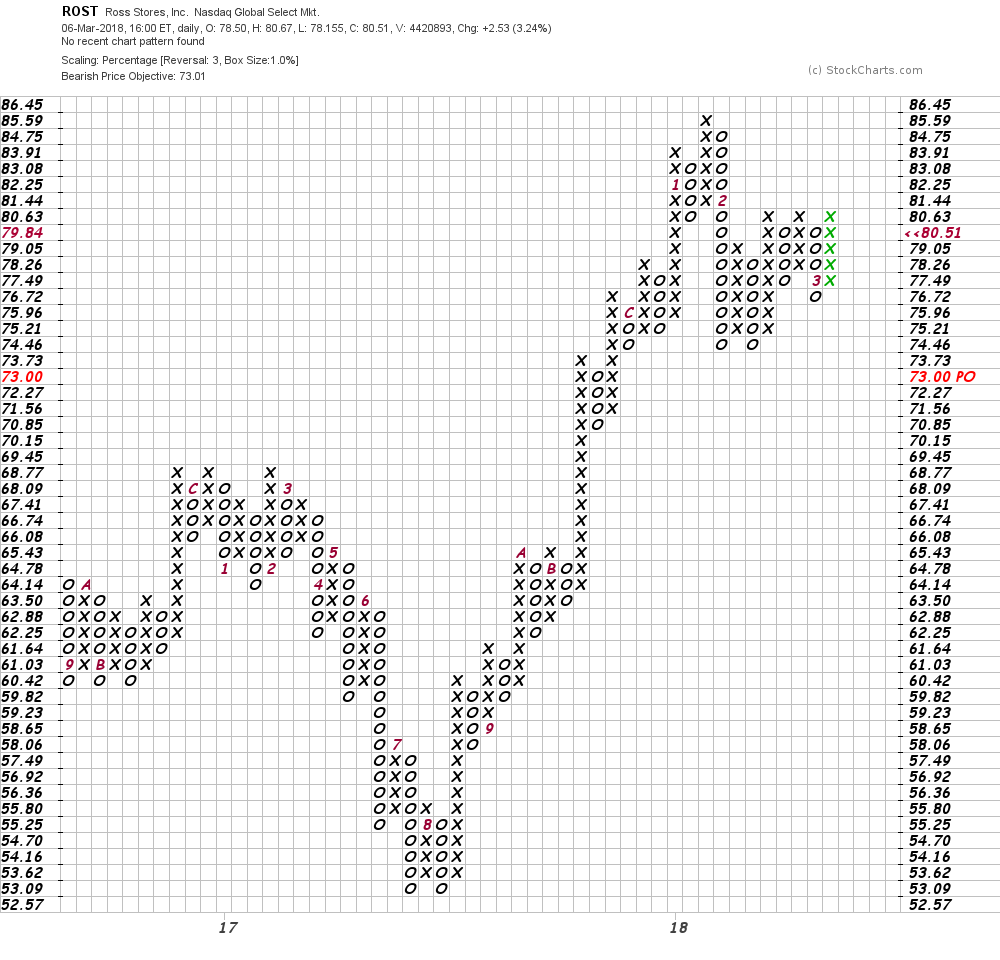 Bottom line: The broad market and ROST look likely to be weak today. The short-term levels to watch on ROST are $76 and $74. The breaking of these levels could precipitate further price weakness to the $70-$66 price area in the weeks ahead.

Get an email alert each time I write an article for Real Money. Click the "+Follow" next to my byline to this article.
TAGS: Investing | U.S. Equity | Consumer Discretionary | Futures | How-to | Stocks