AmerisourceBergen (ABC) made a base pattern in 2016 and 2017 and finally broke out to the upside in January of this year. Prices pulled back last month to retest the breakout level but have not regained their previous bullish swagger. A fresh look at the charts and indicators of ABC seems timely.

In this daily bar chart of ABC, below, we can see a strong rally from early November. ABC broke above its June highs in January but made a deep pullback in February to break the 50-day average line and test the rising 200-day line. This pullback to the 200-day line was deeper than I would have anticipated.

If prices pulled back to the $97-$96 area -- the June highs -- that would have been fine and "normal." But prices did not hold the breakout area and I find that a little disconcerting. ABC did rebound in February but it stopped below the January zenith. The next move for ABC is key now, in my opinion.

The daily On-Balance-Volume (OBV) lien has been weakening since late January telling us that sellers have been more aggressive. The Moving Average Convergence Divergence (MACD) oscillator turned down in early February and has been moving sideways around the zero line telling us that trend strength is questionable.

In this weekly bar chart of ABC, below, we can see the base pattern as well as the upside breakout. Prices are still above the rising 40-week moving average line but notice the movement of the weekly OBV line. The OBV line did not breakout over its 2017 high like prices did in January. Buyers have not been aggressive.

The weekly MACD oscillator has narrowed and could cross to the downside for a take profits sell signal.

In this Point and Figure chart of ABC, below, we can see a downside price target of $84 being indicated. 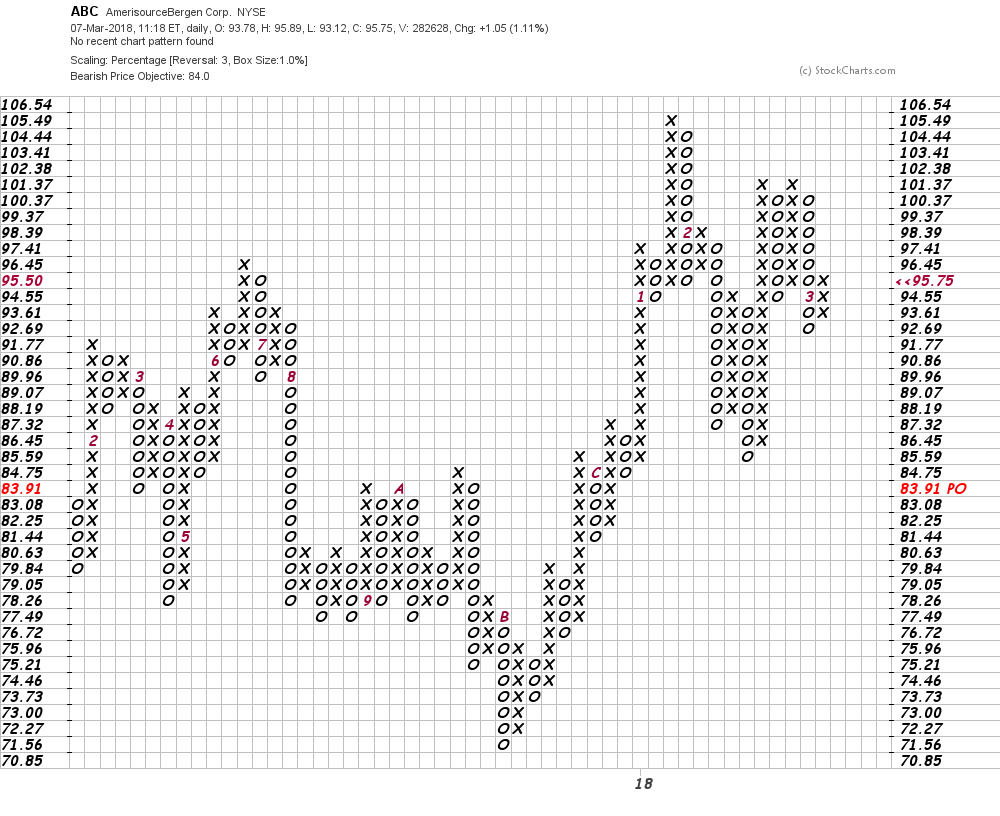 Bottom line: I never write that the technical approach is 100% and this example of the price action of ABC reminds me to remain humble. It certainly looked like ABC made an upside breakout in January but the action in February and March suggest that the base in ABC is likely to continue a while longer.