"Intelligence is the ability to adapt to change."

I want you to remember this. Gary Cohn is at the end of the day...but a man. Market participants have a great deal of confidence in this man, but as the sun rises, he puts his socks on one at a time. Just like you. Just like me. The similarities to some degree, end there. Cohn spent 14 months in the White House advising the president on economic matters. His impact has been behind the tax code re-write, and much of the regulatory rollback that have led to what appears to be, at least on the surface, an improved American economic condition.

Cohn claimed that it has been an honor to serve. The president called Cohn a "rare talent". I am sure that both of those sentiments were genuine, but the two men in the end, disagreed on trade. Cohn, a globalist in nature opposed the president's planned tariffs on steel and aluminum, and most likely to a greater degree disliked the way the news was disseminated. The president is, and has been as far back as I can tell, a protectionist. The president is not wrong in his thinking that the US is being abused from abroad... that there are nations that have flooded North American markets with product to take advantage of NAFTA rules that were negotiated well before this problem became as large is it is now.

The meeting that Cohn had planned with President Trump, and several CEOs from manufacturers that will be adversely impacted by these tariffs, as well as any retaliatory measures taken that had been scheduled for Thursday, is no more. That signals that Peter Navarro, a fellow White House economic adviser, who is protectionist in nature, and had helped the president put together this populist stance during his 2016 campaign, had won this round on policy. Navarro, as well as such well known names as Larry Kudlow and Kevin Hassett are being spoken about as replacements for Cohn at the president's right hand. We'll see.

What Your Pal Sarge Is Thinking

First let me warn you... the namby pambies will be out in force this morning. The only open outcry you might witness will be those who refuse to realistically adapt to a market situation that has just changed. They who whine will offer you no solution to your problems. Their only game is to cause you alarm. Cast them out.

The financial markets have had to tackle a lot of late. First, the January jobs report sent what I feel was a false flag on inflation due to an increase in year over year hourly wage growth. The truth there was that folks worked fewer hours producing in net... lower income in January from December. The ten year then saw it's yield push toward 3%. In response, volatility has been reintroduced to the marketplace. Overreaction was forced by both high speed algorithmic traders, as well as leveraged & inverse VIX related ETPs that ended up being the opposite of what some might call a hedge. Then in response to those perverse conditions... a short squeeze. Every dip offered an opportunity to get yourself into something that you had missed on the way up.

I took full advantage. Into names like Action Alerts PLUS holding Goldman Sachs   (GS) , Bank of America   (BAC) , McDonald's   (MCD) , salesforce.com  (CRM) , and Micron Technology  (MU) I went. Mostly for the better. As stocks rose, I took something off of the two financials there, staying long partials. Last week's dip? Same drill.

What You Want To Know

Reality is that Q4 earnings have beaten expectations 74% of the time. Those earnings sport a 16.2% year over year growth. Revenues supporting those Q4 earnings grew 7.8%. The Dow Jones Industrials are trading at 16.5 times forward looking earnings. The S&P 500? 17.1 times. The Transports? Just 15 times. Think these multiples are out of control in this environment? Me neither. They may shave those multiples a bit based on Gary Cohn's resignation. The market had great faith in him and he was faithful to the market. That said, Cohn's tax cuts aren't going anywhere. With the Fed's Beige Book scheduled for release this afternoon, and Non-Farm Payrolls looming at the end of the week, I am thinking that I might observe before acting on this dip. To be clear, that does not mean that I'll be a seller. That's not yet a thought in the back of my middle-aged brain.

Remember, The US economy, though some of the data like Durable Goods Orders and Factory Orders, have started to come in sideways... is still growing. Global growth is still synchronized. I think that Jerome Powell is likely to act appropriately. That said... Internationally, BOJ Gov. Hiruhiko Kuroda has decided that he really isn't turning into a policy hawk after all. The ECB steps to the plate tomorrow morning. Think they'll get aggressive? Nah.

You might expect on the eve of a perceived trade war, that small caps would outperform, given less exposure to international commerce. That makes sense. CACI International (CACI) is not a true small cap, but they're small enough, trading at a market cap of roughly $3.8B. The stock is a component of the small cap S&P 600.

What this firm does is provide solutions and services through simulation technology. Though there is some international exposure, the firm's primary clients are agencies and departments of the US government. Think the Trump administration plans to cut back on government spending any time soon? Just checking to see if you're awake. Product lines include business systems, command & control, cyber security, and enterprise information technology. The stock is currently trading at 17.5 times forward looking earnings, which is well below the 24.9 times sported by the Russell 2000. Debt is high, but both operating and levered cash flow are comfortable as is the firm's current ratio. That means that they should have no problem whatsoever meeting short to medium term obligations, gang. 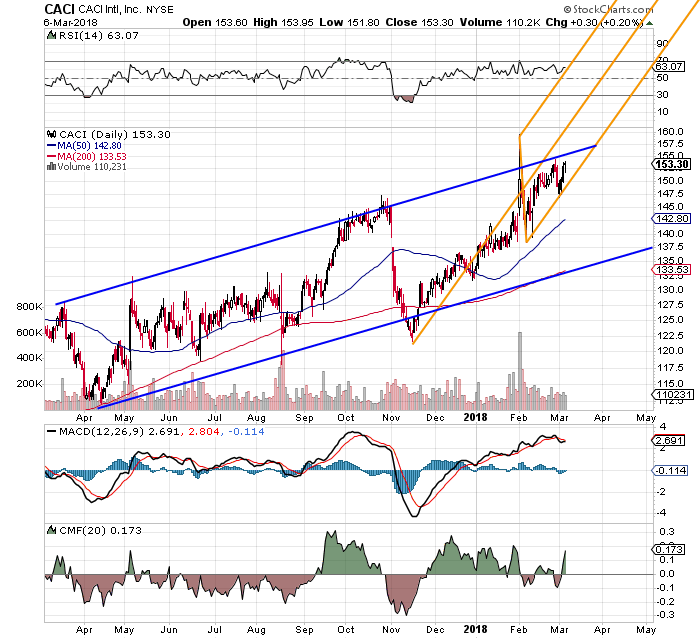 What's easy to see is a wonderful series of higher highs coupled with higher lows, that with some notable exception has been going on for quite some time. Since last November in particular, the success of the share's market price has been acute without suffering the pain seen across the rest of the marketplace that has been felt at times already mentioned late this winter.

All three of my primaries... Relative Strength, the daily MACD, and Money Flow look okay here, with the exception of the nine day EMA on the MACD. The upper trend line expresses the possibility of resistance in the near future. That's fine. This morning is not about taking prisoners. It might be about staying nimble, and finding plants that aren't poisonous though. The Pitchfork that begins with that November bounce tells a different story. That model allows for short term prices as high as 160, and support above 148 that rises to the current last sale (153.30) within two weeks.

I am not long this name. In fact, I came across it while scouring the market for something that might not hurt you, the retail investor at a time like this. I will not act myself on anything early this morning. That said, this name is now on my radar, and may end up in my portfolio after I watch it for a little bit, and learn more about it.

Author's note: Remember kids... after your health, the welfare of those you love and will defend, clean water, and the ability to make fire, everything else is gravy. If you're reading this, then you are already truly dedicated. Now, get truly motivated.

Get an email alert each time I write an article for Real Money. Click the "+Follow" next to my byline to this article.
TAGS: Investing | U.S. Equity | Technology | Markets | Politics | Stocks