Chubb (CB) has benefited by a rising tide for financials in recent months but it has its own price patterns and indicators to consider. Let's take a closer look.

In this daily bar chart of CB, below, going back 12 months we can see a different pattern than many of the other financials we have covered in recent weeks. Here we can see a rally from March to July followed by a shallow correction to October. In October and November CB tests the rising 200-day moving average line a number of times. There is another test of the 200-day average in early February. Prices are above the rising 50-day average.

The On-Balance-Volume (OBV) line was neutral to negative for much of the time from March to October. Since the end of October the OBV line has moved up strongly, signaling aggressive buying and accumulation. The Moving Average Convergence Divergence (MACD) oscillator spent much of the last 12 months above the zero line as it is now. The MACD oscillator has narrowed toward a possible crossover and liquidate longs sell signal.

In this three-year weekly chart of CB, below, we can see all of our favorite indicators in a bullish alignment. CB is above the rising 40-week moving average line. The weekly OBV line is possible and the weekly MACD oscillator is in a bullish configuration.

This Point and Figure chart of CB, below, shows how durable the uptrend has been. The current upside price target for CB measures to $156. 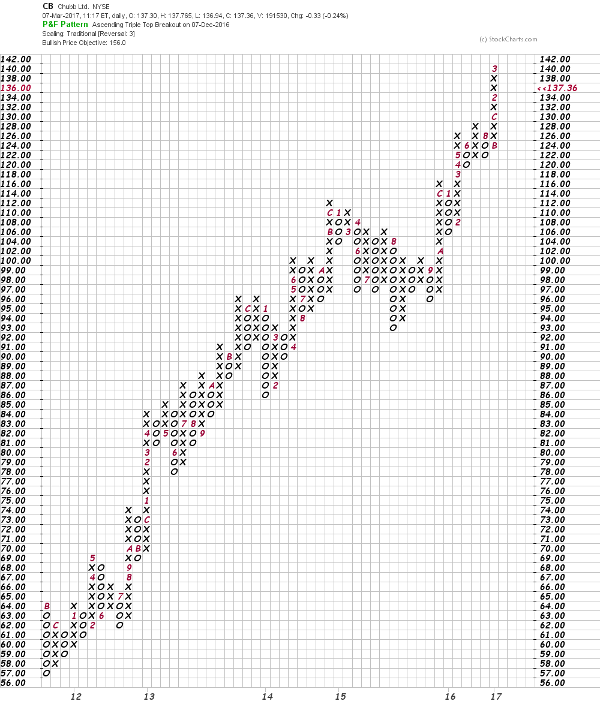 Get an email alert each time I write an article for Real Money. Click the "+Follow" next to my byline to this article.
TAGS: Investing | U.S. Equity | Financial Services | How-to | Stocks