Ever run across a sign like that on a long road trip? Your first glance immediately goes toward the instruments on your car's dashboard. The gas gauge? OK, I think we can make it. Anyone have to use the restroom? Ahh, maybe we better stop, just so we don't have a problem.

There are rest areas on the freeway of investing as well -- places where you can rest your mind a bit while reworking whatever it is that's not working for your portfolio. For me, these rest stops are stocks that I think will continue to pay healthy dividends.

Now, picking these isn't as easy as simply throwing money at bond proxies or going sector shopping. After all, we appear to be in a rising-interest-rate environment, not to mention a world that's heavily tilted toward both passive investing and very quick electronic trading.

If Mr. Market turns against your portfolio while you're at the dentist or renewing your driver's license (i.e., not watching your book every minute of every day), simply lining your portfolio with utilities or REITs won't save you. That's why I line my book with dividend plays from scattered industries.

Now, I might not be the sharpest pencil in the box, but I know that I'm not the dullest one, either. This is a strategy that's as plain vanilla as it gets, but I'm never sorry when I check my cash balance and see that someone has paid me a dividend simply to take on their equity exposure.

I'm sure you saw the news Monday that Nordstrom (JWN) had turned down a roughly $8 billion bid from a buyout group that included the Nordstrom family and private-equity concern Leonard Green & Partners. The offer amounted $50 a share, but JWN reached as high as $53.18 in early morning trading prior to this news.

So, $50-a-share doesn't seem like such a hot bid until you consider that JWN closed at $40.48 back in June when the Nordstrom family first announced its intention to take the firm private. Hmm.

As you might expect, JWN closed down 2.1% Monday and then continued to sell off in the overnight session. In fact, the whole retail sector gave up some ground on an up day, making this a good time to consider Kohl's Stores (KSS) .

Kohl's is a multiline retailer with stores that stand alone, well away from the struggling malls. And in my view (based on observing the work ethic of employees at three locations near me), the company is well-managed.

Another reason to own KSS is its relationship with what Jim Cramer calls "The Death Star" -- Amazon (AMZN) . Kohl's and Amazon have a deal whereby both sell Amazon products and Kohl's accepts Amazon returns at some locations.

A second reason to own the stock is that Kohl's is just plain kicking tail. KSS is up 37% over the past three months, a time when most retailers' stocks were swimming around looking for floating planks of wood to hang onto.

Just last week, Kohl's crushed expectations for both fourth-quarter revenues and earnings per share, and also reported that comparable-store sales rose 6.3%. Oh, and the company also raised its dividend. KSS now pays you a 3.67% yield just to own its shares.

Those kinds of results are why this stock was already on my book as a "rest stop." I enjoyed the firm's success throughout 2017's second half, and I appreciated its regular quarterly dividend as well.

Anyone who reads my columns or watches me on TV knows that I've long been fond of tech stocks in general and semiconductor names in particular. In fact, I've long held Seagate Technology (STX) as a core position even though the stock has had its ups and downs since peaking in late 2014.

In late February, Stifel slapped a $49 price target on the stock -- about 5% below the last sale at the time. But the firm did report some decent earnings for a change (or maybe it just felt like a change) in January. In fact, STX has reported a so-called "double beat" (besting analysts revenue and EPS expectations) for two consecutive quarters with a little help from the cryptocurrency known as Ripple.

And although I'll sometimes trade a portion of my Seagate position, I'll likely never completely remove it from my book's long side, as this name is a great "rest stop." After all, STX currently pays you a 4.66% dividend just to own its shares.

Another special thing about this firm is that even though it's gone through some tough times, management always makes dividend payments to shareholders. And I've only seen increases in these payments, even when the stock's yield seemed outlandish. On top of that, my core Seagate holding is up 22%.

Another tech name that I like is IBM (IBM) . It pays you a 3.88% dividend yield just to own its shares.

I like a good rest stop, but did you ever walk into the wrong bar late at night? You realize within a few seconds that this isn't the bar your friends are at, and that you might not get out of there in one piece.

Well, you might recall that your buddy came into 2018 feeling great about on the energy sector. I had traded Apache Energy (APA) very well over 2017's second half, while Schlumberger (SLB) had offered guidance that painted a rosier picture if we could just get out of a rough first quarter.

But then natural gas fell out of bed -- hard -- and APA didn't rebound where I thought it would. Even though I had bought some more APA shares, the pattern that I had expected suddenly looked broken.

So, I looked for another "rest stop" where I could park some dough until I figured out what Apache's new pattern looked like. A few weeks ago, I rotated out of 40% of my APA position at a loss and put the proceeds into Exxon Mobil (XOM) .

A home run? Not even close! XOM is actually down a little since that move. Still, the stock has fallen less than APA did over the same time span, and XOM pays a 4.08% dividend yield just to own its shares.

Chart Of The Day: Harley-Davidson

Motorcycle giant Harley-Davidson (HOG) has been in the news lately, with lots of talk about electric motorcycles that might or might not sound like gas-powered ones. And now we've gotten the almost-laughable threat of Europe retaliating against U.S. blue jeans, booze and motorcycles in the wake of President Trump's proposed steel and aluminum tariffs.

But sticking to my dividend theme, I'll point out that HOG currently pays a 3.27% yield, which is really pretty good. I'm just not sure if this name qualifies as a "rest stop," so let's chart it: 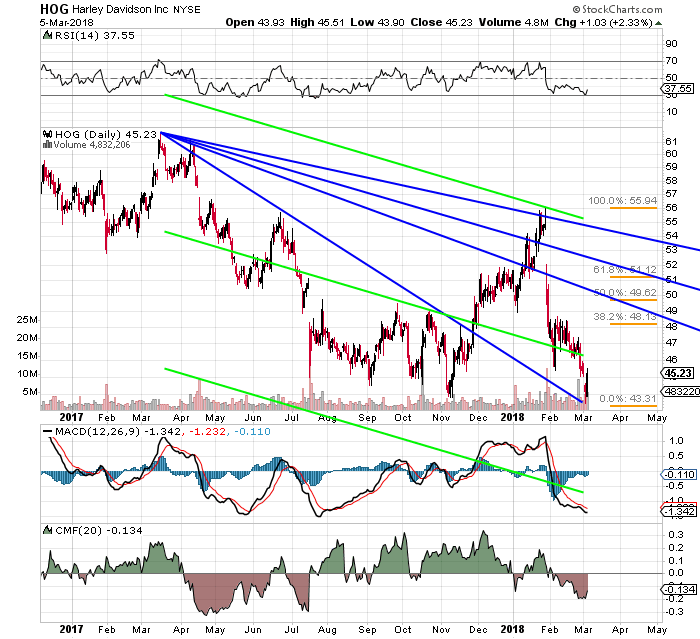 Plainly, the chart is just awful -- so awful that to display the stock's technical trend, I had to revert to a Raff Regression (the green lines above) because my preferred Pitchfork tool looked simply ridiculous for this name.

As you can see, the potential for much lower prices still exists. And don't even look at the Chaikin Money Flow (denoted "CMF" above) or the daily Moving Average Convergence Divergence (MACD) unless you're already shorting this name.

But what I find most cautionary here is that despite HOG's really disastrous performance, neither that Raff Regression nor the Relative Strength Index (marked "RSI" above) truly illustrate an oversold condition. Relative Strength is close to doing so in my opinion, but not in a protective way.

What should you do if you're currently long Harley-Davidson? Well, HOG traded at critical support on Friday and did recover. Hopefully, that gives the stock a new lease on life.

But look at the Fibonacci Fan model (the blue lines above) and the traditional Fib model (the small orange lines at the right of the chart). They both converge at $48 around May 1. To me, that would be both a target price and a good time to exit HOG.

Another thing long-and-wrong HOG shareholders could do is buy $42.50 puts that expire on May 18. That product last traded at $1.95. That will at least protect your "out" if support cracks between now and then.

You can fund most of this purchase by writing a $47.50 call expiring that same day. Those ended Monday at $1.65.

These are my levels to watch Tuesday for where I think that the S&P 500 and the Russell 2000 might either pause or turn:

Get an email alert each time I write an article for Real Money. Click the "+Follow" next to my byline to this article.
TAGS: Investing | U.S. Equity | Dividends | Stocks