It's been an interesting year so far. Given how strong 2017 was, coupled with tax reform that would be taking effect in 2018 (reducing both corporate and individual tax rates for the coming year) it felt smart to anticipate some selling in January. Waiting until the new year to realize gains would not only push the resulting tax bill out a year but would also reduce the rate at which said gains would be taxed.

As much sense as that made, that's not what happened. January was a record month for the S&P 500, Dow Jones Industrial Average, and NASDAQ indices. Energy led the way, with explorers/producers (SPDR S&P Oil & Gas E&P ETF (XOP) ), servicers (VanEck Vectors Oil Services ETF (OIH) ), and MLPs (JPMorgan Alerian MLP ETN (AMJ) ) all up more than 10% for January.

Now with February also in the books, things look a little different -- Energy is now the year's laggard and the major indices are barely positive for the year, after the early February correction took away all of January's gains and then some.

So is tax reform a positive or negative for the market? There seems to be a consensus among the financial punditry that it's unequivocally positive, but I'm not so sure I agree. Personally, I don't know that "good" or "bad" is an adequate description when it comes to big, sweeping changes like this -- there seem to be elements of both good and bad in just about everything. What market participants do seem to agree on is that February's burst of volatility likely marks the end of the long period of eerie calm we experienced over the past 12 months. We'll come back to this later...

We discussed late last year that one negative side effect of the tax bill was likely to be rising interest rates. After all, if the U.S. is going to be running up its deficits and debt, its creditors are almost certainly going to demand a higher rate on any new loans to the issuer of U.S. Treasurys.

This was largely ignored by the mainstream media, but it's something we have been watching closely. And we have steered clear of bonds and, for the most part, interest-rate sensitive securities (those that respond negatively to rising rates). Many of those interest-rate sensitive securities have sold off pretty aggressively on fears that the rise in rates may have much further to go -- and in some cases we see some attractive opportunities (REITs and Utilities in particular).

Depending on an investor's timeframe, bonds themselves may even look attractive. As a reminder, bonds generally do well when interest rates are coming down and poorly when interest rates are moving up -- and they can do very poorly if interest rates move up a lot, and quickly. But if you have been holding cash, waiting for a moment to finally deploy some capital into fixed income, now is a pretty decent time to do some buying, in my opinion. 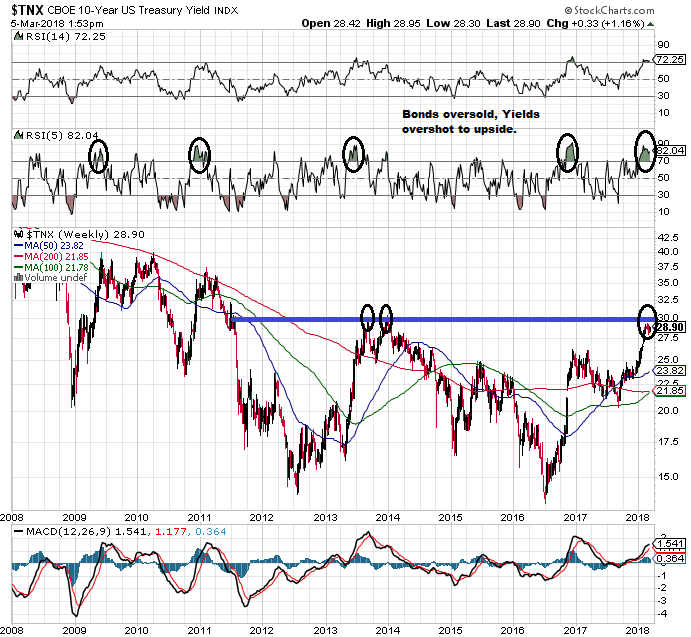 How did the long bond (iShares 20+ Year Treasury Bond ETF (TLT) ), Utilities (Utilities Select Sector SPDR ETF (XLU) ), and REITs (Vanguard Real Estate ETF (VNQ) ) do the last time yields touched this level and backed off? Below is a chart reflecting their performance on a total return basis (including reinvested dividends) from the area on the chart above marked above with circles-- end of 2013 -- through mid-2016 where yields bottomed. 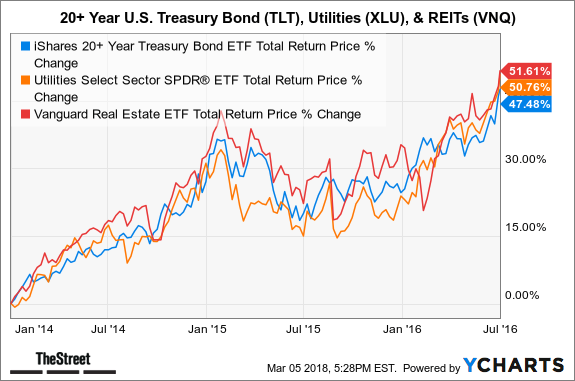 What I like about buying these interest-rate-sensitive securities here is that there's a pretty decent margin of safety. The prices have already come down quite a bit in anticipation of what rising rates could mean for their businesses and the attractiveness of their respective securities relative to safer Treasury Bonds. And both XLU and VNQ currently pay better annual dividends than a 30-year U.S. Treasury.

Below is the same chart with the S&P 500 (SPDR S&P 500 ETF (SPY) ) added to see how the holdings above performed by comparison: 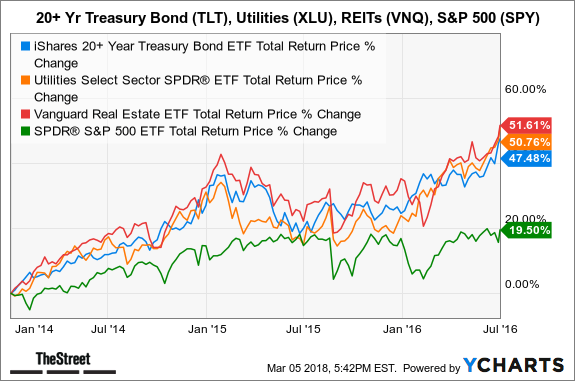 Now, if interest rates do not stabilize and/or come back down from these levels, REITs and Utilities (and certainly bonds) will likely continue to struggle. I think, depending on one's timeframe, you want to reconsider this trade/investment if the 10-year Treasury breaks decisively above 3.00% (the area that marks a pretty clear resistance on the first chart of this post).

But if we do back off of current levels -- and any more turbulence in the stock market would most likely send investors scurrying to the safety of bonds, therefore pushing yields down -- I think there is a very favorable setup to deploy some capital here.

Now let's get back to the subject of volatility. The last time I wrote anything on Real Money was nearly ten months ago, when we were in the midst of a record-setting calm streak in the stock market. The VIX, a common measure of expected volatility (based on S&P 500 option premium, which spikes when the market moves erratically) had closed below 10 for the first time in a long time. Single-digit measurements for the VIX are very rare -- there have been nine such readings since 1990, and every single one resulted in negative returns for the S&P over the subsequent 12-month period. More can be found in our post on this phenomenon here.

The VIX is now at about 18; below is a six month chart, with the breakout/explosion in February circled (not that it needs to be):

A higher VIX means the market expects a greater degree of volatility in the near future. Again, the market may end up being wrong about this, as neither the VIX nor anything else is a perfect predictor of the future, but a return to 2017 levels of tranquility doesn't seem likely anytime soon.