As investors, we've settled on focusing on well-run independent U.S. shale producers for the core of our holdings, especially those in the Permian basin. Although the oil markets seem to be stuck right now between $51-$55, these names have continued to hold their own and advance slightly. They will be the best positioned when oil breaks out of this range.

I don't want to write another column devoted exclusively to oil's range and the circumstances, both on the bullish and bearish side, for oil either stopping here or moving higher -- as I believe it inevitably must, and stunningly so. There are, however, a wealth of bearish signs, including a continual uptick in rigs and production here in the U.S., now again nearing 9.0 million barrels a day.

Also, despite some small drops this week, the contrast of speculative longs vs. shorts is as stark as it ever gets. Everyone on the speculative side being long is almost always a bearish sign, although I'll argue that the longs in the financial markets today are quite a bit different from those I encountered during my two+ decades trading oil on the floor of the New York Mercantile Exchange. 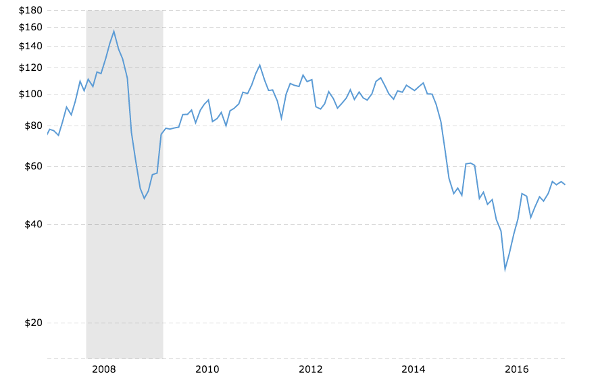 Still, I want to point out this chart of oil prices for the last 10 years -- and now I want you to imagine that chart extending for the next 10, which according to most of the oil experts out there will be an almost static and flat line moving upwards perhaps $10 over those 10 years. Puh-leeze. If they're right, it'll be a more than incredible contrast to the line that preceded it.

Either way you think oil is moving, whether higher or lower, you can almost certainly bank on it not being a straight line.

I want to move to the sub-sector of refining and note a few political happenings that might affect those stocks. Certainly, the new Trump administration cocktail of lower regulation, lower corporate taxes and increased military spending is sending the indexes running higher. Inside this administration of business folks, there are plenty who have skin in the game, and i suspect some are looking for some rule changes that'll benefit them and their companies. Much talked about is former Exxon (XOM) CEO Rex Tillerson and what some critics have said is his inclination to see Russian sanctions removed. Another is Carl Icahn, the Trump advisor on regulatory reform, suggesting a change in the ethanol blending standards imposed on refiners, putting the burden for increasing levels of ethanol in gasoline on the blenders instead.

Now, I'm no fan of the Environmental Protection Agency (EPA) mandates. They create a false "bitcoin-like" market in renewable identification numbers (RINs), the financial proxy for ethanol credits. These are bought by refiners that don't have the infrastructure needed to blend in the biofuels themselves. The program itself has done little to help the environment, if not actually moving the needle in the other direction, and it's made it more difficult to clear a decent profit if you are a refiner, while adding costs to consumers. But I suspect that Icahn's suggestion is far less about his problems with the ethanol program and more about his 82% stake in refiner CVR Energy (CVI) .

On the politically negative side for refiners, we still have the idea of a border adjustment tax that might or might not appear in the final Trump budget. Despite this idea getting a cold shoulder from most analysts, whether Democrat or Republican, it still keeps popping up like a vampire, refusing to die. It's particularly onerous on refiners, and even more so on East Coast refiners, who take a large share of crude oil from overseas.

On balance, refiners have had a tough year, even though 2016 gasoline demand has been the best in history. However, that demand is rapidly decreasing. Further, we've seen large gluts of gas in storage and the drumbeat of hybrid and completely electric cars is getting louder all the time. Altogether not a great environment for refining.

I wouldn't be buying refiners for the long haul as a core part of an energy portfolio based on possible political windfalls, even though the 4% dividend of solid refiners like Valero (VLO) looks so easy. Playing stocks through the political prism is always a difficult game, leaving little room for error.

Get an email alert each time I write an article for Real Money. Click the "+Follow" next to my byline to this article.
TAGS: Investing | U.S. Equity | Regulation | Markets | Energy | Politics | How-to | Risk Management | Stocks