A news story started making the rounds a little before mid-day on Friday. An SEC filing that was submitted on February 22, disclosed that Carl Icahn, a known confidant of President Trump, and former White House adviser, had made a systematic sale over several days of Manitowoc (MTW) stock worth roughly $31.3M. Manitowoc, for the uninitiated is a leading manufacturer of cranes, and is heavily dependent upon steel, both domestic and imported, to manufacture its products. MTW's foreign suppliers include Bekaert SA, a Belgian maker of wire products and steel cables, as well as South Korea's Dongil Metal Co., a maker of parts for construction companies.

Icahn made his sales from February 11th through February 22. It is that timing that has now become the story. As you might recall, the president called for an investigation into the unfair dumping of steel and aluminum by foreign entities on national security grounds last April. The Commerce Department delivered their recommendations to the president in January, and those recommendations were made public on February 16th.

We all know what happened on Thursday. President Trump made known his intent to implement tariffs of 25% on imported steel, and 10% on imported aluminum. This news has an obviously negative impact on the stock market in general based on the prospects of a trade war, and even more acutely on firms that make use of these imported finished metals to produce their own goods. Think Boeing (BA) , think General Motors (GM) and Ford (F) . The list goes on and on. The list, unfortunately also included Manitowoc. By the way, Carl Icahn resigned as a White House adviser back in August.

Who would think it? I don't know Carl Icahn. I honestly have no idea if anything is being implied by those initiating this story, but it should be noted that even after this sale, Icahn remains the firm's fifth largest shareholder with a 4.8% stake. On top of that, as a trader and investor, there is certainly ample justification for a holder of this firm's shares to have made a sale when Icahn did. I'll explain.

The firm reported Q4 earnings after the closing bell on February 8th, which was a Thursday night. The firm beat expectations for revenue, but badly missed (ten cents) projections for earnings per share. The next day, Friday... February 9th, the stock was wildly volatile. The name opened higher, and then traded in range that spanned $6.61 on extremely high volume. Within that range was a 17% drop from top to bottom that took less than two and a half hours to complete.

Carl Icahn started reducing his exposure to this name on the following Monday, which was the twelfth. I think as a trader, that those earnings, and the stock's subsequent highly volatile behavior might be enough to make many traders take something off of the table. By February 16th, after the recommendations were made public by the Commerce Department, the stock would break a key technical level to the downside, and at that point would just keep on going. The fact remains, that Icahn remains a large shareholder, and that his sale came to nearly one million shares.

Like I said, I know nothing, but it is easy to see a fundamentally sound reason for any investor to have made these sales when they were made without access to any non-public information. 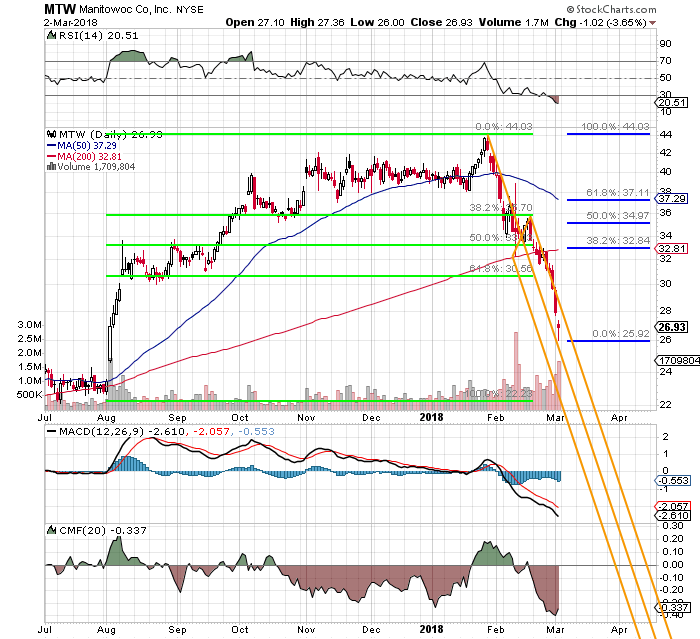 You can see on the chart that the stock closed well above it's Friday lows. That does not necessarily entice me. I really do not know if I have ever seen as horrible looking a combination as what the daily MACD, Chaikin Money Flow, and Relative Strength are all exhibiting at the same time right now.

On top of that, the Pitchfork is useless as the downward trend would appear completely unsustainable. I would not be getting long this name, but if you already are, my thought is that you can get a better out than this. If Friday's low holds into next week, the next Fib level (blue) is a long ways off. That spot also happens to be where the 200 day SMA lives. That for me would be a target price, but that's more than a 2.2% move. That could be tough in this environment.

I would not recommend writing puts down here if one is already long as you could get caught in another downdraft, but you know what? $32 April puts last traded at $0.51. If you're already wearing these, why not shave half a buck off of your net basis cost?

If you don't have to be here, why be here? I would rather own fewer shares of Caterpillar (CAT) than more shares of this name, but that's just me.

Get an email alert each time I write an article for Real Money. Click the "+Follow" next to my byline to this article.
TAGS: Investing | U.S. Equity | Regulation | Markets | Basic Materials | Economy | Politics | Stocks