Barron's ran a story last week asking what recent stock price action was telling traders. Did February's surge mean the economy was about to take off? Could it have indicated tax reform was certain to come quickly? Were this year's gains just getting started, or about to reverse?

Contrary to what many people think, more often than not "the market" knows absolutely nothing. How can I make such an audacious statement? It's an easy call for those of us who play in the options arena.

I chose a few names to illustrate just how clueless most traders are. If you knew that 2016's biggest-gaining S&P 500 stock, Nvidia (NVDA) , was still headed higher, you'd probaly load up on January 2018 call options. That would give you a highly levered play on further gains.

That's fair enough if you knew the shares were headed for $120 to $150 by then. You don't know, however. That's why NVDA's $100 puts for the same strike price and expiration date were going for $14.70 at exactly the same time.

Traders going long those puts, and holding through expiration, could only make money if NVDA fades to under $85.30. Which option buyer "knows" something? The one betting on north of $115, or the one wagering on a plunge?

If NVDA wanders more or less sideways, both call and put buyers would end up losing money. Anywhere between $85 and $115 next Jan. 19 would lead to that result. Ouch.

NVDA is not an anomaly. Oil refiner HollyFrontier (HFC) was going for $28.16 Thursday afternoon. Call buyers were ponying up $3.72 per share for HFC's January 2018 $28 calls at the same time that bearish players were paying $4.10 per share for the right to sell HFC at $28.

They are betting on opposite outcomes. Optimists need a move to higher than $31.72. Pessimists on HFC's prospects would have to see it below $23.90 to make their first dime, if held to expiration.

Anything is possible. HFC's trailing 52-week range runs from $22.07 to $39.17. Even so, which of those traders knows anything about the future price action? Maybe neither.

Those who like this, or any other stock, on fundamentals can often benefit from the huge differences of opinion by going long the shares while selling both a call and a put. If executed in a margin-type account, the cash outlay would drop to just $1,861 per hundred shares as premiums collected can help pay for the shares. The margin requirement on the naked put could be met with pre-existing paid-up equity, already held in the account.

On expiration date, only two possibilities exist. URBN will either be $27 or higher, or under $27.

Let's take the worst-case first. Any close below $27 would leave investors with twice the original number of shares, but at a nice discount to the trade inception price. 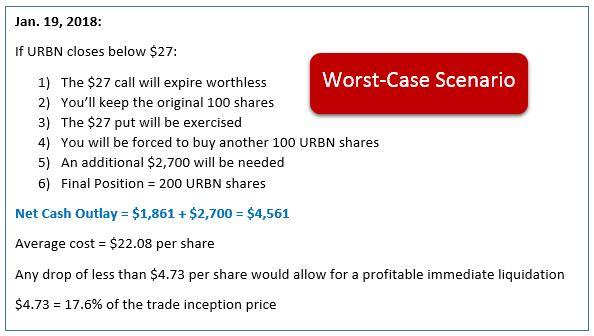 Selling the entire stake immediately would be a winning trade as long as URBN had not fallen by more than 17.6%.

Future price action cannot be guaranteed. I can say for certain, though, that URBN's trailing 12-month range has run from $24.29 to $40.80. Looking backward, there wasn't one day in a full turbulent year when that break-even point was violated.

Now for the good news. If URBN recovers to $27 or better early next year, gaining just 19 cents from the trade's starting price....

Those who executed the buy/write combination as described would end up with nothing but cash. Making $839 on a $1,861 outlay is a terrific percentage gain. That's especially true when considering it only required a less-than-1% upturn in the underlying shares.

Markets often know little. If you feel strongly about a stock, this is a great technique to lever profitability while also obtaining a nice margin of safety, just in case.

Get an email alert each time I write an article for Real Money. Click the "+Follow" next to my byline to this article.
TAGS: Investing | U.S. Equity | Technology | Energy | Consumer Discretionary | Options | Short-selling