" I will seize fate by the throat; it shall certainly never wholly overcome me."

The Dow Jones Industrials swung 743 points on Thursday from a high produced during Jerome Powell's testimony before the Senate Banking Committee through the day's end. That testimony was, other than the BEA's release of a rather benign PCE Price Index, supposed to be the day's headline event for the investment community. Supposed to be....

It was then that storm clouds gathered on the horizon. The DJIA would surrender 1.7%, the third consecutive day that the blue-chip index declined by more than 1%. This would be the first time that equity markets would experience such a three day beat-down in more than two years. The index is now, once again ... down for 2018, after seemingly rebounding somewhat nicely after the volatility inspired "flash correction" of earlier this winter.

The beating was quite broad. Both the S&P 500, and the Nasdaq Composite ran lower by a rough 1.3%. All 11 sectors soiled the earth with their blood. Only the small caps and the transports, both lower for the day ... appeared to resist in anyway the mounting pressure as the day wore on.

The catalyst for at least yesterday's selloff, was not difficult to figure out. President Trump announced his plans to impose tariffs on imports of steel (25%) and aluminum (10%). The moves come after Commerce Secretary Wilbur Ross made recommendations to do so, based on national security concerns at the conclusion of that department's section 232 investigation. National security concerns are the official motive.

The moves have been vilified in the media. Financial markets sure took the news hard. Hey, I get it. Tariffs are taxes. Nobody likes taxes. Are not the other guys already imposing such taxes on US manufacturers though? We know that there is dumping of steel and aluminum going on with the intent of perverting fair trade. We think we know that Chinese steel has been finding it's way to market through circuitous routes, blurring the determination of origin. This makes, in my opinion inaccurate much of the statistics showing what nations will be impacted by this the most. The truth I feel is that we just don't truthfully know how much steel and aluminum is actually imported from our partners in the NAFTA deal, and how much is actually the result of dumping, and re-routing.

This is a serious problem that does hurt US industry. Both Presidents Bush and Obama tried to address this problem. President Trump is not the first by any means to try to tackle this. Both of his predecessors largely failed in this arena. He is different. I think we all know that. He is a populist, which means that unlike an ideologue... he can twist with the winds of change to his liking.

When someone holds you up against a wall and takes your lunch money every day for 30 years or so, the day that you finally try to make a stand... are you really the one starting that fight? New York Fed Pres. William Dudley said yesterday that "trade barriers are a very expensive way to preserve jobs in less competitive industries." Dudley also warned that protectionist policy often backfires just to increase domestic costs of both goods and services. Uhm...aren't we trying to produce some inflation? Asking for a friend. If a president feels as though his nation's industry has been unfairly injured by poor policy, and by the poor response of his own predecessors, is he supposed to just sit on his hands? This president did run on this platform. He is not springing this on anyone.

Think of this another way. Perhaps as this "announcement" is not yet final, we really just don't know exactly what it truly entails. This president has already shown many times over that he likes to take an extremely aggressive opening stance in order to rattle his opponents, and then upon negotiation, be willing to settle for something less. Maybe this stance is just as much about NAFTA, as it is about China, and the rest of Asia. The problem for the marketplace right now, is the uncertainty of it all.

Interestingly, once the key S&P 500 2700 level broke yesterday, it broke hard. The next support level on the way down, believe it or not, was the 2659 level. That is precisely where the index bottomed. You really can't make this stuff up. Did you think humans were still running the show? Think again. We are not at all that precise. Was the selloff overdone? It felt so, in my opinion. That doesn't mean that I know more than anyone else. Over the final three hours of trade yesterday, every share that I traded was a purchase. Futures are trading well below Fair Value this morning. This was not by design. I only realized that fact as we drew toward the closing bell.

Obviously, the firms that took the hardest beating are those that produce their own product using imported finished metals. Think Boeing (BA) , Ford Motor (F) , General Motors (GM) , United Technologies (UTX) , and Caterpillar (CAT) , amongst many other industrial names. The beat-down unfortunately extended well beyond those firms though. Even though US policy has not been finalized, traders are apparently anticipating a retaliatory response from China.

This put the whammy squarely on the tech sector, with a focus on the semi-conductors, a group that I have great personal interest in. Down went Nvidia (NVDA) . Down went Intel (INTC) . Down went Micron (MU) . Down even went Apple (AAPL) . Will Apple sales in China be restricted in some way, forcing lost market share?

How about agriculture? How about the internet? Facebook (FB) , and Alphabet (GOOGL) could face some kind of bureaucratic nightmare should an actual trade war kick off. Netflix (NFLX) seemed to fly above the pack yesterday. What then of all of our synchronized global growth that economists have been crowing about? Is that now in jeopardy? Ah, more uncertainty. The truth is, probably not, but the market has to price in every possibility.

Remember what I told you about the "Ugly Stick"? When it's out and about, people get hurt. I think the stick may be out for a while. Get used to it. Adapt to it. It does not feel very good right now.

Oddly, the crowd did not flock to gold yesterday, though the crowd did seek safe haven in US Treasuries. This put downward pressure on the 2year/10year spread. This morning, that spread stands just a smidge above 58 basis points, which is why you saw pressure on the banking space that was in line with some of the day's worst performing sectors.

Hide in those who would directly benefit from these tariffs? US Steel (X) ran 5.8%. Century Aluminum (CENX) , Nucor (NUE) , and AK Steel (AKS) all ran much higher as well. I would think that you need some exposure here, though it is probably a little late for that. For myself, I would avoid over-exposure to the group, as like the opinions of a populist president, the fortunes of those he favors can dangle in a shifting wind.

Chart Of The Day: Salesforce (CRM)

So, I did some shopping yesterday in some names that I had missed on the way up. For many longs though, the last sales are stiff so far above average cost levels ass to make adding shares at this time prohibitive. Still there is one name that just keeps chugging along. I waited. Then I waited some more. Salesforce (CRM) just would not come in with the marketplace. I felt envy. Envious of those who had the foresight to chase this name on other, earlier days. Really, any day since last summer would have been a good time to take an offer regarding this one.

Perhaps today, will be my day. We all saw CRM beat Q4 expectations for both EPS and revenue. We all saw the firm crush expectations for billings... for bookings (real important), and for backlogged orders. In other words, these guys are hitting it out of the park. Salesforce guided Q1 expectations above consensus. Wall Street raised target prices in response. That said, let's not rely on Wall Street. Let's do our own homework, shall we? 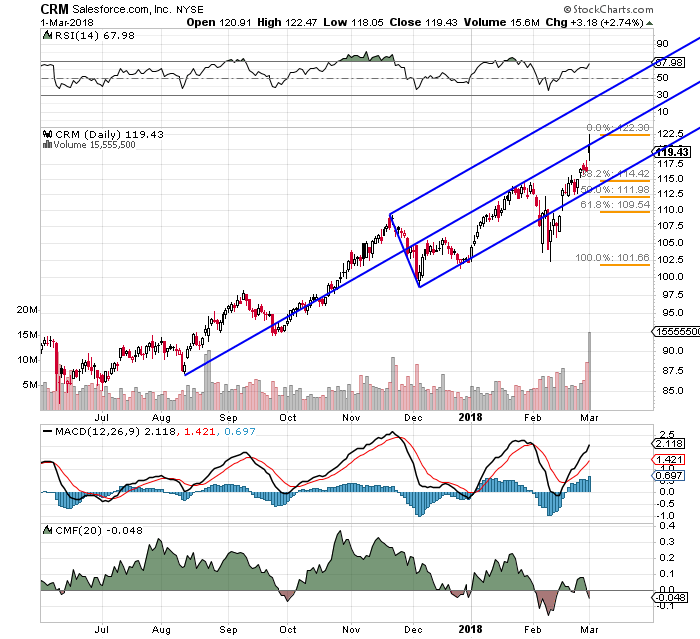 So, can I buy this name today? Everything looks great. Relative Strength, Rising daily MACD with all three EMAs above zero. An awesome looking trend, that at yesterday's highs threatened to take down the central trend-line on my Andrews' Pitchfork model.

Just one thing. Equity index futures are weak again today. As Doug Kass pointed out yesterday, the pajama traders nailed it yesterday. This stock? Down a couple of bucks in the overnight. So where? Where in the name of Marc Benioff may I plant my flag without being immediately run over in a nasty tape?

My thought is to pick up maybe one tenth of my intended position size below 117, and add another tenth between 114.50 and 115 if I might be so lucky.

That would be enough equity exposure initially, I think. Keep in mind that premiums paid on CRM options are worthwhile, even short-term. Last night 112 puts expiring in three weeks last paid 1.11, while 110 puts expiring on the same date last paid 0.54. That's really not bad, and if the name does open on weakness, this will pay even more...or one might adjust strike prices in order to stay on the periphery.

Get an email alert each time I write an article for Real Money. Click the "+Follow" next to my byline to this article.
TAGS: Investing | U.S. Equity | Transportation | Financial Services | Industrials | Technology | Commodities | Stocks