When markets are trading at all-time highs, it's time to think about ringing the register. It's not time to get out of the markets completely, but it's a good time to lighten the load on a few select names.

For example, back in December I recommended both Home Depot (HD) and Lowe's (LOW) . Home Depot remains in an impressive uptrend and continues to reach fresh all-time highs, so there is no reason to sell. Not much to see here, just higher lows (HL) and higher highs (HH). 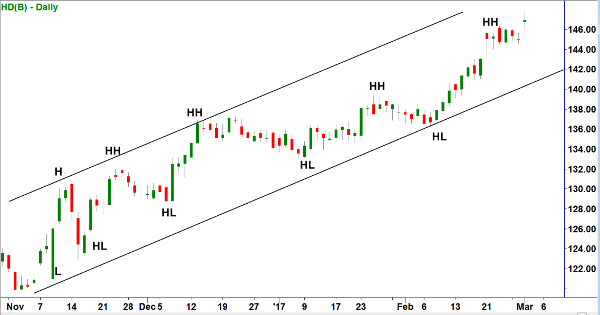 However, Lowe's has just reached the price objective of $81 given in that December article. Lowe's hasn't reached a new high; in fact, it has gapped up into a thicket of resistance that was created in August (shaded yellow). Lowe's is also overbought, according to its RSI (relative strength index) indicator. It's time to lighten up on Lowe's. 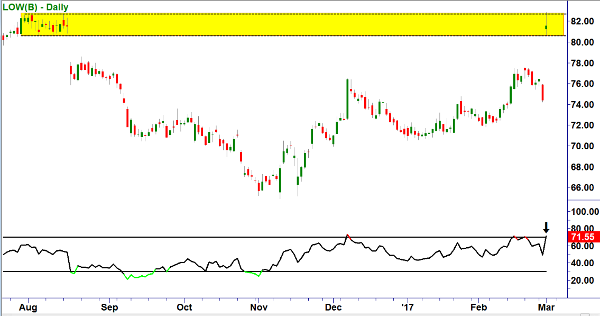 We are also ringing the register on NutriSystem (NTRI) . This was a $30 stock back in October when I first recommended it. NutriSystem has gained over 50% since then, thanks in part to a sharp move earlier this week.

It's also wildly overbought, with an RSI reading above 86 (arrow). The chart now contains a huge gap (shaded yellow). If that gap is filled, it'll be a painful experience for the longs. 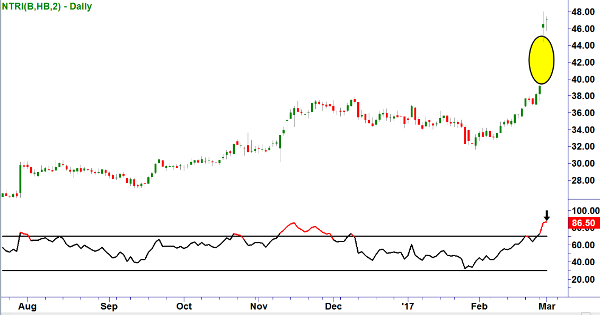 NutriSystem reported strong earnings and revenues this week, and guided analysts' expectations higher for 2017. Now that it has raised the bar, it's going to be harder for the company to crush expectations like it did this week.

The stock's rapid ascent has distorted its valuation metrics. NutriSystem now trades at 45x trailing earnings, and at over 20x enterprise-to-EBITDA (earnings before interest, taxes, depreciation and amortization).

It's much harder to justify owning NutriSystem at $46 than it was at $30. I did sell part of the position in November, as indicated here. Now I'm selling the rest.

Finally, I'm going to cover one of my few remaining shorts. The iShares Nasdaq Biotech ETF (IBB) is in breakout mode. IBB has spent the past six months struggling to overcome resistance (dotted line). Yesterday, IBB closed above $300 for the first time since September. 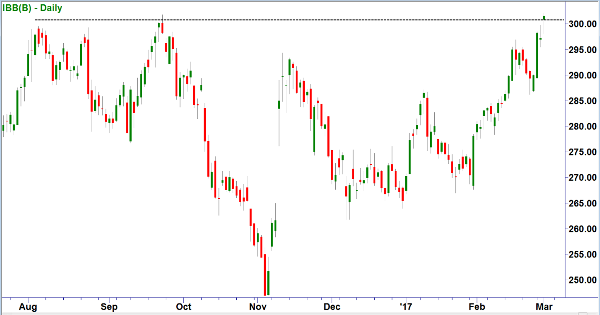 My IBB short was something of a hedge, as I never want to be 100% long or short. However, I am now overwhelmingly long.

You can't dispute the fact that we are in a raging bull market. When the indices settle down, opportunities to construct a more balanced portfolio will appear. In the meantime, we are lightening up on select longs like Lowe's and NutriSystem, and covering our few remaining shorts like IBB. The rest of the portfolio, consisting overwhelmingly of longs, will be allowed to run for now.

Get an email alert each time I write an article for Real Money. Click the "+Follow" next to my byline to this article.
TAGS: Investing | U.S. Equity | Healthcare | Consumer Staples | Consumer Discretionary | ETFs | Funds