"Now, on nights that I can't sleep, I play video games alone until the morning."

At this point, all we can really say, is that the month of February is over. What is not over, and will not be done away with so easily, is the re-introduction of volatility to a marketplace that had become overly complacent. Yes, you know that is true. Even for us old-timers who have lived through some of the U.S. equity market's most volatile eras had let our brains accept that success in these markets was somehow easier now.

Gang, Pandora's box has been opened. The beast is out. The Ugly Stick is out and about. Moles are getting whacked. I find it likely that in this environment where machines act much faster than humans ever would have, that short-term trading behavior has to, and is evolving quite rapidly.

Those of you who have ever been force-marched twenty something miles over rough terrain with a 100-plus pound pack on your back, having to dig a hole in the ground every time you stopped for a few minutes know that the last word in that expression is not "hurt." This is a family publication. Yet, embracing the environment is the only way to truly understand what you must adapt to in order to overcome obstacles that one is able to impact on a personal level, and find work-arounds for what is larger than that.

Wednesday, it took 90 minutes to collapse a marketplace that looked to be treading water at that key technical level in the low SPX 2740s. The bough broke. The cradle fell. The 50-day moving average fell. Know what? That was not even a key level. "They" mentioned it all night. Baloney. The algos have not been reacting to the 50-day. Why should we? SPX 2700... Now that's a horse of a different color. That spot has already provided support three times since Feb. 20. If you think the artificial intelligence behind these electronic traders does not also see that, you are kidding yourself.

Month's end brought with it some re-balancing, as it always does. This time, on top of the usual market moves, we knew that globally at least $9.5 billion had to move, that almost 60% of that total number was going to move in the western hemisphere, and that this portion of money being moved would be primarily to the sell side. The late timing, and the magnitude of impact, we did not know. It was all public information. That's why the volume was so heavy, by the way, not due to some kind of conviction to a risk-off sentiment. Not yet, anyway.

So, my friends, the choice is simple. Love it, or leave it. You can put your head in the sand. Leave your welfare up to passive management. You may have noticed that this increase in passive management also has a tendency to increase the violence seen in rotational movement. Or, you can pick up that shield of yours, you can grasp the saber of hard work and discipline, and thou can wade into thy enemy. You may fall, but prior to that you will stand with honor. Hmm, or maybe some mix of the two investment approaches would be appropriate for most.

They bought Treasuries yesterday. They have been buying them all night. Yields on the U.S. 10-year have declined from nearly 2.92% on Monday. As I bang this note out in front of a blackened office window, the 10-year gives up a "mere" 2.838%. The spread between the two and 10-year Treasuries has been compressed to barely more than 60 basis points, after approaching nearly 80 only a couple of weeks back. That makes the financials a lot less of a sure thing this morning. I still think that you want a bank highly exposed to interest-rate movement, and one better suited to trade a volatile environment, but I would caution again about over-exposure in this space.

Fed Chair Jerome Powell will sit before the Senate Banking Committee today. His testimony will likely not stray far from what we saw on Tuesday, but the infantile questions posed by the legislators could be different, thus provoking slightly different responses. Algorithms do hunt for key words. Keep that in mind.

Before we even get to the Fed Head, we will be faced with the 08:30 ET release of the PCE Price Index release for January. The Core rate printed at growth of 1.5% for December. Continued growth at that precise pace is what is currently expected for today. This number will impact Treasuries, Futures, dollar valuations, and likely questions posed to Jerome Powell later in the day. In other words, wear your helmet, and buckle your chinstrap. What? Did you think you were John Wayne?

...that not only did weekly U.S. inventories for both oil and gasoline print well above expectations Wednesday, causing the rout in the underlying commodity as well as the energy sector, but that the Energy Information Administration revised their crude production estimate for last November up to 10.057 million barrels per day. Really? Why, yes. That, my friends, breaks a record set in 1970 -- so long ago that pitchers still hit in American League games.

That while the whole planet was mocking the iPhone X, and the iPhone 8 as being overpriced, and many expressed disappointment in the "super cycle," something else was going on. Sales of Apple (AAPL) cell phones only accounted for roughly 18% of total unit sales in Q4 2017. That 18% market share actually took down 87% of smartphone profits, industry-wide for the quarter. There is something to be said for profit margins, gang. Samsung? Oh, they led the league in smartphone sales, yet somehow produced only 10% of industry-wide profits for the quarter. Hey Sarge, aren't you long AAPL? Duh. Why do you think I bring this up?

Activision Blizzard (ATVI)  suffered through the flash correction just like everyone else. On Feb. 8, Action Alerts PLUS holding ATVI reported Q4 earnings that beat expectations on both the top and bottom lines. Revenue, in fact, posted at record levels. Full-year operating cash flow? Another record. Overall, the firm can boast 385 million monthly active users. For comparison, current estimates for the U.S. population are running at roughly 328 million.

Players, by the way, spend about 50 minutes per day playing games across the Activision, Blizzard, and King lines. What these folks do for a living, I can't imagine, but hey, I'm an investor.

On Feb. 21, NDP Group announced that video game sales had grown 59% for January on a year-over-year basis. Hardware (+119%), Software (+51%), and accessories (+37%) all shared in the growth. Maybe, it's just more fun to pretend you live in another world. I don't know. I don't care. I only care if I can somehow profit from the growing behavior of these basement dwellers.

Chart of The Day: Activision Blizzard 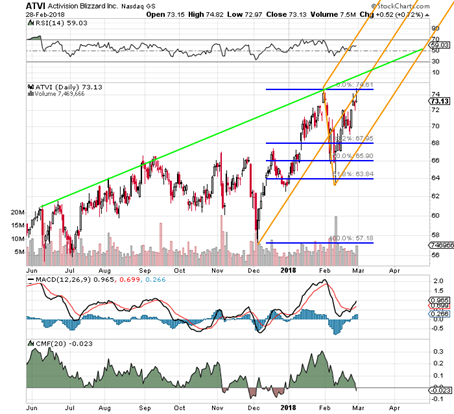 Take a look at this. ATVI stock closed higher Wednesday while the entire equity world went into a late-afternoon free-fallapalooza. The trend from June (green) presents a straight line to victory. The stock bounced smartly off of the flash correction at nearly a precise 61.8% re-tracement level (blue).

Relative Strength? Improving. Daily Moving Average Convergence Divergence (MACD)? The 12-, 26-, and 9-day exponential moving averages (EMAs) all present in positive territory, and guess what? The name just experienced a bullish cross-over. Money Flow? Meh. That said, ATVI has been in the green all year.

Am I worried about my long position in this name in this environment? The truth is that I wish I bought more. If this environment allows me the chance to get more at a discount. I will act.

Since December, the trend has been sharp to the north, even accounting for a choppy February. The stock now stands where it has failed before. The Pitchfork (orange) illustrates a share price pressed up against the resistance of a central trend line that if taken and held, could allow for prices as high as $80 later this Spring. Even failure at this spot looks to me to likely benefit from rising support that approaches $72 within a couple of weeks.

Don't have the cash? Cautious about making a large capital outlay? The $72 puts expiring in two weeks went out last night with a bid of $1.22. What does that mean? Simple. If you write that put, you produce $122 worth of revenue less commission. Even if you get run over, your net basis cost is $70.78 for shares that you thought were attractive at $72, and had closed at $73.13 when you made the decision. In fact, if the premium is still there this morning, I'm going to write this put. Race ya.