We added Facebook (FB) in November to TheStreet's Trifecta Stocks model portfolio that we co-manage, and even though the stock is off of a 52-week high set earlier this month, we're still up more than 50% on the position And with our $225 price target (24% above the stock's $181.86 close on Tuesday), we continue to see ample upside to be had as Facebook continues to monetize its various platforms.

Here's a deeper dive into the stock's prognosis:

A Market Leader in a Booming Business

Facebook remains well-positioned to capture the incremental advertising spend that continues to shift away from traditional radio, TV and print. The company not only operates its namesake Facebook.com service, but also owns the popular Instagram, WhatsApp and Messenger platforms as well. All told, Facebook had 1.4 billion daily active users and 2.1 billion monthly ones spread around the world as of 2017's end.

That engagement comes at a time when mobile-video platform Magisto estimates that total U.S. digital-video marketing reached some $135 billion in 2017, including $83 billion spent on digital ads. Interestingly, that last figure eclipsed the estimated $71 billion that companies spent on TV ads last year. Forecasts call for digital to take an even greater market share years to come, as this chart from eMarketer.com shows: 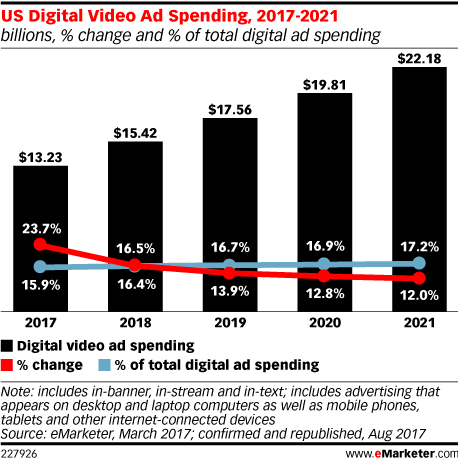 We chalk these gains up to a combination of "cord-cutting," growing adoption of streaming services like Netflix (NFLX) and increased use of video advertising on social media. Think of it as advertisers aiming to reach consumers on whatever device the public chooses to be on.

That's great news for Facebook, which captured more than one in five U.S. digital-ad dollars in 2017. Instagram's share of the U.S. mobile-ad market has also breached 5%.

Facebook recently reported fourth-quarter results that smashed expectations, but also talked about business changes that would impact time spent on Facebook -- at least in the near term as the company focused more on "connecting people" and "healthy interaction."

This came a response to criticism that FB received in 2017's second half over alleged "fake news" appearing on its platforms. It also represented part of a strategy to lure back Facebook users -- particularly in the United States and Canada, where the company reported a drop in daily active users for the first time. Management revealed that these changes led to a 5% reduction in average user time spent on Facebook during the fourth quarter -- news that sent FB shares lower in aftermarket trading that night.

But then came Facebook's earnings call. CEO Mark Zuckerberg and crew reiterated their strategy pivot, but also disclosed that advertising impressions continue to grow, and more importantly, that ad prices on the company's platforms are climbing. Management also once again guided for a large uptick in spending -- something we've heard several times before, but never seems to get in the way of Facebook meeting or beating bottom-line expectations.

Beyond Facebook.com and the United States

Also remember that Facebook the company is more than just the Facebook.com and the U.S. market. For instance, the firm boasts 1.5 billion monthly active users on WhatsApp and 300 million daily average users on Instagram.

And while total U.S./Canadian daily active users across all platforms did dip by 1 million quarter over quarter during the fourth period, it solidly grew in the Asia-Pacific and "Rest of the World" categories.

And despite U.S./Canadian user dip, revenue for the region still grew 27% quarter over quarter. That supports our view that growing advertising volume and pricing will more than offset any short-term disruptions in average daily active usage.

Outside of the United States and Canada, Facebook also continues to make solid progress in monetizing other geographies, as this chart shows: 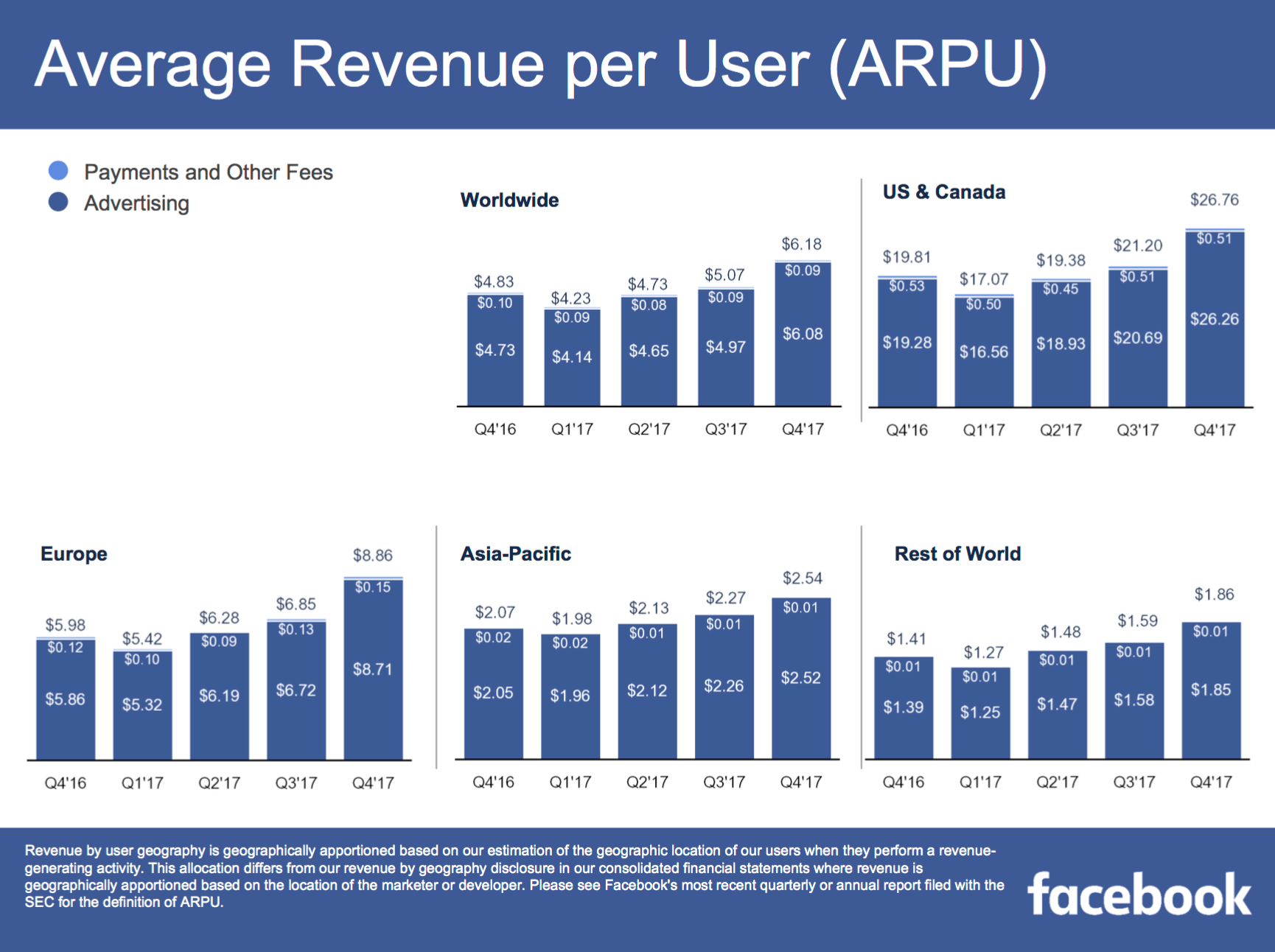 The company reported solid revenue gains in Europe (31% quarter over quarter) as well as Asia-Pacific (17%) and the Rest of World (21%). We see all of this reflected in Facebook's overall average revenue per user, which rose 22% quarter over quarter and 28% year over year to reach $6.18.

Facebook got hammered during the market's recent volatile period, and while it took a while to recover, it's back near all-time highs.

However, this chart shows that the stock's uptrend (the tan line below) was tested and held firm. That said, a recovery to higher prices is predicated on recapturing the 20-day moving average (the blue arrow below): 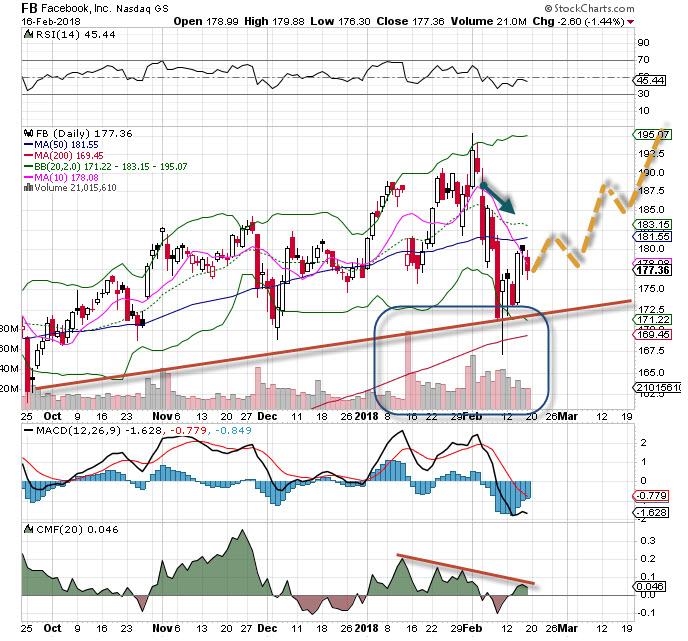 We believe this could happen after a bit more consolidation. After all, Facebook often demonstrates good market leadership and attracts institutional money.

So, if the market recovery continues, that should help drive funds to this mega-cap name. If that happens, then the stock's recent pullback might turn out to be a really nice buying opportunity, where you can get FB at around 7% below its all-time highs.

As Facebook looks to further monetize its various platforms, we continue to see continued revenue and earnings growth ahead as advertisers look to be seen by FB's user base.

And as social-media platforms embrace video, we expect Facebook to be a key beneficiary from the ongoing shift away from TV advertising. We're only in the early innings of that.

Lastly, the stock's technical picture looks promising as well. Add it all up and our price target remains at $225.

This white paper is part of a series of special in-depth reports on the FAANG stocks -- Facebook, Amazon (AMZN) , Apple (AAPL) , Netflix (NFLX) and Google/Alphabet (GOOG) , (GOOGL) . To check out all of the reports in this series, click here.

Chipmaker STMicroelectronics Shows Some Static Ahead of Earnings

STM's charts are a tough read, but let's see what they say when all the pieces are put together.

As We Await Tesla's Results, Let's Assess Whether to Touch Microsoft

Would-be traders and investors need to understand that the software giant's stock isn't cheap by any measure.

It was MSFT guidance that turned the post-closing bell rally into overnight weakness.

The primary issue now is whether MSFT earnings will produce a theme reflected in other reports.