Global infrastructure firm Aecom (ACM)  may be a beneficiary of all the spending that is anticipated in the coming quarters and years. That is the fundamental story, but we we also have to look at the technical story -- the charts and indicators -- to see if the market's fundamental story matches the price action. Let's check the daily, weekly and Point and Figure charts.

In this one-year daily bar chart of ACM, below, we can see a rally until July/August and then a decline until early November. The post-election rally was not confined to banks but infrastructure plays also soared.

ACM rallied from below $27 to over $40 in just a few weeks. There is a bullish but belated golden cross of the 50-day and 200-day moving averages in early December. The On-Balance-Volume (OBV) line rises sharply in November and early December before turning lower. The Moving Average Convergence Divergence (MACD) oscillator looks like it could cross below the zero line for an outright sell signal.

In this first weekly chart of ACM, below, we go back just three years. The overall pattern of prices is sideways but a higher low in October could be the pivot point to an upside breakout. Prices swing above and below the 40-week moving average line. ACM is currently above the rising 40-week line. The weekly OBV line is neutral and the weekly MACD oscillator is crossing to a liquidate longs sell signal.

In this weekly chart we go back five years to get some additional perspective. The three-year chart of ACM looks like a very broad trading range market, but this bigger view shows the price action since November as more of a breakout above $36. Prices are above the rising 40-week moving average line and the pattern going back two years looks like a rounded bottom of sorts.

In this Point and Figure chart of ACM, below, we have manipulated the price data using the Average True Range (ATR). This chart shows a huge base pattern with an upside target around $68. 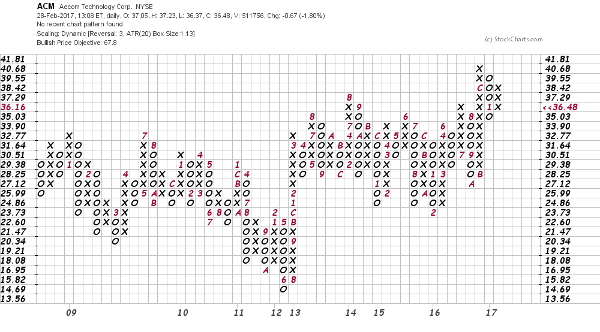