Thanks to online shopping, the landscape for retail has changed forever. Some older companies, like Sears Holdings (SHLD) , have failed to adapt and might never recover. Newer names, like Action Alerts PLUS holding Amazon (AMZN) , have seized the opportunity, capitalizing in ways that were unimaginable just a few years ago.

The ideal scenario for a retailer is to be strong in both the physical and digital worlds. This is exactly what Walmart (WMT) aspires to be, and why Wall Street was disappointed when the company's online sales growth dipped sharply in its most recent quarter.

Today, Macy's (M) demonstrated its prowess in its physical stores when it reported fourth-quarter same-store sales growth of 1.3% vs. estimates of just 0.1%. Macy's also flexed its digital muscles as it reported its 34th consecutive quarter of double-digit online sales growth.

Macy's also has momentum going forward, as it reported 3% same-store sales growth in January. This should assuage any fears that Macy's fourth quarter, in which the company earned $2.82 per share vs. estimates of $2.71, was a one-hit wonder. Instead, we have what could be the beginning of an earnings trend.

Speaking of trends, technically this stock has just broken out of an ascending triangle pattern (dotted lines). The breakout from this bullish pattern places Macy's at a nine-month high. Macy's is pulling away from its 50-day moving average (blue) and its 200-day moving average (red), which has acted as a key support in recent weeks. 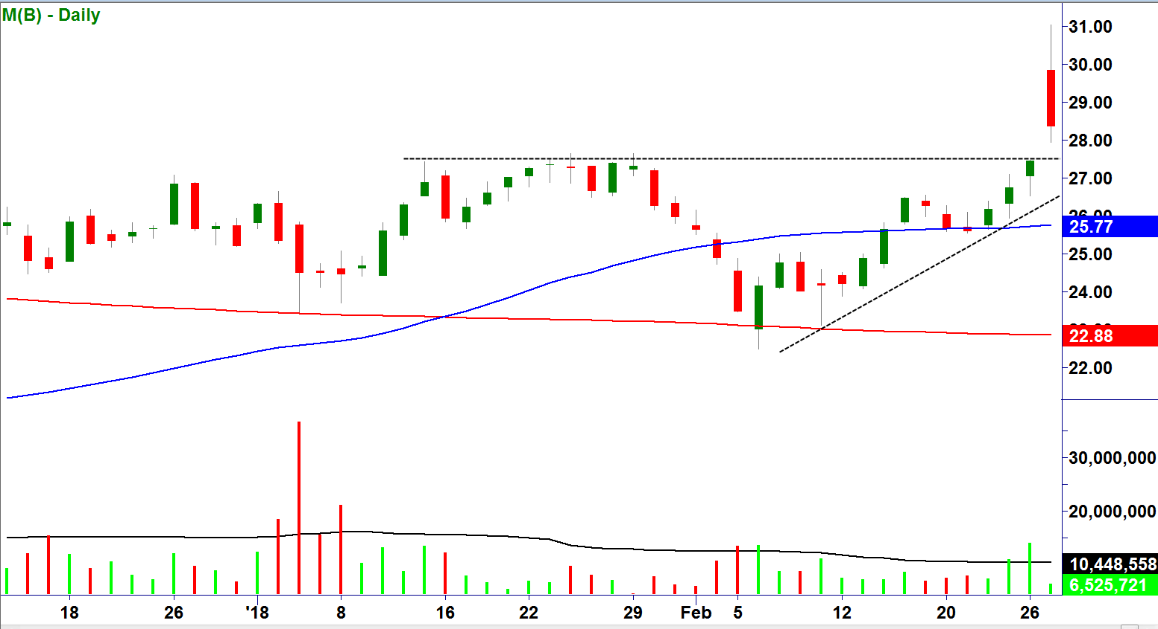 The key for this stock will be to stay above $27.50 (upper dotted line). As long as Macy's can do that, the path of least resistance will be higher.

The transaction was done through Brookfield, and Macy's could do many similar deals in the future. The company is sitting on a gold mine in the form of real estate. Macy's announced last year that it was consulting with Brookfield in an effort to monetize about 50 of its properties.

One of those properties, the Macy's Herald Square location in midtown Manhattan, could be worth billions. Macy's current market capitalization is about $8.75 billion, so the company's real estate holdings could represent a considerable amount of hidden value.

The reason for these transactions is clear: in an increasingly digital world, the need for physical retail space is reduced. Macy's is maintaining its presence at its Chicago location, but it no longer requires 14 floors. Similarly, although I feel certain that there will always be a Macy's at 34th St. and 7th Ave., the company no longer requires a massive square block in the heart of midtown Manhattan. It will be interesting to see how this situation develops.

Get an email alert each time I write an article for Real Money. Click the "+Follow" next to my byline to this article.
TAGS: Investing | U.S. Equity | Real Estate | Consumer Discretionary | E-Commerce

Off to Charleston to Scout Real Estate Opportunities

This city should be a primary beneficiary of the exodus out of the large and high tax places that has accelerated thanks to the pandemic.

A 9% Yield and Growth Never Gets Old

This healthcare REIT is capitalizing on a major trend: the aging U.S. population.

This High-Yield Dividend Aristocrat Is on Sale

In this uncertain climate, real estate investors should focus on high-quality REITs.

A High-Yield REIT With a Secure Dividend

The stock is an attractive option for income investors.