"When you blow away the foam, you get down to the real stuff."

This afternoon former Fed Chair Ben Bernanke will interview former Fed Chair Janet Yellen about her career for the Brookings Institution. The two will take questions from the audience. There is certainly a story here, and the history of central banking, not to mention "the courage" to act in a crisis will be on full display. These two will amount to the proverbial tree in the forest. Market participants will be focused elsewhere. For those moving money, and for those who pay attention when money moves, this interview will likely take on the insignificance of an entertainment industry awards show. Nobody cares. For good reason.

Current Fed Chair Jerome Powell takes the Hill today. His prepared testimony will be released at 08:30 am ET this morning. Ninety minute later, the new chair will sit before the House Financial Services Committee for his inaugural testimony on monetary policy as the central bank's leader. This testimony will go on, and will cover many bases, but as a market participant, there are three things that I want to listen for, and perhaps focus on, as Powell proceeds.

Obviously, his thoughts on consumer level inflation are key. Right now, futures markets are pricing in nearly a two in three chance at three rate hikes this year, but also a roughly 27% chance at four. Powell's thoughts on inflation will be felt here as well as in current Treasury yields. That will also move the needle in equities coming off of two incredibly bullish days.

Jerome Powell's thoughts on inflation will likely be clearly made. My other two areas of focus will be much more difficult to ascertain. I want to know how comfortable the Chair is with the recent spike in market volatility. Volatility in financial markets is normal. However, what we experienced over the past few weeks is not. As the central bank further prepares the normalization of it's own policies, it will be key to understand this non-economist's tolerance for risk. Lastly, how he delivers his message will be part of my focus. This has nothing to do with policy. I just want to see how comfortable this leader appears in his own "new" role. This is the key to the marketplace today.

Morgan Stanley kicked of their Technology, Media & Telecom Conference yesterday. The high profile event will carry on through Thursday. In all more than 250 companies, both public and private are expected to participate in some kind of way. Yesterday, Walt Disney (DIS) CEO Bob Iger presented the firm's views on their "Over the Top" plans for streaming content directly to consumers as a stand alone service. The launch of the much anticipated ESPN Plus service is expected sometime this spring, while the heftier Disney content service that will include original programming could take as much as a year longer. Iger makes clear that this is a focus of the firm in the long term. This is also an item that has my attention long term. I am long the name.

One other name presenting today that could make something of a splash could be Akamai Technologies (AKAM) . Why is that? Akamai for the uninitiated, is a leading cloud delivery service. The firm has over 200K servers in over 130 countries. They're bigger than you thought. They present today at the Palace Hotel in San Francisco at 11:45 am ET. The firm also faces a deadline for nominating dissident director candidates in less than two weeks, as many feel that this firm is undervalued. What does the firm say today in public? Do they even go there? There being the eventual possibility of a corporate breakup. Who did go there was TheStreet's own Ronald Orol ... in depth, yesterday afternoon.

Most of you know that I have been a big promoter of information technology for years now...pretty much ever since the banks stopped working on a higher level for me, forcing not only myself, but much of the marketplace to search for leadership. That leadership had come in the form of the semi-conductor space. I wear quite a few names here. I have long loved Nvidia (NVDA) for their innovation. I mean, who doesn't? I have long loved Intel  (INTC) , not only for their leadership, but for the firm's dividend. I have been in and out of Advanced Micro Devices (AMD) as my appetite for blockchain exposure has evolved, and I have exposed myself to NXP (NXPI) , as that firm's obvious undervaluation was made clear to the marketplace. I have also maintained longs in the wafer crowd, those who provide for the industry, such as (KLAC) , (AMAT) , and (LRCX) .

One name that I have never owned a share of, nor a derivative position in, has been Micron Technology (MU) . Why? No reason, really. Just can't be involved in everything. For that reason, and because the stock's recent range makes it interesting... let's take a look.The stock ran 3% yesterday on news that the firm had made available three new second generation 3D NAND storage products that are intended to support the Universal Flash Storage standard. In plain English, that means they've come up with new technology to help cell phones move forward with such developing technologies as artificial intelligence, virtual reality, and facial recognition. 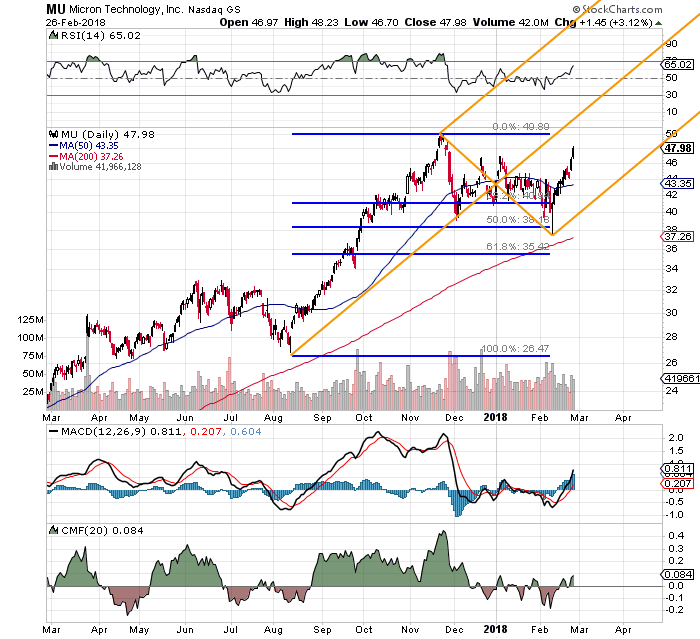 How interesting, and possibly compelling is this chart? Your short-term indicators, such as Relative Strength, the daily MACD, and Money Flow have all turning positive. The entire group has been red hot, so you might take that with a grain of salt. So, let's move on to trend modeling.

Take look at the Fib levels (blue). Beginning with the August lows, and running through the late November highs, this stock found both significant support at the 38.2% retracement level as well as ultimate support during the flash correction just below a 50% retracement. I find this incredibly positive. I also find this highly indicative of a stock being priced by algorithmic traders, which in theory makes the stock much more predictable, and activity by sentient beings less detectable.

Though the stock is nearing the $50 level that has presented as resistance in the past, the Pitchfork model allows for rising resistance that could provide a pricing range of 48 to 60 by April. Promises? Not here. Educated opinion? Yeah, we can do that.

(Option)al: As of last night you could still get 60 cents for 47.50 puts expiring this Friday. 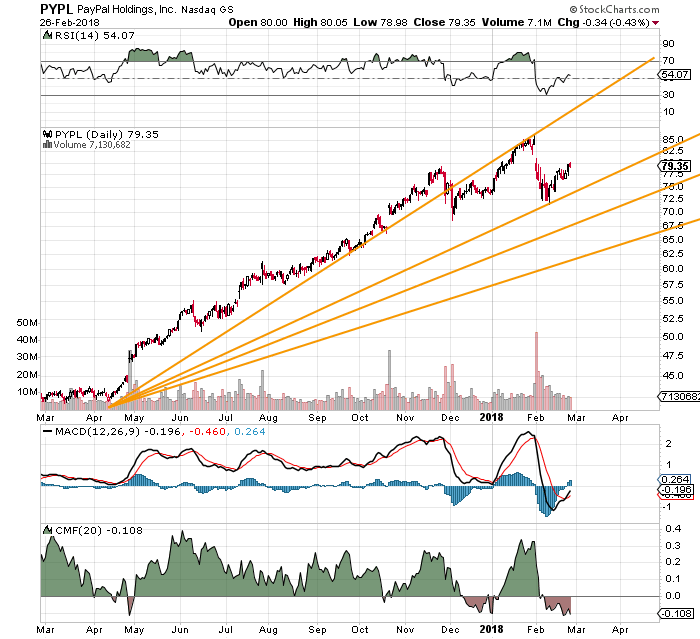 At first glance, just looking at a naked chart, PayPal (PYPL) looks to have broken trend. Relative Strength, Money Flow, the daily MACD, all took a nasty dive, but from lofty levels. Is PayPal still the future of payment technology? Has the firm's direction been altered by the increasing development of various blockchain start-ups?

The truth is that PayPal is not broken. At least not yet. For this one, I have only displayed a Fibonacci Fan as I feel it best explains what I see. The support off of the market wide Flash correction came where? That's right at a 38.2% retracement off of trend. This is getting repetitive. Bring back the humans!! I would think for those long the name, that the trend remains in tact as long as this line remains unmolested. Even then, your rising line od secondary support should arise as high as 72.50 well into the spring. As long as tech stays hot, $90 is not at all unrealistic for this name.

Get an email alert each time I write an article for Real Money. Click the "+Follow" next to my byline to this article.
TAGS: Investing | U.S. Equity | Consumer Discretionary | Technology | Telecom Services | Stocks

Shares of the maker of solid-state batteries point could weaken further based on its technical signals.