Sanofi (SNY) has been trading sideways the past twelve months, but stronger price action since October has turned a neutral chart positive. Aggressive investors should buy an initial position now and increase holdings on strength.

The On-Balance-Volume (OBV) line behaves in a similar way, with an irregular decline until an October nadir and a rough improvement since. Ditto for the Moving Average Convergence Divergence (MACD) oscillator, which spends more time below the zero line until November.

In this three-year weekly chart of SNY, above, we can see a downtrend from late 2014 until early 2016. Since early 2016, the price of SNY has traded sideways. The slope of the 40-week moving average has changed from down to sideways -- and shows just a slight "uptick" now.

The weekly OBV line shows a rising trend over the past year -- different and more bullish than the daily OBV line. The MACD oscillator gave a cover-shorts buy signal in March and October, and just now moved above the zero line for an outright go-long signal. 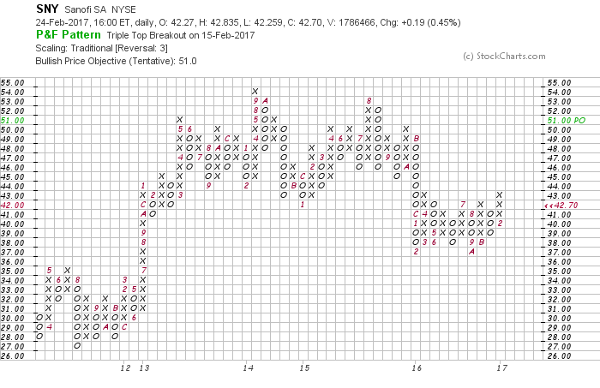 In this Point and Figure chart of SNY, above, we can see the price action in a different way, filtering out small jiggles -- or noise. The sideways price pattern of 2016 can be seen from $37 to $42, and the recent entry on the chart at $43 is a breakout. Counting the columns across the base and projecting it upwards gives us a $51 potential price target.

Bottom line: SNY has become much stronger since late October. A gap below the market may not get filled, so traders and investors should look to buy SNY here and above $44, risking below $40.50. $51 is our upside price target.