This commentary originally appeared on Real Money Pro at 10:00 a.m. ET on Feb. 27. Click here to learn about this dynamic market information service for active traders.

Thursday, Feb. 23 saw one of the craziest selloffs ever. From 3:30 p.m. through the market's close, shares of almost every retailer plunged in unison. They simply fell off a cliff as some specialized mutual fund, ETF, or large money manager decided that the proposed "border adjustment tax" would cripple the industry.

The five-day charts shown below are merely examples of the indiscriminate carnage that took place late that day. 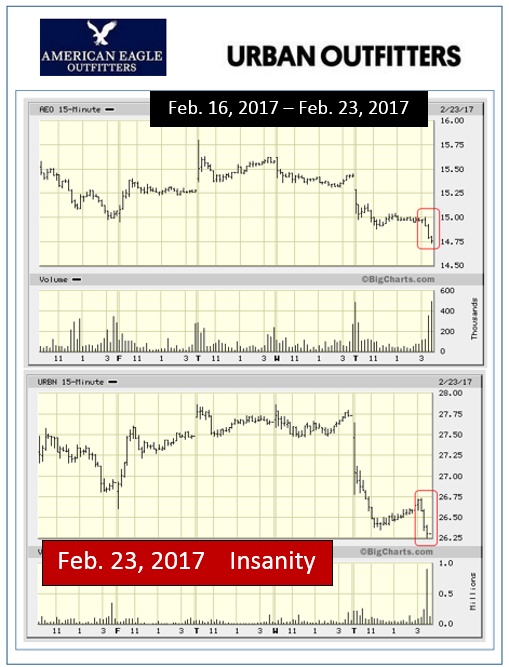 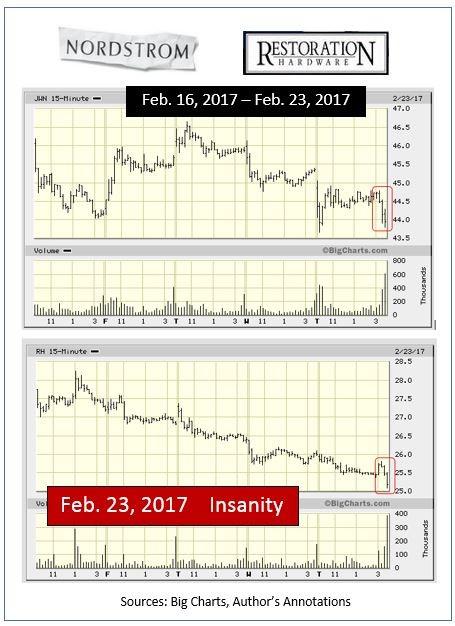 There was no company-specific news on any of those stocks prior to 4 p.m. Restoration Hardware  (RH)  and Nordstrom  (JWN)  did report earnings after the close. Both beat analyst estimates.

Is retail really dead? Probably not, based on actual reported results. All four of the stocks highlighted here (RH, JWN, Urban Outfitters  (URBN)  and American Eagle Outfitters  (AEO)  ) were posting nice rebounds on Friday. Their mid-afternoon prices are shown below.

RH, in particular, truly punished anyone that had been silly enough to have shorted it.

Channeling the man in the Dos Equis ads, I don't always trade during pre-market hours, but when I do, it's always to go counter to the crowd. Thursday afternoon's retail plunge left many of those stocks at bargain valuations.

With everybody nervous and anxious to get out, I was able to buy more than 2,200 shares of AEO pre-market on Friday at $14.65, even cheaper than its previous day's final price. Why was I willing to purchase without knowing the eventual opening quote? The $14.65 "ask" seemed like a great price. It was one I was satisfied with and happy to lock in. 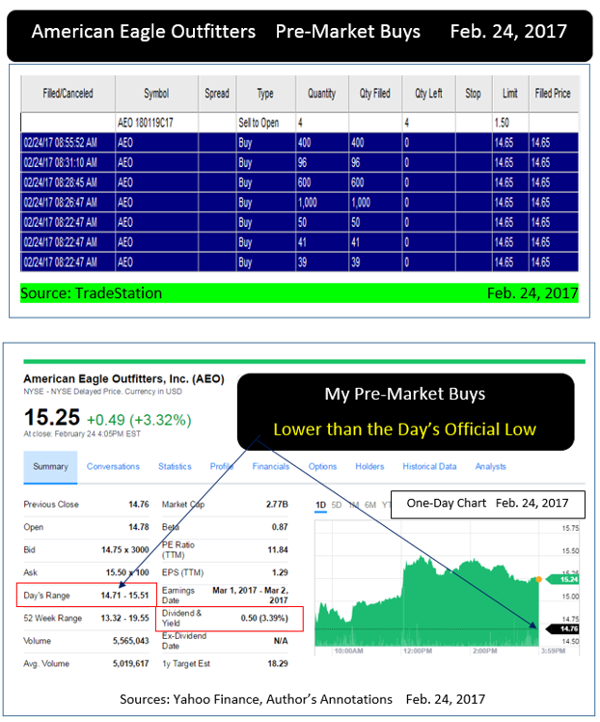 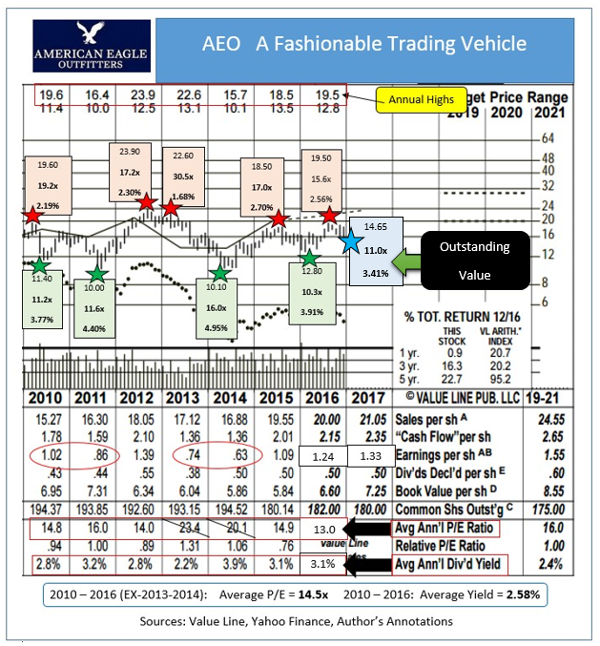 Urban Outfitters offered a similar value proposition last Friday. At $26.30 per share it fetched just 13.3x its FY 2017 earnings per share estimate of $1.98. That compares quite favorably with the stock's average P/E of 14.5x.

Since 2009, URBN was only available just once at a cheaper forward P/E multiple. Buyers in late 2015 through early 2016 got the opportunity to exit at double their entry points, less than a year later. 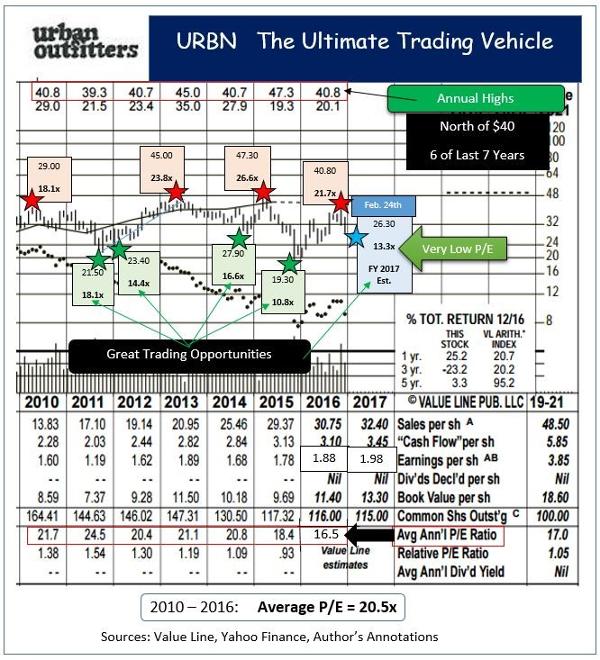 Still not ready to own these? Consider selling long-term, out-of-the-money puts. The option premiums are so juicy that break-even prices (where the shares would need to be purchased if exercised) already discount bear market movements. 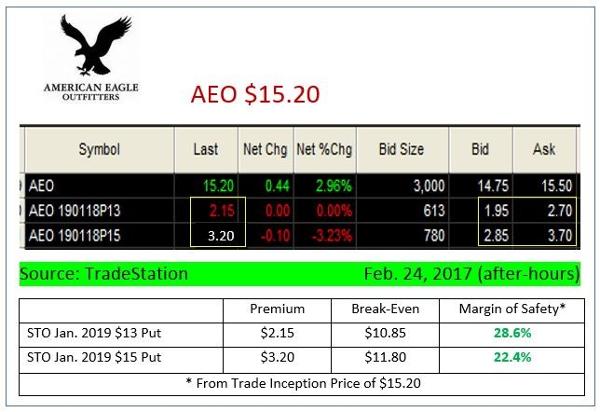 The if exercised price on URBN's $23 strike put would have been no worse than neutral for option writers dating back all the way to the latter part of 2009; $19.30 is lower than the lows set during seven of the past eight years, including 2017 year to date. 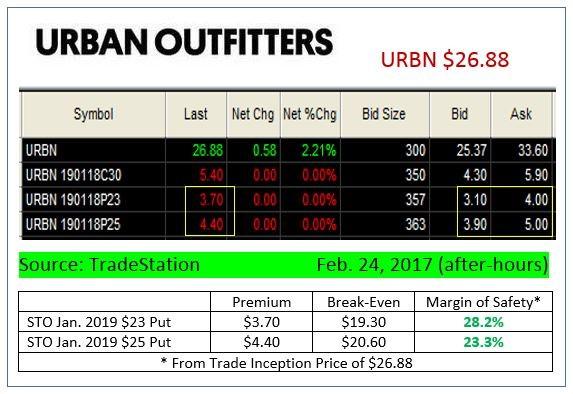 Upside has been well-defined. URBN carved out peak prices of $40 and above during six of the past seven years. The other year? It touched only $39.30.

Amazon  (AMZN)  is never going to garner all apparel sales. People like to touch things, try them on and have a local shop to easily return unwanted items.

Buy AEO and URBN shares. Sell their puts. Then remain ready to book profits on their inevitable next runs to fully valued territory.

Get an email alert each time I write an article for Real Money. Click the "+Follow" next to my byline to this article.
TAGS: Investing | U.S. Equity | Consumer Discretionary | Technology | Markets | Short-selling | Stocks