AstraZeneca  (AZN) has seen some concerted buying in the past three months.

While a bigger base pattern would be nice, it looks like AZN is ready to break a downtrend from 2014 and could move up to the mid-$30s in the months ahead.

In this one-year daily bar chart of AZN, above, we can see that declines to and below $27 have been bought since June. While the slope of the 200-day moving average line is still bearish, the 50-day moving average line has been more responsive and has turned up. The volume has been fairly heavy since November and the On-Balance-Volume (OBV) line has turned up, signaling more aggressive buying. The Moving Average Convergence Divergence (MACD) oscillator moved above the zero line in January for an outright go-long signal.

In this three-year weekly chart of AZN, above, we can see how well the slope of the 40-week moving average line has defined the decline the past three years. If we can ignore the rally to $35 in 2016, the downtrend looks even better. Since November, AZN has not made a lower low, which is a start to a turnaround. Prices are a fraction below the 40-week moving average line and could close above it this week. The On-Balance-Volume (OBV) line made its low in March on this weekly timeframe and the MACD oscillator crossed to a fresh cover-shorts buy signal. 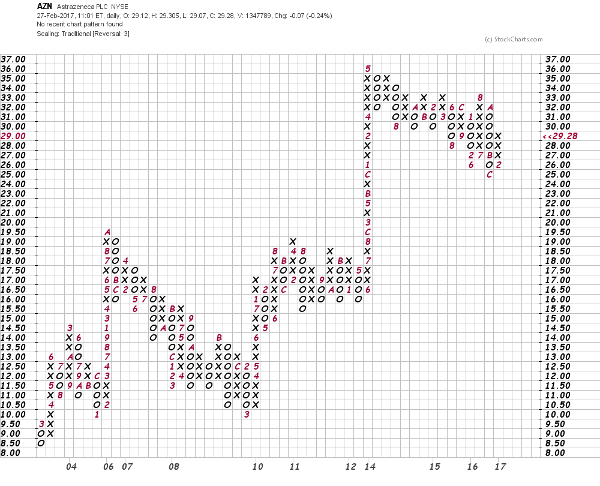 This Point and Figure chart, above, shows AZN is still correcting. A rally to $34 looks like it will produce a breakout on this chart.

Bottom line: The old saying that volume precedes price could be playing out on AZN as the OBV line has turned up, but the price of AZN is still below the declining 200-day moving average line. AZN may see more sideways price action around the $29 level, but it looks like a close above $30 and the 200-day average line is coming. I would trade AZN from the long side, risking below $27.50.