"The energy of the mind is the essence of life." -- Aristotle

What does it say about my portfolio when Warren Buffett, the "Oracle of Omaha," said over the weekend in his annual letter to shareholders of his Berkshire Hathaway (BRK.A) , (BRK.B) that the firm's cash hoard has been building.

Building? Yes -- because, to put it simply, Buffett just couldn't find acquisition-worthy targets. Think about it. What does that say about your portfolio, or for that matter, any net long portfolio? (Psst, that's most of us.)

What should Berkshire do with this growing bundle of cash (which is set to grow even faster under the new U.S. corporate-tax laws)? If the firm expects to implement a dividend or reward shareholders in some creative way, Buffett didn't mention that in his letter. The annual shareholders' meeting is scheduled for May 20 in Omaha; maybe he'll explain then.

In the meantime, The Oracle did warn investors against paying up for less-than-optimal performance, and also made plain that he still favors equities in general over debt for long-term investors, despite volatility's recent rise.

Is Buffett always right? Of course not, nobody is. That said, his common-sense approach to investing in a fundamentally sound way has produced envious results over many decades.

But I decided just last year to take the other side of a Buffett trade (sort of) when news broke that Berkshire had exited the firm's holding in General Electric (GE) . Easy money, it seemed. A big seller like Buffett removed from the price-discovery mechanism ... what could go wrong with that?

Of course, that story hasn't played out so well for General Electric, nor for shareholders like me. In fact, it's taken all of my management skills just to knock my net basis on GE down below $18.50 from where I initiated my foolhardy position in the mid $20s.

Did I really think I was smarter than Buffett? Was I really that stupid? The answers are: 1) I hope not, and 2) yes.

The only good news is that I can enjoy the challenge of managing from behind, and the exhilaration that comes with turning something like my GE stake around. Are you dancing around with anything ugly like GE in your book? If you're still skating with your head down, then you're going to have to learn the risk and rewards of the options game.

The Point and The Paradox

Buffett also used this year's shareholder letter to lay out that the qualities that he looks for when pursuing new ownership of a previously independent business entity.

For openers, the Oracle wrote that he values able management. Who doesn't? Fortunately, there are many firms across Corporate America that might be considered well-managed after a decade of budgetary belt-tightening.

Buffett also wrote that he seeks good returns on tangibles assets and the opportunity for a firm to grow internally. But what stopped Berkshire from stepping to the plate in a big way in 2017? "A sensible purchase price," according to the Oracle.

Going back to my original thought, does this imply an overvalued marketplace? That would seem to be the case on the surface, but on further review, I see this another way. Perhaps those able managers simply weren't willing to sell fundamentally sound businesses on the cheap in a rapidly rising marketplace.

In the meantime, Berkshire's cash pile builds. And according to the firm's recent 13-F, so do the number of shares of Apple (APPL) that Berkshire holds on its books.

That's the company with perhaps the greatest service-environment setup of all time, with or without a super cycle. In fact, Apple is the one stock where I greatly considered taking a profit ... until I saw that the Oracle had taken a bigger bite of it.

Has Walmart Bottomed Out?

You might recall that day in mid-January when Walmart (WMT) announced both layoffs and entry-level wage increases on the same day. I was interviewed on CNBC regarding the news and announced that I had sold much of my stake in anger because a number of employees had seemingly been terminated without notice. They reportedly found out only when denied access to their now-closed stores.

Walmart stock went higher after that, hitting $109.98 before January's end. Maybe I looked a little foolish, but I didn't care. After all, I've been (and in many ways still am) a little guy. Those are my people, and that day I was ticked off.

The real question now is: "Is Walmart safe here?" Well, did you listen to the call or read the transcript? There was no mention of going out of business, although markets acted like there was.

Chart of the Day 1: Walmart 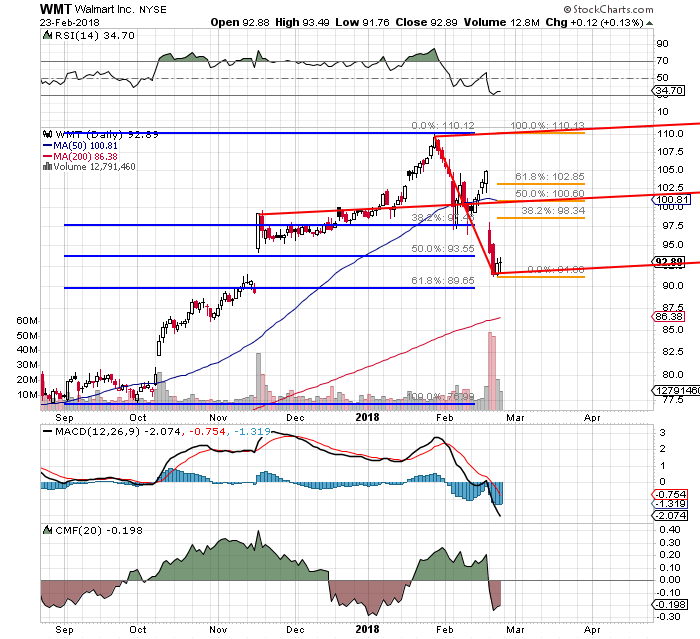 Yet I feel that the name might have reached a short-term bottom. After Walmart took off in late September and ran through to those late January highs, the stock's recent plunge took it very close to a 61.8% retracement.

Now, the pitchfork pattern above is a little awkward, but starting the model above prior to Walmart's mid-November spike could have warped the results, as sentiment clearly changed at that point.

You can see the technical sell-off prior to earnings looks to have been caught by the central trend line, with an attempt at pre-earnings support made there. You see another plunge following the earnings report's release, but you don't see a broken pitchfork, do you?

If my model above is valid, Walmart's new target price would be $98, as that would be a 38.2% retracement of the stock's recent beat-down. My position is still small in this name, but I'm extremely likely to start rebuilding my long at these prices after this column has been public for several hours.

Most of you have already realized this on your own, but I think it's worth mentioning that with Friday afternoon's rally, the S&P 500 closed at an incredibly crucial spot on the charts: 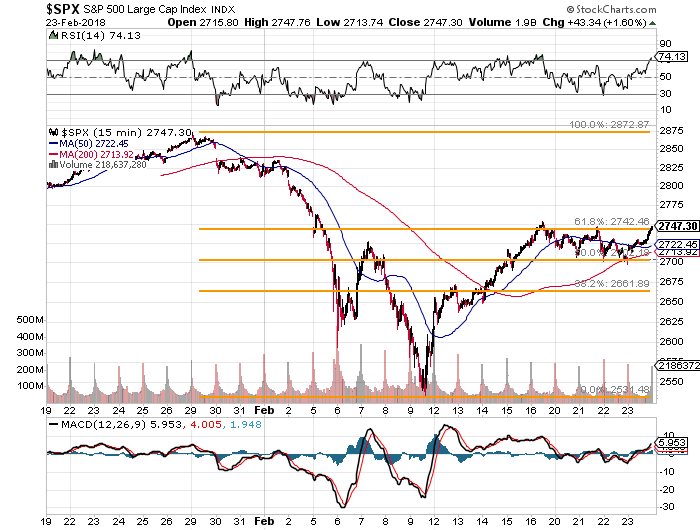 Since the index's recent volatility-enforced flash correction, the S&P 500 has been repelled at a 61.8% retracement of that sharp sell-off three times now. The index also found support at the 50% retracement line three times as well.

There's is a real chance for a mover higher here if Treasury yields and dollar valuations behave. But what I'd ideally like to see would be not just a spike above Friday's close, but to see the spot tested from above and survive. That's what would get this kid fired up.