(This commentary originally appeared on Real Money Pro on Friday. Click here to learn about this dynamic market information service for active traders.)

The markets are off to a great start in 2017, but not every stock is participating in the rally. Despite a series of all-time highs from the major indices, telecommunications giant Verizon Communications (VZ) has fallen by 5.75% year-to-date. Verizon is facing tough competition from T-Mobile (TMUS) , which has gained market share via an aggressive pricing strategy.

While Verizon is off to a rough start in 2017, the stock is now showing positive signs for the first time in months. First, Verizon has closed higher for five consecutive sessions (circled). Second, four of those five sessions occurred on above-average volume (shaded yellow). Third, the stock kicked off those five sessions with a buy signal from its Moving Average Convergence Divergence indicator on Feb. 16 (arrow). It seems that Verizon has finally snapped out of its doldrums and found some buyers. 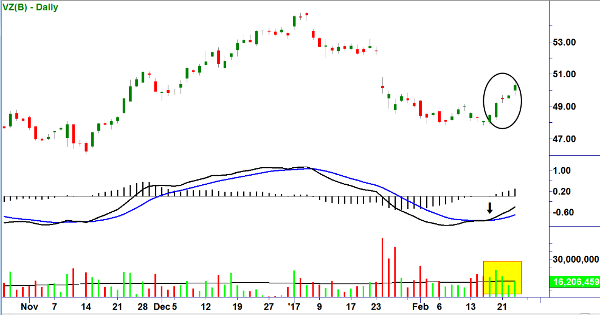 Next, we'll take a look at T-Mobile, which is chugging steadily higher within a bullish channel. This stock has good support at the lower end of its channel, which is reinforced by its 50-day moving average (blue). T-Mobile has shown a tendency to rise on high volume (green bars) and fall on lighter volume (red bars), which is a positive sign.

T-Mobile has the look of a classic momentum play; short-term traders will probably buy the dips and hang on. One strategy would be to hold the stock until it closes below its 50-day moving average (blue). 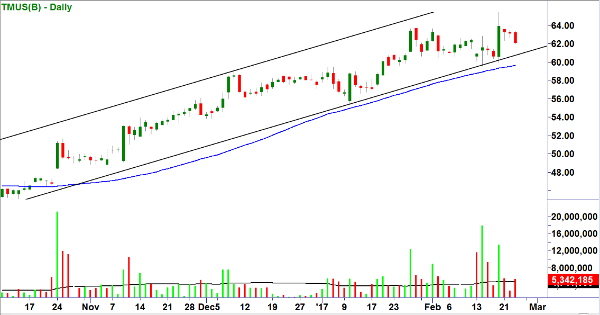 There is widespread speculation that T-Mobile could merge with competitor Sprint (S) . The topic of a T-Mobile/Sprint merger has already been thoroughly covered by several Real Money columnists, particularly Eric Jhonsa.

However, I'd be very careful with Sprint. First, the stock has already gained over 40% since the U.S. Presidential election, so a potential merger may already be reflected in its price.

Second, note the dramatic divergence between Sprint's price (green line) and its MACD indicator (red line). This condition is known as bearish MACD divergence. According to theory, the price should follow the indicator lower. Sprint's MACD is also on the verge of flashing a sell signal (shaded yellow). 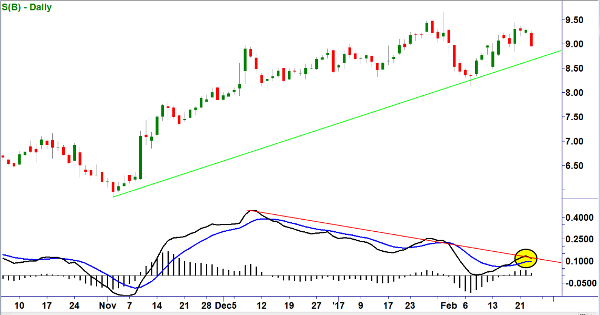 Also, if you're worried about a market downturn, Verizon boasts a 4.59% dividend yield. That should help cushion the blow in the event of a selloff. Meanwhile, T-Mobile pays no dividend.

On a risk-reward basis, Verizon looks good here. The stock has an inexpensive valuation and an attractive dividend. Verizon is well off of its highs and is gaining upside momentum, so I'm initiating a long position.

Get an email alert each time I write an article for Real Money. Click the "+Follow" next to my byline to this article.
TAGS: Investing | U.S. Equity | Technology | Telecom Services

The Picture Gets Clearer on Zoom, So Don't Hang Up Yet

ZM could resume its advance after some further consolidation, according to the charts.

Apple is showing its technical leadership on the short-term charts, and looks like it can turn a little faster than the broader market.

Is PagerDuty Off Duty?

Eyeing DocuSign? Read the Fine Print (on the Charts) First

DOCU is soaring in advance of reporting earnings this week, but here's what investors should consider.

Zoom's Mixed Charts Ahead of Earnings Suggest a Cautionary Stance