The indices have gone almost straight up so far in 2017 and I've complained quite often about the lack of prudent entry points. In general, I'd rather not buy stocks that have gone up every day for weeks. While momentum does tend to last longer and go further than seems reasonable to most people, the odds of a reversal increase the more extended a chart becomes.

There is one circumstance I have found more favorable to the chase trade and that is when there is a big move triggered by very good news, such as exceptional earnings. The typical reaction of many traders when a stock gaps up 10% or more on strong news is that they have missed the trade. That is always my first thought when I see a stock that is at highs and appears extended.

What favors a chase when there is surprise news is that the market normally does not efficiently price in the news. Forget the efficient-market theory taught in business school. The truth is that the market struggles to calculate the value of a major surge in earnings and estimates.

Analysts will almost always move incrementally when they are presented with a big report and raised estimates. They don't want to be too optimistic right away. It is far better for their credibility to raise estimates gradually rather than raise them too much and then cut them back.

Another factor that favors the chase trade on good earnings news is that the stock will benefit not only from the higher EPS numbers but it may also see expansion in its P/E ratio. It is the P/E expansion on top of the increased earnings estimates that can really ignite a stock.

This past week, I mentioned Ultra Clean Holdings (UCTT) as a stock that I was willing to chase following its earnings report. On Wednesday night, the company posted fourth-quarter earnings of $0.36 per share, which beat estimates by $0.09 and compared to a loss of $0.01 last year. Revenues grew 69% year over year. The company raised its guidance for first-quarter earnings to $0.40-$0.45 from $0.27. Analysts raised estimates for 2017 to $1.21 from $0.86 following the news. With a trailing P/E of just 20, the stock trades at a very low multiple relative to growth, although the semiconductor sector is cyclical and typically trades with lower P/Es. One analyst at Craig-Hallum has raised his target for the stock to $20 from $14.

If the market doesn't collapse and take the technology sector, there is a good chance this stock has some decent upside potential. It closed around $14 yesterday following the earnings news. So how do we approach this trade?

The first step is to establish a toehold. Make a small initial buy and put it on your radar. It is important to make an actual buy rather than just watch because that helps establish your emotional commitment to the trade. You are much more likely to follow the stock more carefully if there is money on the line.

The second step will be looking for additional entry points. This is often driven by overall market conditions. If conditions are weak, there will be an opportunity to add to a position at lower prices, and if momentum is running strong you may be required to average up. Regardless of how you approach the add points, it is important to have some risk parameters in place where you will cut back your exposure if losses grow too much. I typically will make partial sells at stop points and then will consider rebuying if the price action improves.

The overall goal is to buy incrementally as the market prices the stock more efficiently. It works well when there is a large surprise and it takes a while for the market to fully appreciate it.

Chasing a stock following very good news gives you the opportunity to be aggressive in seeking gains if you do it right. 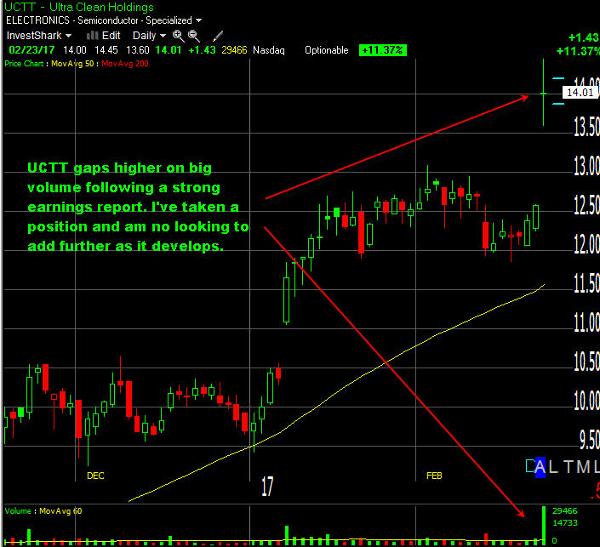 This is the right kind of alignment we like to see with prices and moving averages.

Traders Could Use a Break From Historic Levels of Market Inconsistency

The hundreds upon hundreds of issues trading at their 12-month lows isn't inspiring confidence despite the major indexes sitting near record highs.