Six Flags Entertainment (SIX) did not stomach well its fourth-quarter numbers Wednesday, making a large outside day and lower close. Traders may have preferred one of their white knuckle rides over yesterday's reversal price action.

SIX made a strong rally from its September low but the ride may be over for now. Let's look at the charts and indicators.

In this one-year daily chart of SIX, below, we can see some roller-coaster price action. A spike to the upside in April. A rapid selloff from late July to early September followed by a cog-tram rally from $48 to $62.

The 50-day and 200-day moving averages performed poorly in these circumstances with a late death cross in early September and a late golden cross in December. The volume pattern has been a problem for chart readers since October. The pace of trading slowed from October through January reminding me of a rising wedge formation. The On-Balance-Volume (OBV) line did not bottom until mid-November and has only made a slow recovery telling us that buying has not been all that aggressive. The volume of trading looks like it has picked up in February, but that could be due to increased price volatility.

In the lower panel is the 12-day momentum study which diverged bearishly from the price action from November to February -- prices went up but at a slower and slower pace.

In this three-year weekly chart of SIX, above, we can see that prices are above the rising 40-week moving average line. With two more days to go in the week we can see what could become a weekly outside move and lower close. The weekly pattern of volume has slowed from the 2016 price low and the weekly OBV line is pointed lower from a significantly lower peak. The Moving Average Convergence Divergence (MACD) oscillator is close to a crossover and liquidate longs sell signal.

In this longer-term Point and Figure chart of SIX, below, we can see the great comeback the stock made over the years. More recently, we can see the sharp rally (column of Xs) and the recent down move (column of Os). Prices could decline to the $57-$56 area before finding support. 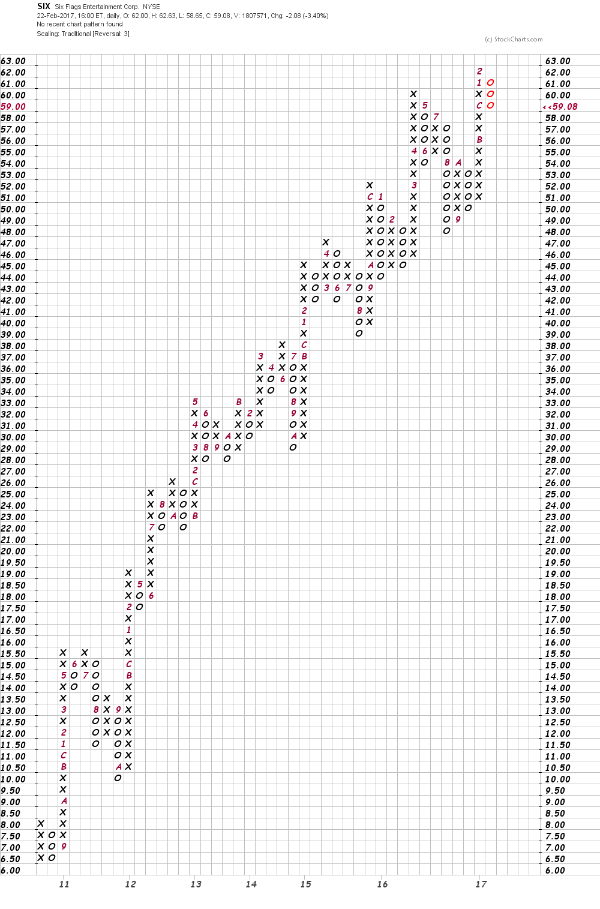 Bottom line: Some people are afraid of rides (me) and some people cannot wait to sit upfront and scream (my grandchildren). When it comes to charts I also try to exercise caution. The big outside day and lower close for SIX Wednesday makes me cautious of entering the long side. I want to see where and if new buyers emerge. The shrinking volume pattern since October should not be ignored.

Get an email alert each time I write an article for Real Money. Click the "+Follow" next to my byline to this article.
TAGS: Investing | U.S. Equity | Consumer Discretionary | Earnings | Entertainment