We last covered L Brands (LB)  , parent company of Victoria's Secret, on Nov. 14 when we concluded, "Unless LB can push up through overhead resistance, the more likely path will probably be further weakness toward $60."

Three months later and we can see LB was weaker than we thought in November. Let's take a look at our updated charts for where we go from here.

In this one-year bar chart of LB, above, we can see a November bounce in LB fizzled by mid-December, and by early January prices were retesting LB's May low. In the past few weeks, LB has inched lower and today we saw a more dramatic sign of selling with a gap to the downside. Prices have been below the declining 50-day and 200-day moving averages since December. The On-Balance-Volume (OBV) line has not shown any signs of aggressive buying to stem the slide. The 12-day momentum study has made higher lows since early January, but this bullish divergence failed to generate a rally.

In this five-year weekly chart of LB, above, we can see how effective the slope of the 40-week moving average line was during the rally and unfortunately how effective it has been on the decline. The weekly OBV line has been weak and the MACD oscillator is in a bearish configuration below the zero line. LB is testing old resistance in the $50-$45 area. 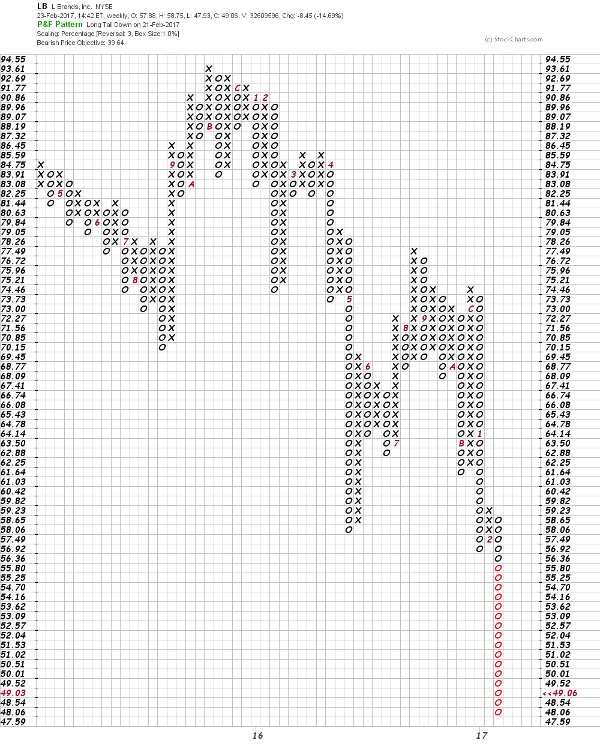 In this Point and Figure chart of LB, above, we can see the sharp decline and the possible downside target in the $40 area. More than half off its zenith.