Jack in the Box (JACK) had a rude awaking today with its sharp gap to the downside. A break below the 200-day moving average line and a serious test of the lower end of a support zone does not bode well.

Let's examine the charts and see if we can put together a workable strategy.

In this one-year daily bar chart of JACK, below, there are a number of gaps to the upside -- we don't mind gaps in the direction of the trend, especially when it is an uptrend. The problem is when prices stall or top and then a stock gaps lower, trapping longs above the market. In this case there are probably traders and investors long JACK above $105. Let's look a little closer to the indicators before this skid.

In January and February it looks like buyers are interested in JACK just above the $105 level. Prices close below the rising 50-day moving average line and then the line peaks and turns lower. The On-Balance-Volume (OBV) line looks like it peaks in December and works lower even as prices move sideways. A weakening OBV line suggests that sellers have become more aggressive with heavier trading volume happening on days when JACK has closed lower.

In the bottom panel is the trend-following Moving Average Convergence Divergence (MACD) oscillator, which gave us a liquidate longs signal in mid-December and just moved below the zero line for an outright sell signal.

Looking at the three-year weekly chart, below, we do not have the latest price action, which would put JACK below the rising 40-week moving average line. The last time JACK broke below the 40-week average in the middle of 2015 the result was swift. The weekly On-Balance-Volume (OBV) line moved higher from March 2016 but looks like it leveled off recently. The weekly MACD oscillator is pointing lower from a liquidate longs sell signal.

In this Point and Figure chart of JACK, below, we can see the straight line decline (a column of Os). A Point and Figure chart does not show gaps. This kind of chart suggests that JACK might encounter support around $91 but there are no guarantees and there is a possible downside price target of $75, which would be pretty drastic. 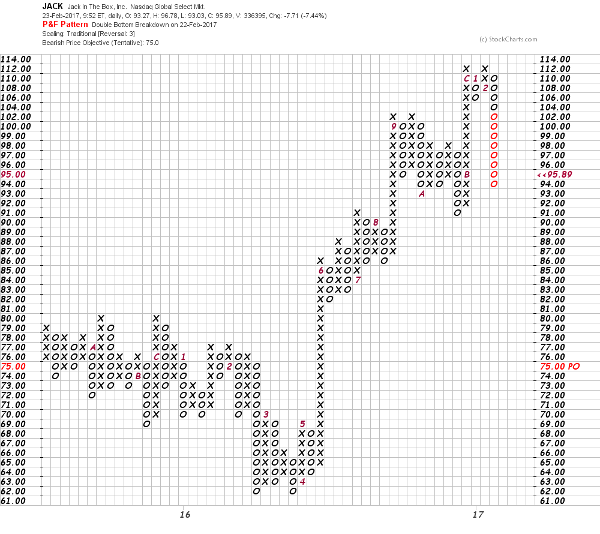 Bottom line: I would not be in a rush to catch a falling knife. I think JACK could find support in the $90-$85 area but it remains to be seen if someone steps up to the plate, so to speak.

Get an email alert each time I write an article for Real Money. Click the "+Follow" next to my byline to this article.
TAGS: Investing | U.S. Equity | Consumer Discretionary | Consumer Staples | Earnings