Roku (ROKU) delivered another strong quarter Wednesday night, beating estimates on both the top and bottom line for the fourth quarter of 2017. The company reported a surprise profit of $0.06 per share when expectations were for a loss of $0.10 per share. Revenue of $188.3 million in the fourth quarter helped drive the beat. However, the shares traded lower by some 20%+ after the close last night and in the premarket Thursday morning, likely due to Roku's guidance.

The company expects full-year 2018 revenue of $600 million-$690 million versus estimates of $661.5 million. That puts the $645 million mid-point shy of expectations. Unfortunately, Roku can't simply pinpoint next quarter as soft and speak upbeat about the remainder of the year. The first quarter of 2018 holds expectations of $131.7 million in revenue but the company projects $120 million-$130 million in revenue.

Given Roku's track record, it will likely squeeze past its own estimates, but the guidance is enough to give momentum players a pause. Furthermore, the company guided for a first-quarter adjusted EBITDA loss of $10 million-$16 million. Over the past five reports, Roku hasn't reported a loss greater than $9.632 million on an adjusted EBITDA basis.

The big push for Roku is its Platform. As an operating system, margins are fantastic and the company enjoys strong ad revenue. Roku posted 129% year-over-year top-line growth in Platform revenue.

The Roku Player, however, is a true loss leader. Revenue was actually down 7% from a year ago while the cost of that revenue was only down 1%. The company acknowledges the Player as a loss leader, but the concerns become how quickly will it slow and how much will it drag the bottom line. Gross margins for the Roku Player dropped from 14.3% a year ago to 9.5% in the fourth quarter.

Fortunately, the Platform gross margins are strong, at 74.6%, but those are also lower by almost 300 basis points from a year earlier. Still, the shift to a significantly higher-margin revenue generator like the Platform is a major boost for long-term sustainability.

Average revenue per user jumped to $13.78 in the fourth quarter, an increase of 48% year over year. Given the shift from low-margin Player revenue to higher-margin Platform, this is to be expected. Active accounts continued a consistent move higher as well as the total hours streamed.

With the move away from Roku Player as the main driver of revenue, Roku will be more dependent on smart TVs, including its operating system (OS) as a standard. Currently, they are included with Phillips, Magnavox, and Funai Electric. While I'd like to see Samsung or LG on the list, it is reassuring to jump on Amazon and see the top-two selling smart TVs are Roku-based TVs. You'll also find those two listed in the most popular "best of" lists. Bulls will want to see that number expand or the number of manufacturers expand. That's a key metric moving forward.

Roku wants to develop a home entertainment network. Unfortunately, after digging deep into smart-home companies as well as knowing what Amazon (AMZN) , Apple (AAPL) , and Alphabet (GOOGL) offer in the way of Alexa and Echo and HomePod and Google Assistant (also Nest), I think Roku is going to find it a hard sell to make the TV the center of an entertainment network. With all the smart capabilities out there, it is more of an accessory.

I'd prefer to see the company focus on "smart" advertising. Advertisers having the ability to reach who they want, when they want, and see the results is a huge selling point. They are basically on the brink of this now, and able to hit closely on the idea. 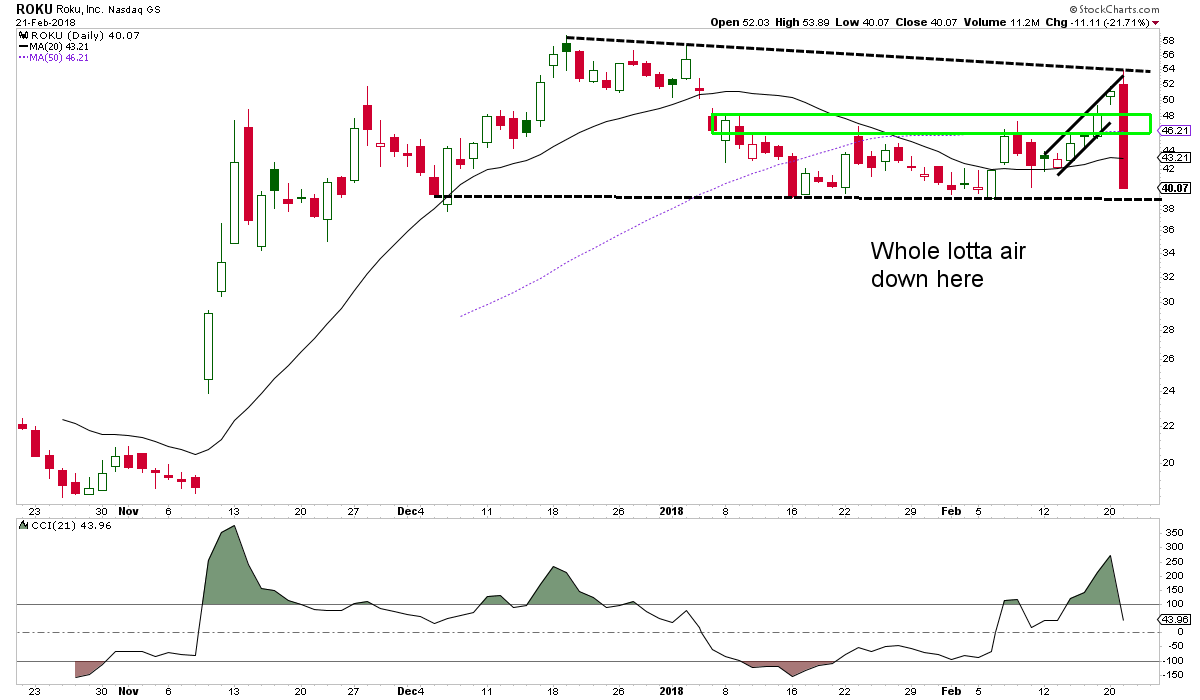 From a technical perspective (see above), Roku shares had appeared to run too far too fast. I underestimated how high they could move last quarter, but the after-hours move back down to $40 resets ROKU to the lower half of a wide trading range that began shortly after the last earnings report.

The risk here is a close under $38. There's little support due to the meteoric rise in November. What that means is basically everyone who has bought the stock in the past three months (before today) will be in a losing position on the shares they hold. It doesn't mean everyone will be or some haven't taken profits, but for any new shareholders going back to mid-November, the current open portion of their position will be flat or in the red. That can make for a lot of traders looking to exit breakeven on any bounce or in a rush to cut losses.

If you are buying the $40 area just know your risk will accelerate on a close below $38. I would look to $46 as an area to take partial profits if buying the dip, but adhere to that stop closely.

Overall, I came away from the report believing the selloff is likely deserved, but that in the long run Roku still sits in solid shape. I'd prefer the company not to focus too much R&D expenditures on the home network concept and instead on the OS (operating system) development for smart TVs. Maintaining a lead position and getting its Platform in as many televisions as possible is paramount to pushing its advertising strategy.

A close over $42 should be enough to develop a $38-46 trading range for the next few weeks, but Roku is a momentum name, so if the market falters, I expect bears (shorts) to really press the $38 level looking for a break.

I am not a buyer on this dip, but I will watch closely to see if the $38 support level holds. I would consider selling out-of-the-money puts with a net entry target of $33-34 on the put sale going out no longer than April in terms of expiration.

Get an email alert each time I write an article for Real Money. Click the "+Follow" next to my byline to this article.
TAGS: Investing | U.S. Equity | Technology | Earnings | How-to | Options