By Chris Versace and Robert Lang

That's why we give AMZN at $1,750 price target (18% above Wednesday's close) in TheStreet's Trifecta Stocks model portfolio, which we co-manage. And one of us (Chris Versace) even made Amazon his top stock pick for 2018.

One of the core theses behind our support for the stock is consumers' ever-accelerating shift toward digital commerce. This is something that was not only evident during the 2017 holiday-shopping season, but that we also see month after month in the U.S. Census Bureau's retail-sales report.

The key for Amazon has been its Amazon Prime service, which dramatically reduced the "friction" of digital shopping. But as we've come to expect from Amazon, the company isn't one to rest on its laurels. Instead, it's continuously expanding Amazon Prime's reach both geographically and in product-offering terms.

Part of this expansion includes leveraging Amazon Prime with other AMZN assets like Prime Video, Pay with Amazon and the like. This not only makes Amazon a "sticky" service, but means it's more of a consumer digital platform rather than just an online-shopping site.

Meanwhile, Alexa -- Amazon's "skunk works" voice digital assistant -- is expanding the company's reach as an increasingly preferred toll for search, shopping and entertainment across a growing number devices (including TVs and even cars).

Part of the company's strategy has also been to bring in branded products like Nike NKE, which can leverage with Amazon's impressive logistics. AMZN also continues to expand its own private-label brand into new areas, ranging from apparel to lingerie to furniture and mattresses.

The overarching aim is to expand Amazon's consumer wallet share, with some estimates hinting that the company already receives 40%-45% of all digital-shopping dollars. A combination of an ever-expanding offering and more and more consumer dollars migrating online puts Amazon in a sweet spot. And we're seeing AMZN utilize the same playbook both inside and outside of the United States.

Lastly, as Chris Versace pointed out in January, the "third leg of the stool" for the company is Amazon Web Services (AWS), its high-margin cloud-computing business. According to Canalysis, AWS already enjoys some 30% of the cloud market, and is poised to benefit even further as businesses large and small embrace this cutting-edge technology.

All of this cash generation allows Amazon to both competitively grow its existing businesses and to disrupt other industries along the way. In fact, perhaps the only big unanswered question when it comes to Amazon is: "Which industry will it disrupt next?"

We might have gotten hint with its recent tie-up with JPMorgan Chase (JPM) and Berkshire Hathaway (BRK.A) , (BRK.B) -- a three-way venture that aims to tackle rising health-care costs. Health care is not only a business ripe for disruption, but also one that demographics say is poised to see meaningful growth market in the coming years.

Now, one thing that tends to put investors in the no-go zone with Amazon is the company's hefty price-to-earnings ratio -- more than 241x on a trailing-twelve-month basis.

However, we'd remind you that there are a number of valuation tools to use when looking at a stock. For Amazon, we'd recommend using the so-called "PEG ratio" (short for "Price to Earnings to Growth").

Analysts expect Amazon to grow its earnings 84% per year over the 2017-2019 timeframe. Based on analysts' consensus estimates of roughly $15.40 in 2019 earnings per share (up from only about $14 just weeks ago), Amazon currently trades at a reasonable PEG ratio of roughly 1.15.

For long-term investors who understand that Amazon is a stock to hold rather than trade, there's a windfall to be had as Amazon makes steady progress toward analysts' EPS expectations over the coming year.

It was little surprise that Wall Street's recent volatility would hit even the best stocks, and Amazon was no exception.

But when the average stock gave up more than 15% over a couple of weeks, Amazon bounced back with vigor, knocking on the door of all-time highs. This chart shows how the stock's uptrend remains intact, with a powerful pattern of higher highs and higher lows: 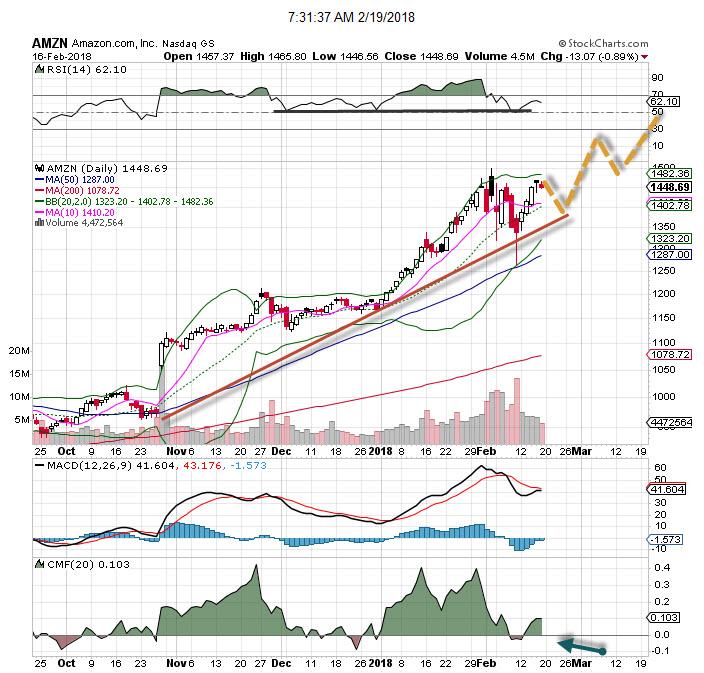 You can see that Amazon's Moving Average Convergence Divergence (MACD) is about to cross for another "Buy" signal, while a retest of 20-day moving average (the dotted line above) seems to have been successful. Chaikin Money Flow is also back to positive, while the RSI held firm during the recent selling.

Add it all up and we see Amazon taking the path of the dotted orange line at the upper right over the coming weeks, heading toward new highs and beyond the $1,500 level.

This white paper is part of a series of special in-depth reports on the FAANG stocks -- Facebook (FB) , Amazon, Apple (AAPL) , Netflix (NFLX) and Google/Alphabet (GOOG) , (GOOGL) . To check out all of the reports in this series, click here.

Get an email alert each time I write an article for Real Money. Click the "+Follow" next to my byline to this article.
TAGS: Investing | U.S. Equity | Technology | Consumer Discretionary | Stocks

Jim Cramer: In Times Like This, Go for the Easy Money

Look at the stocks you own. Can you tell me why you've got them? If you can't answer the following three questions, then have a look at several I like right now.

Here's Our Technical Strategy for Accenture Ahead of Earnings

Amazon Is Making an Upside Breakout, Prime Day or Not

I do not expect much price weakness.