Nike (NKE) is content to put on one shoe at a time, making a slow turn on the charts. Prices are still in a longer-term downtrend but we can now see breakout levels to monitor.

Let's see what's new on the charts and any subtle clues from the indicators.

In this updated daily bar chart of NKE, below, we can see that prices hit a low at the end of October/beginning of November around $50-$49. Prices made some retests of the $50 level in November and crawled higher in December and January. This month, NKE surged to the upside with prices moving up from $52 and besting $57 this week.

The trend-following Moving Average Convergence Divergence (MACD) oscillator has been in a bullish set up since early January.

In this three-year weekly chart of NKE, below, we can see that prices have rallied above the 40-week moving average line. It looks like the 40-week line has begun to flatten. The weekly OBV line is neutral but the MACD oscillator on this timeframe shows a cover shorts buy signal in December but it has yet to cross above the zero line for an outright go long signal.

In this Point and Figure chart of NKE, below, we can see that prices have been correcting lower since late 2015. The trend is still down but a trade at $60 on this chart would be a short-term breakout. 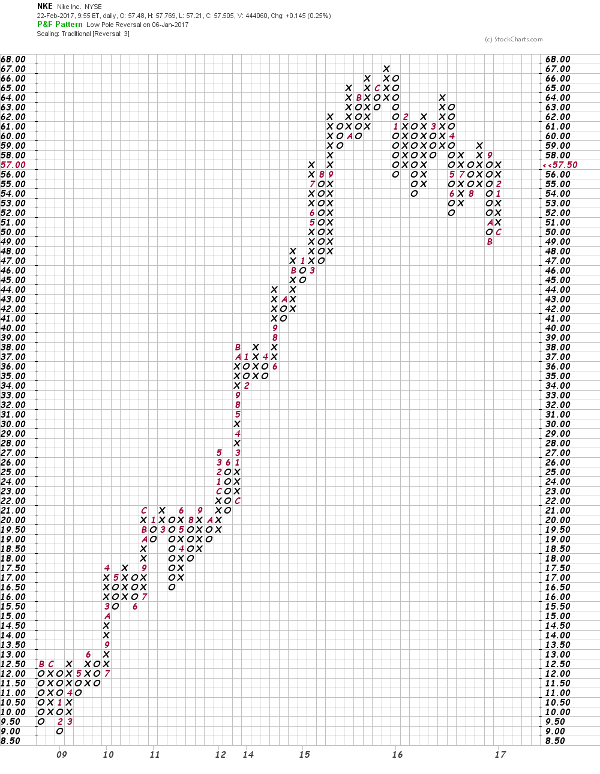 Bottom line: NKE is on better footing in the short-run but our longer-term charts need more evidence. Aggressive traders could probe the long side of NKE here risking a close below $54. Traders wanting more confirmation should wait for a close above $60 before entering the long side.

Get an email alert each time I write an article for Real Money. Click the "+Follow" next to my byline to this article.
TAGS: Investing | U.S. Equity | Consumer | Stocks