C.H. Robinson Worldwide (CHRW) made an important upside breakout this month, with prices breaking out of a two-year consolidation pattern. This member of the Dow Jones Transportation Average will do its part to lift the DJTA to new highs in the weeks ahead.

In this daily bar chart of CHRW, below, going back twelve months, we can see part of a larger consolidation pattern, with prices swinging between $60 and $77 dollars for two years. The fulcrum low of this considerable pattern was in early 2016.

Prices declined from $76 in April to $66 in November, but this pullback stops short of the early 2016 low, giving us a higher low. CHRW rallies strongly in November and early December to a new high that is unsustainable. Then it corrects into January before another upside attempt begins. Prices are above the rising, 50-day moving average line and the rising, 200-day line.

The On-Balance-Volume (OBV) line gives us some interesting bullish clues, as it bottoms ahead of prices in August and does not decline much when CHRW makes a low in November. The Moving Average Convergence Divergence (MACD) oscillator has been in a bullish setup from January.

In this three-year weekly chart of CHRW, above, we can see the sideways trading range that has kept prices in check for the past two years. Prices are above the rising, 40-week moving average line and the weekly OBV line is moving in the right direction -- even though it is well off its best levels. The weekly MACD oscillator has been positive since November, following a cover-shorts buy signal at the end of October. 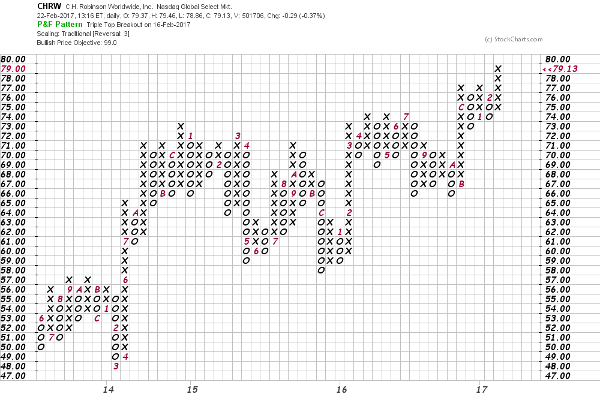 This Point and Figure chart of CHRW, above, shows the new highs and breakout at $78 and $79. Projecting a "count" of the columns to the upside gives us a $99 price target -- but we should round it up to $100, as price targets are often overrun in bull markets.