BankUnited (BKU) extended its upside run in recent days -- and our charts and indicators are in agreement that further gains lie ahead.

In this one-year daily chart of BKU, below, we can see a March/April peak followed by a decline to a late June low, and a retest in October and early November before the post-election rally took over in earnest. The bull came in hard and fast in November, with prices surging above the 50-day and 200-day moving averages. A bullish golden cross of these two averages can be seen in December.

The On-Balance-Volume (OBV) line began to rise with the price action in November as traders and investors became more aggressive. The Moving Average Convergence Divergence (MACD) oscillator gave a strong buy signal in November, when it crossed above the zero line.

This three-year weekly chart of BKU, above, shows both the broad sideways trading pattern from 2014 to the end of 2016 and the recent breakout to new highs. BKU is now above the rising, 40-week moving average line, with a very bullish MACD oscillator. The only indicator that is not yet "in gear" is the weekly OBV line. 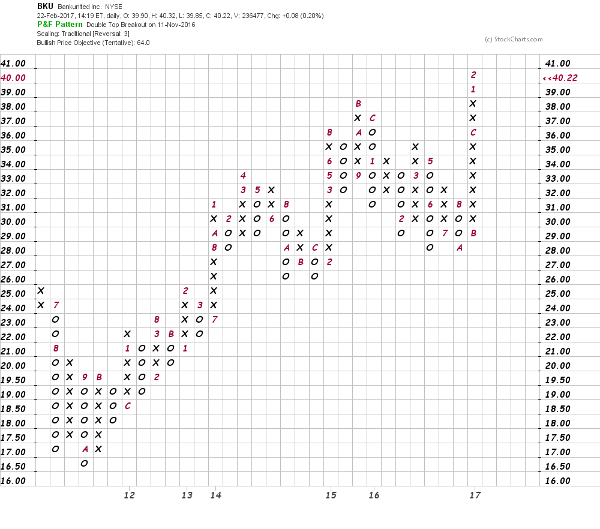 This Point and Figure chart of BKU, above, weeds out the noise and non-important jiggles. The breakout over the late 2015 zenith is clear on this chart. The new high at $39 and $40 (the number 1 and number 2) cannot be missed -- and allows us to project an upside target of $64.

Bottom line: Traders should approach the long side of BKU on a dip towards $39 if possible risking below $36.50 for now. $64 is our long-term upside price target.

The shares have been under selling pressure since early August.

3 Blue Chips About to Go from Bad to Worse

The charts of Boeing, Dow Inc. and Visa indicate these stocks aren't finished retreating even as the Dow Industrials, of which they are a part, climb.

Here's our price target for now.