Cabot Oil & Gas (COG) is due to report its latest earning's figures at the end of this week. Prices have already declined sharply since November so what might we have to look forward to? Let's check out the latest charts and indicators.

In this daily bar chart of COG, below, we can see that COG broke an eight month uptrend and the 200-day moving average line in recent weeks. The tipping point looks like it was January so let's look closer.

The On-Balance-Volume (OBV) line peaked in November and has generally moved lower telling us that sellers of COG have been more aggressive. COG basically made twin price peaks in November and early January but the 12-day momentum study made lower peaks telling us the power behind the second peak or rally was much weaker. Prices made a sharp low in early February and momentum did too.

In this weekly bar chart of COG, below, we can that prices have made a number of closes below the flat 40-week moving average line. There is chart support below the market in the $22-$20 area but if COG breaks we could see a deeper decline to the $16 area.

The weekly OBV line has been positive the past two years but it could be peaking recently. The trend-following Moving Average Convergence Divergence (MACD) oscillator is in a bearish mode and slipping below the zero line for an outright sell signal.

In this Point and Figure chart of COG we can see that the 2016-2018 rally in COG is more like a recover from the 2014-2016 decline. Prices have been moving sideways to higher since last February and a decline to $22.00 could break that trend. 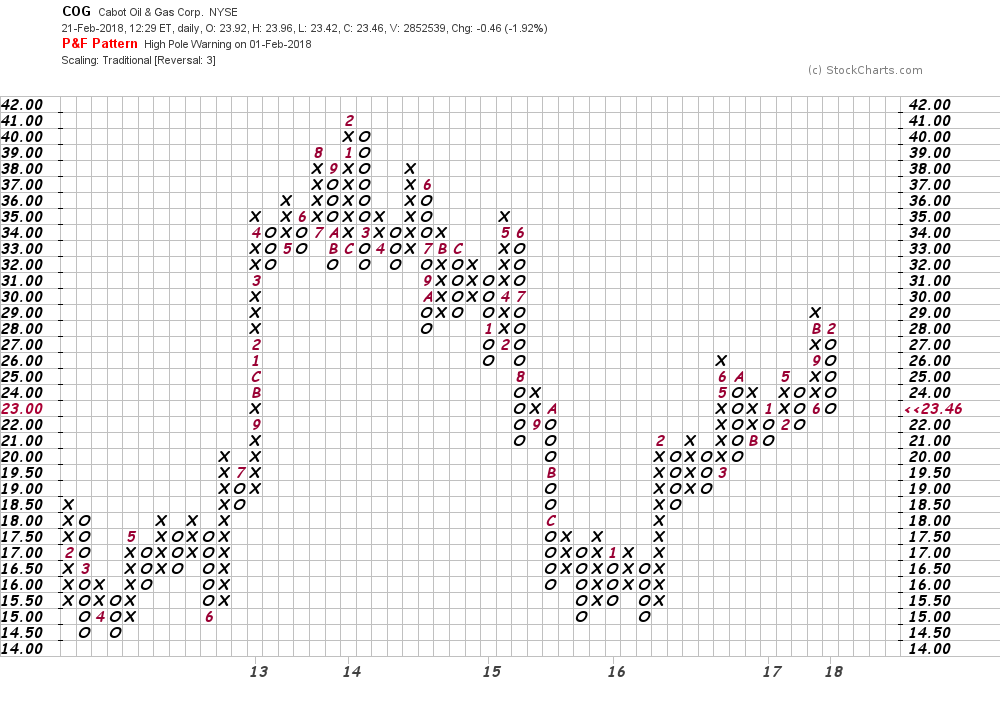 Bottom line: COG is fairly oversold so we could bounce in the short-run. The upside will probably be capped by the flat 200-day average line around $26. Closes below $22 and $20, should it happen, are likely to generate further prices weakness.

Get an email alert each time I write an article for Real Money. Click the "+Follow" next to my byline to this article.
TAGS: Investing | U.S. Equity | Energy | Oil Equipment/Services | Stocks