Alphabet Inc. (GOOG) ,  (GOOGL) was reviewed last year around the middle of December where I wrote, "A strong close above $1,060 could ignite the bull again while a close below $1,000 could mark a high for now." With the benefit of 20/20 hindsight we can see that the bull was refreshed and GOOGL rallied above $1,060 and climbed up to $1,200 by the end of January.

A sharp sell off earlier this month quickly took GOOGL down to our bearish threshold of $1,000 but we did not close below it. With prices roughly in the middle of its $1,200 to $1,000 high/low range a fresh look at the charts and indicators would be a good idea right now.

In this daily bar chart of GOOGL, below, we can see a mixed picture now for the indicators. Prices nose-dived at the beginning of the month with a sharp gap to the downside and heavy volume GOOGL quickly broke the flat 50-day moving average line and retested the rising 200-day moving average line. Prices have rebounded in the past week but the volume of trading diminished from the heavy pace on the decline.

The On-Balance-Volume (OBV) line peaked in late January and declined. The line has improved in the past week as prices rebounded but it is still below its best levels. The Moving Average Convergence Divergence (MACD) oscillator is below the zero line but the two moving averages that make up this indicator have begun to narrow. If the two line cross we could have a cover shorts buy signal in the days ahead.

In this weekly bar chart of GOOGL, below, we also have mixed signals. Prices are still above the rising 40-week moving average line after testing it two weeks ago. The weekly OBV line does not show much erosion but the weekly MACD oscillator has crossed to the downside for a take profits sell signal or a sell when the stock is still in an uptrend. 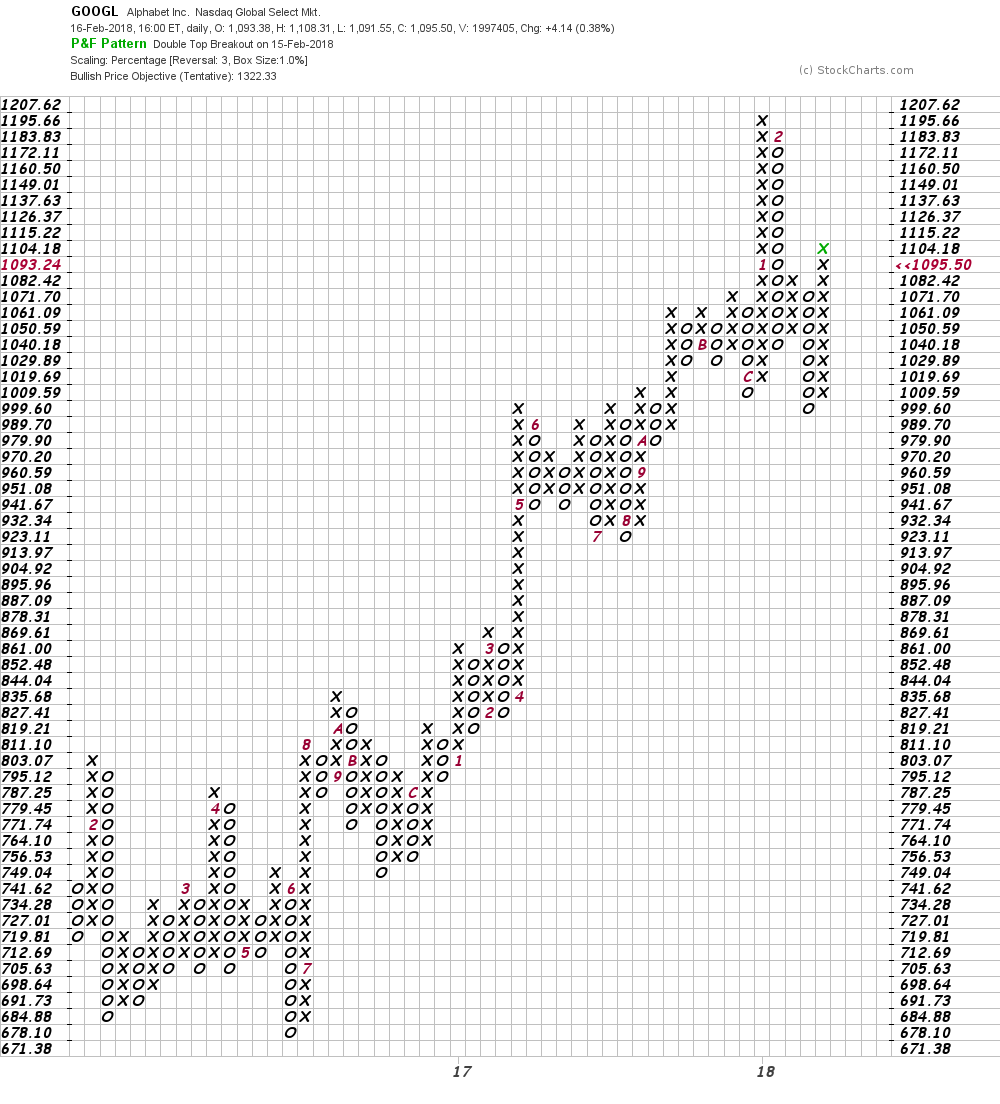 Bottom line: With mixed technical signals and prices in the middle of their February range I would say that the bulls and the bears are in balance. This balance will not last for long and a new sustained trend will emerge probably by late March. With a number of bullish sentiment readings at or near extremes, and individuals and professionals strongly believing in "buy the dip", I feel that there is a greater risk for price weakness as the first quarter comes to an end.

This column is part of a series of special in-depth reports on the FAANG stocks -- Facebook (FB) , Amazon (AMZN) , Apple (AAPL) , Netflix (NFLX) and Google/Alphabet. To check out all of the reports in this series, click here.